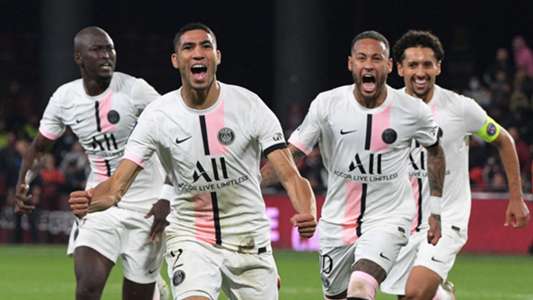 Herve Renard insists he is not surprised with Achraf Hakimi’s great start with French heavyweights PSG.

The Atlas Lion was signed by the Parisians from Inter Milan and is currently one of their key players. It is not surprising for the 52-year-old who insisted he anticipated the same level of performance from the defender.

“No, that doesn’t surprise me at all. I said that before the official games started,” Renard told Goal.

“He’s one of the best full-backs in the world and it’s no coincidence that he’s here. When you are able to score nine goals with Dortmund and seven with Inter Milan in the league, there it is, three with PSG, it is that you have immense qualities. It’s not a surprise and it is not finished surprising yet.

“Since the start of the season, he has shown a lot of qualities, but we also feel that he has a fairly large margin for improvement.”

The former Morocco coach is not doubtful of Hakimi’s attacking ability, but he believes he has to work on his defensive aspect as well despite playing as a right-back for PSG.

“In Italy, he learned to defend better. This was where he needed to perform the most,” Renard continued.

“But his urge to attack means he has to put in a lot of effort to attack. In the defensive concentration, he still has to progress, but with maturity, he will still evolve on this point.

“When you are a coach, you just have to tell him things frankly and it works. He has to stay the same despite the ever-increasing media coverage and the fact that he is one of the best right-backs in the world today. I wish him to keep his feet on the ground and I think there will be no problem.”

“He’s also always smiling, he’s a simple guy who loves football and he lives his dreams with all his youth and innocence. And I hope he stays innocent for as long as possible.”

The North African will be playing for PSG against Manchester City in the Champions League on Tuesday night.