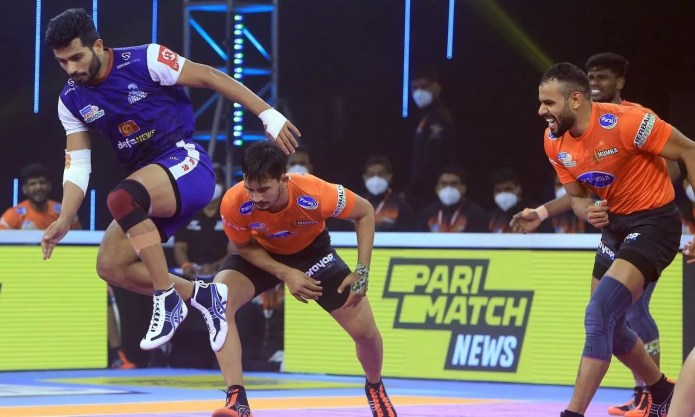 Haryana Steelers beat U Mumba: Vikash Kandola was the star for Haryana Steelers as they beat U Mumba 37-26 in match 113 of vivo Pro Kabaddi League Season 8. Vikash (14 points) and Ashish (13 points) scored Super 10s as Haryana controlled the match right from the first whistle to clinch a win that will almost guarantee a place in the playoff. With 63 points in 20 matches they might even get a Top 2 finish if other results go in their favour. Follow InsideSport.IN for more updates.

U Mumba never really settled on the mat with their usually reliable captain Fazel Atrachali having a poor outing. The loss will hamper Mumbai’s chances of making it to the Season 8 eliminators. Haryana started the match on the front foot with their captain Vikash Kandola leading the raids. He found easy points from the Mumbai defence and their leader Fazel Atrachali. At the other end, Mumbai’s Abhishek Singh kept upsetting the rhythm of the Haryana defenders with clever hand touches. But it was Haryana’s early pressure that paid dividends when Vikash Kandola clinched a 3-point raid and inflicted an ALL OUT in the 13 th minute. That opened an 8-point lead for coach Rakesh Kumar’s Steelers.

But Mumbai immediately staged a comeback. – Ajith Kumar also joined in the attack as Mumbai smelled an ALL OUT. Ashish however delayed Mumbai’s march with a few clever raid points. The first half ended before Mumbai could clinch it with the scores 13-18 and Haryana in the lead.

U Mumba finally got their ALL OUT in the first minute of the second half to make it a 2-point match. Ajith Kumar and Abhishek Singh kept picking up the points as Mumbai kept piling the pressure on Haryana. But they answered in kind with Ashish aiding Vikash Kandola in the raids. The scores were 24-22 in favour of the Steelers with 10 minutes on the clock.

Haryana’s defence improved their game after the Time Out. Left corner defender Surender Nada was at the heart of all the tackles as they once again opened a healthy 6-point lead. Raider Vikash Kandola also worked his magic at the other end to clinch a Super 10. The scores were 29-23 with less than 5 minutes remaining. Coach Rakesh Kumar asked his Haryana team to slow down the match in the final minutes but his men kept picking points at will. They got another ALL OUT with a minute remaining to widen the lead to 9 points. They added more points to end the match with a comfortable 11-point margin.

For more sports news and updates, follow us at Insidesport.IN