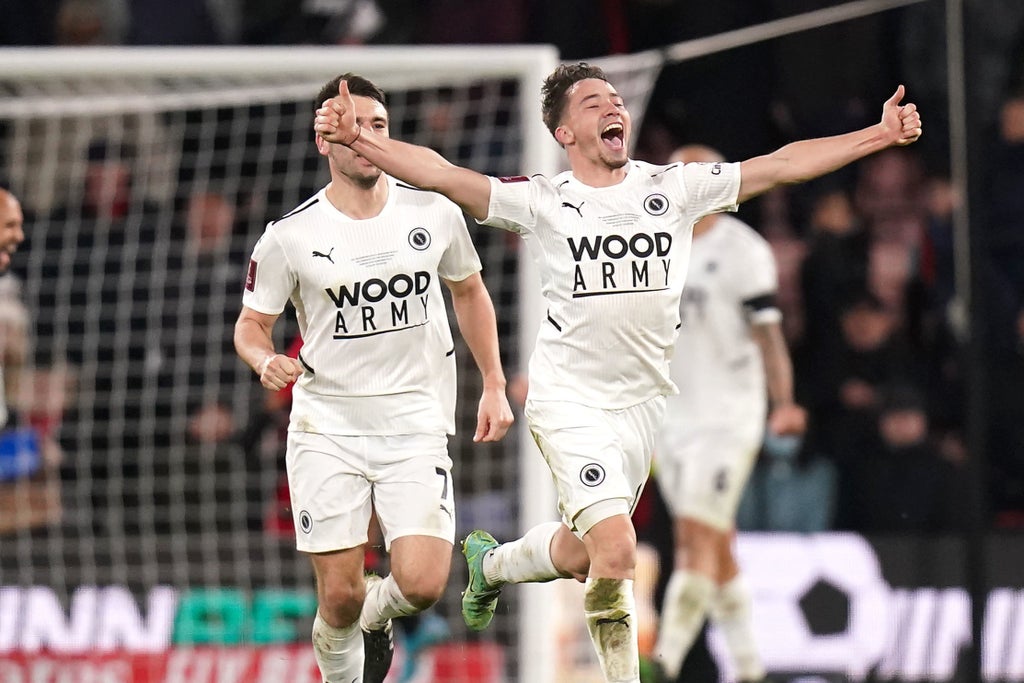 Boreham Wood captain Mark Ricketts described the club’s FA Cup third-round win over AFC Wimbledon as the highlight of his career, but after this victory against Bournemouth that is no longer the case.

The veteran midfielder scored the only goal of this fourth-round tie to create history for his non-league team and leave Championship Bournemouth stunned.

Make no mistake, Boreham Wood deserved this win and their reward is a trip to Everton in the next round. Their 1,400 travelling fans were singing “we’re off to Wembley” at full-time, but for now Goodison Park will have to do.

Ricketts’ goal is the reason they are there, with the midfielder finding the net in the 38th minute. The 37-year-old, who came through the youth ranks at Charlton when Bournemouth boss Scott Parker was thriving in the first team, passed the ball into the bottom corner off the post after Jacob Mendy’s cut-back had found its target.

That sent the Boreham Wood fans wild and suddenly they were not 1,400 people, but just one mass of limbs. It was a pinch-me moment for each and everyone of them, however even their most die-hard supporter would have been scared of getting carried away.

There was still plenty of time for Bournemouth, who are currently third in the Championship, to get back into the game and you were waiting for the onslaught to come.

They made nine changes for this cup tie, but it was still a squad littered with talent – particularly on the bench.

Indeed, Ryan Christie and Todd Cantwell were thrown on at half-time. Jack Stacey and Philip Billing arrived midway through the second half, before Dominic Solanke completed the cavalry charge 15 minutes before the end.

That underlined the gulf between these two sides, as did the fact that Bournemouth signed five players on transfer deadline day. One of those was Nathaniel Phillips, who has played in the Champions League this season and started here. Boreham Wood, by contrast, had just five substitutes.

They fought and battled like their lives depended on it, though, and Bournemouth had no answer. The hosts had plenty of possession, 82 per cent in fact, but they mustered just two shots on target.

Both of those came in the final 15 minutes, which was the only time Boreham Wood really looked under pressure.

Other than that, the National League side kept Bournemouth at bay. Ricketts, a qualified personal trainer, was a monster in the heart of midfield, running himself into the ground to the extent you suspect he could have a few more clients after this performance.

There were heroes everywhere, though. David Stephens in the heart of the back three was colossal, clattering and clearing anything that dared get near Boreham Wood’s goal.

Out wide, Kane Smith was a terrier up and down the wing, with his reward being a trip to his boyhood club Everton in the next round.

Boreham Wood will head to Merseyside full of belief as their magical FA Cup run continues. Their owner, Danny Hunter, looked close to tears at full-time as he and manager Luke Garrard embraced in the stands – and who can blame him.

Hunter remortgaged his house during the Covid-19 pandemic to keep the club going, and now they are fighting for promotion to the Football League and in the fifth round of the FA Cup.

Even the filmmakers who work at Elstree Studios, just a stone’s throw from Boreham Wood, couldn’t write a script like this. And the story isn’t over yet.