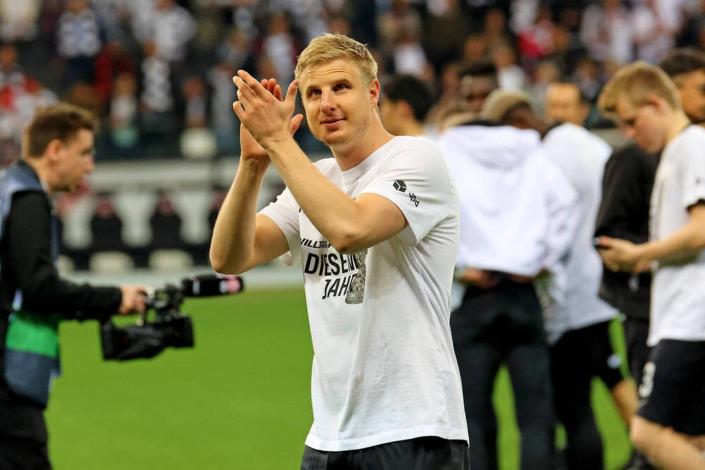 But the Austrian not only leaves the Europa League winner, he even hangs up his football boots completely as a consequence of the business relationship affair with a right-wing populist politician.

As the SGE announced in a press release on Thursday, the 29-year-old had decided to “end his career as an active professional footballer”.

Hinteregger declares the end of his career
In the club’s letter, the centre-back explained the reasons behind the move. The wording of the resignation statement:

“I had my first thoughts of retiring after the season last fall. I found myself in a difficult phase in terms of sport: my performance was fluctuating. The victories didn’t feel so good anymore, but every defeat hurt twice as much.

My performance boost in the spring and our joint successes in the Europa League motivated me all the more to say goodbye with a great sporting success. I enjoyed the Europa League win so much because I knew then that it would be my last big victory celebration with the fantastic fans in this city, which has become my second home.

I will only look back on my time at Eintracht with great gratitude and joy, continue to feel close ties to the club and its supporters and support the team as it continues through Europe as a fan. I would like to thank my teammates, the coaching team, the team behind the team, all employees and the sporting management for the trust, support and the fantastic time I was able to experience here – above all I thank the fans, who always have my back have stood, especially in difficult times.

In the past few weeks, a number of topics have arisen about my Hinti Cup, which I have held with heart and soul and with a clear conscience, the scope of which only became clear to me afterwards. Emotional, maybe thoughtless words from me have led to irritation and I would like to apologize for that. I am very sorry.

To say it again very clearly: I condemn right-wing, intolerant and inhuman ideas in the strongest terms. Anyone who knows me knows that. First of all, I need to gain some distance and reorient my life. I’m grateful that Eintracht gives me the opportunity to take this step now.”