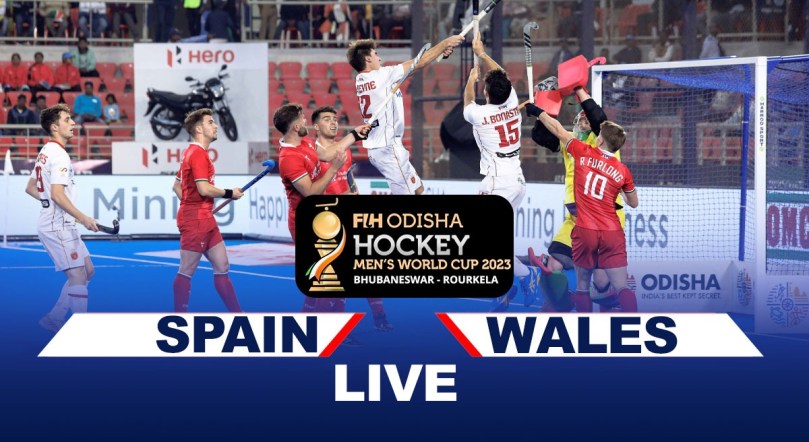 Hockey World CUP LIVE – Spain vs Wales LIVE, India vs England LIVE at 7PM: Third day action at the Hockey World Cup has begun. Spain are in action against Wales. After a goal-less first quarter, Spain scored two goals in the second quarter to end the first half 2-0. They are continuing their good show as they have scored one more goal and lead 4-0. Later, India will face a stern test when they take on an equally impressive England in their second pool match of the FIH Men’s Hockey World Cup tonight. India outclassed Spain 2-0 with a near flawless show. England blanked Wales 5-0. Whoever wins between India & England today will enter Quarterfinals without much fuss. Follow Indian Hockey Team LIVE & INDIA England Hockey match LIVE Updates with InsideSport.IN

On Super Sunday, hosts India will play England in the second Pool D matchup. The Blues will play at 7 p.m

The home team cannot drop the intensity and quality it showed against Spain. England too are on a high after a 5-0 thrashing of Wales in their opening match. “We are up against England next and it will be tougher, they are ranked higher than us. We know how tough England were in the Commonwealth Games,” Reid said.

Last year, the two sides faced each other three times with their last match played at the Commonwealth Games in Birmingham, ending 4-4 in the group stage. They played out a 3-3 draw in the first leg of the Pro League match before India won 4-3 in the second, both games played in April.

“So, we will try to continue our good work (from the Spain match). We did really well defensively (against Spain), we have to continue it,” Reid added.

Check what Indian Captain has to say? Captain Harmanpreet Singh agreed that England would be tough opponents and the home side will have to play their best hockey to beat them. “We are taking it match by match. Spain is done now and our focus is on England and we are planning for that,” he said.

“Winning penalty corners is very important and we can be better in PC conversion. We are hoping we will do better in that regard,” said the dragflicker who was not at his best in the match against Spain.