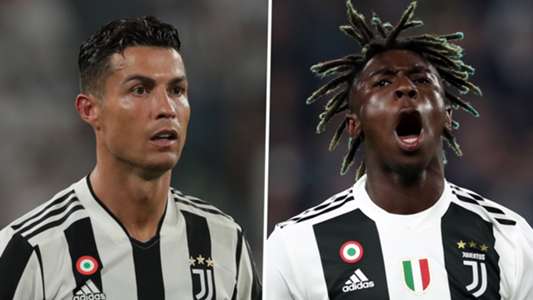 Moise Kean was the man Juventus turned to after seeing Cristiano Ronaldo depart for Manchester United, but the 21-year-old says he does not “feel any pressure” filling the boots of the five-time Ballon d’Or winner in Turin.

The Bianconeri found themselves a striker light as the summer transfer window prepared to close, with the iconic Portuguese walking away from the final year of his contract as he headed back to Old Trafford.

Massimiliano Allegri has various other options at his disposal, including Paulo Dybala and Alvaro Morata, but Kean – who stepped out of the club’s academy system in 2016 – was the man drafted in following Ronaldo’s exit as a two-year loan deal was struck with Everton.

On being asked to help fill the void created by the departure of an all-time great, Kean told reporters: “I don’t feel any pressure in replacing Ronaldo.

“I just want to lend a hand to the team where I grew up and where I lived good times.

“I just want to play, I have no pressure, I just feel the responsibility of wearing the Juventus shirt.”

He added: “I’ve always loved playing for this club. As soon as the opportunity arose, there was no doubt in my mind and I made the right choice. Juventus have always had a place in my heart.

“I’m very lucky to have experienced different leagues like the Premier League and Ligue 1 at my age. I’ve learnt a lot and now I’m ready to give my all for this team.

“I’m here to help the team. This is the club where I grew up and I have lots of great memories. I do feel a sense of responsibility in playing for Juve but it’s not a burden.

“We have a young team with lots of experience. We haven’t made the best of starts but Juventus always aim high and I’m sure we’ll achieve great results.

“Allegri is a coach who always aims for the top and he’s taught me lots of things. The Malmo game was good for morale. We’re ready for our match against AC Milan on Sunday.”

How many goals has Kean scored in his career?

Kean hit eight goals through 21 appearances for Juve during his first spell at the club, which included a loan stint at Hellas Verona in 2017-18.

He left for Everton in 2019, but struggled to make an impact in English football and has registered just four efforts for the Toffees in 39 outings.

A spark was found, though, during a loan spell at Paris Saint-Germain last season, with the target found on 17 occasions for the Ligue 1 giants.

He is now back in familiar surroundings and looking to prove his worth at Juve, with Kean also looking to add to his collection of 10 caps and four goals for Italy after missing out on a place in their triumphant Euro 2020 squad.