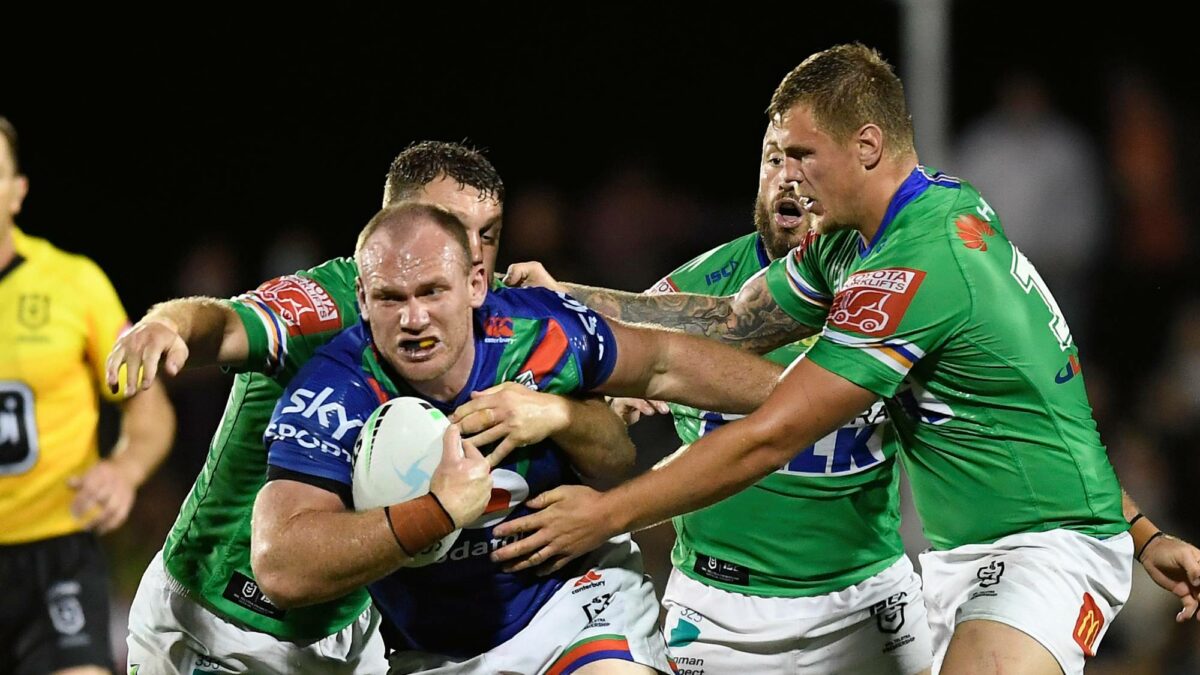 What started as a Warriors golden-point heist over the Raiders last Saturday quickly escalated the morning after.

The seemingly innocuous incident happened in the final two minutes with the Warriors behind 20-18. After a regular hit-up inside Canberra’s red zone, Lodge refused to get to his feet and play the ball.

For on-field referee Chris Butler, it was a case of nothing to see here, move along.

But in a cruel twist, the Raiders eventually fell in the aftermath of Lodge’s steadfast refusal to move. The break in play long enough for the bunker to conclude Horsburgh’s seemingly incidental contact with the head was a reportable offense.

The penalty saw the Warriors regain the momentum, leveling the scores from the tee before Shaun Johnson’s field-goal iced the win two minutes into extra time.

Days later, video referee Steve Chiddy became a bunker casualty. Sacked from his post, and much like the Raiders, dudded by Lodge’s gamesmanship.

It was a minor consolation for Ricky Stuart. But the Raiders coach hit back in the aftermath. Still scratching his head on Thursday, he was adamant the bunker should only be called upon to judge contentious tries. Adding, the fabric of the game has been compromised.

The one thing that hasn’t changed, is that one team’s howler is another’s treasure. From the stud-spanner era to the seclusion of today’s multi-screen lairs, for the most part, the ref with the whistle or tele-remote upsets half the viewers. Matt Lodge of the Warriors. (Photo by Ian Hitchcock/Getty Images)

On another day with different referees, last week’s Redcliffe con-job may have escaped sanction. Canberra may well have got the result, but the howler would not have changed, just the colour of its jumper.

For Stuart, there’s a layer of the game’s fabric compromised by ad hoc bunker replays. The ones that erode continuity and suck the life from big moments. Like the magic try, awarded on field only for the joy to be crushed by irrelevant bunker forensics.

Those in support of endless reviews say it’s for the best. They say that modern technology is foolproof.

In reality, technology will never take adjudication to the land of milk and honey, it’s just another layer of dispute.

In days of old, a knock-on missed by the naked eye was a howler, it’s no different to turning a blind-eye to freeze frame separation, it’s still a howler.

Referee disputes date back to Dally Messenger, and no matter the technology, so long as a Steeden requires air, they are here to stay.

The game wasn’t designed in slow motion so why adjudicate in slow motion? If it is acceptable to the naked eye, that should be the line in the sand.

Talk of bad calls ruining careers and deciding premierships as a means to justify forensic bunker analysis just don’t cut it. Referees will always make mistakes, regardless of speed and magnification.

Last year Peter V’landys tweaked every leaver within reach to speed the game up, yet excessive bunker input has strangled the progress.

If mid-season rule changes are a thing, then surely the NRL can preserve the fabric of continuity and eliminate the fakes.