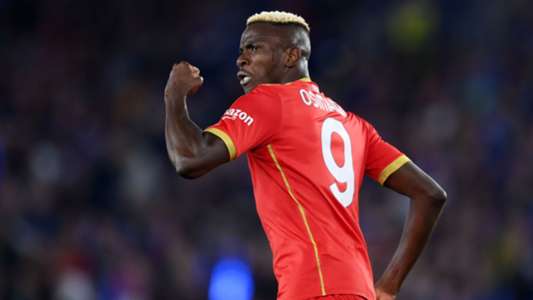 Victor Osimhen believes he has a lot to offer Napoli after his double enabled the Italian side to secure a 2-2 draw against Leicester City in a Europa League fixture on Thursday.

The 22-year-old Nigeria international came to the rescue of Napoli after he scored two second-half goals to earn his side a point from the Group C battle at King Power Stadium.

It was Leicester who took an early lead through Ayoze Perez and doubled their advantage on the hour mark through Harvey Barnes, but an improved second-half display saw the visitors level proceedings courtesy of Osimhen, who scored from a well-worked team goal before heading in the second after a cross from Matteo Politano.

Osimhen, who was doubtful for the opening game of their Europa League campaign, has praised the team’s effort for helping them to claw back and pick up an important point away.

“I’m happy and we played as a team, even when we went two goals down, we kept playing as a team,” Osimhen said as quoted by Sky Sport Italia.

“I don’t want to set an objective. The club always believed in me, starting with these two goals is certainly important and I want to continue like this.”

Though his debut campaign has been distracted by injuries and at one time Covid-19, the Super Eagle feels he has a lot to offer Napoli if he stays healthy.

“I have everything to give to Napoli, I want to stay healthy, avoid injuries and one step at a time we can together achieve our targets,” Osimhen continued.

“The team started the right way, then lost the ball a few too many times building out from the back and those proved costly,” Spalletti told Sky Sport Italia.

“After that, we took the initiative throughout and it remained a perfectly balanced match. We reacted to conceding the second goal just as we were really pushing, and that was a risky situation because we could’ve let our heads drop.

“Instead, we pushed even harder and got it back on level terms, because it frankly would’ve been unjust if we had lost this game.

“We saw today that this team has a strong character, which had been a weakness in previous years. The team reacted really well.

“I want to compliment those who came off the bench because they proved their quality and it makes it easier for everyone because they are not fighting to take the place of another teammate but to play alongside him.”