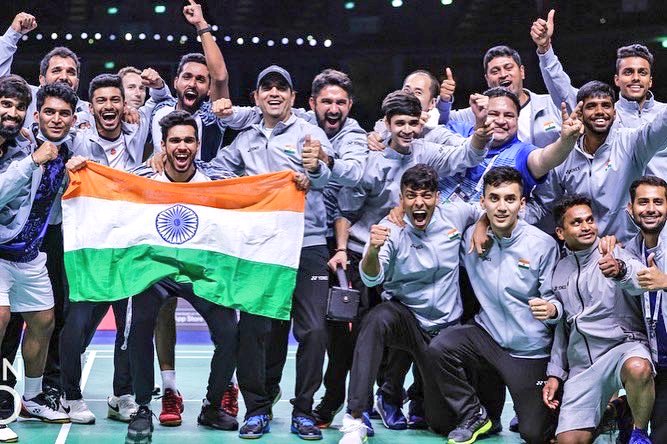 India beat Denmark Highlights – India in Thomas Cup Finals: India started on a bad note in the semifinals against Denmark.

But Satwiksairaj Reddy and Chirag Shetty won a very crucial doubles tie against the Danish pair of Astrup & Christiansen in 3 sets. The tie got levelled at 1-1.

Kidambi Srikanth continued his unbeaten run in the Thomas Cup as he defeated Anders Antonsen 21-18, 12-21, 21-15 to give much India 2-1 lead. Denmark again fought back by winning the 2nd doubles.

HS Prannoy lost the opening game to Remus Gemke. But kept his composure and cool win the next 2 by 21-9, 21-13 margin.

In the 2nd Semifinal – Indonesia defeated Japan by 3-2. On Thursday, India defeated 5 times champions Malayasia in the quarterfinal

While India clinched a 3-2 victory over five-time champions Malaysia, Denmark entered the contest after defeating Korea 3-2.

It’s a win for @PRANNOYHSPRI & #TeamIndia secured the 1️⃣st ever medal at #ThomasCup (New format) and have booked a spot in the semis after 4️⃣3️⃣ years beating 5️⃣ times champion #TeamMalaysia 💪#TUC2022#Bangkok2022#ThomasCup2022#IndiaontheRise#Badminton pic.twitter.com/30nJfAn22c

The LIVE Streaming of the world’s biggest badminton team championship will be LIVE Streamed on Voot Select.

The match is scheduled to begin at 4.30 pm IST

Fans in India can watch the Thomas Uber Cup 2022 LIVE Broadcast on Sports18. The LIVE Streaming of the world’s biggest badminton team championship will be LIVE Streamed on Voot Select.