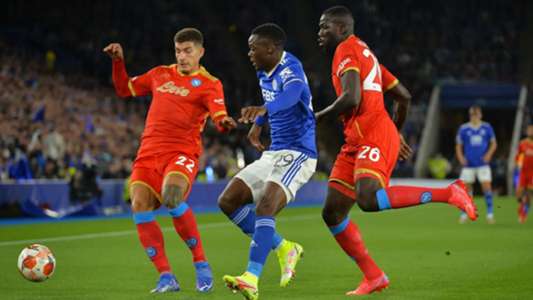 Leicester City striker Patson Daka was left disappointed after his goal against Napoli in the Europa League was disallowed by VAR on Thursday night.

The 22-year-old Zambia international, who joined the Foxes from Red Bull Salzburg, was handed his full debut by manager Brendan Rodgers in the game at King Power Stadium, and he thought he had scored his first goal for the side in the 59th minute after Nigeria striker Kelechi Iheanacho and Youri Tielemans combined to set him up.

Daka then riffled the ball into the bottom corner but VAR interjected to rule the strike out for offside.

Leicester had taken the lead in the Group C fixture after Ayoze Perez scored in the ninth minute before Harvey Barnes made it 2-0 in the 64th minute, but a double from Nigeria striker Victor Osimhen in the 69th and 87th minutes ensured Napoli secured a 2-2 draw.

Daka has explained his disappointment at his effort being disallowed but said it will motivate him more to score in future assignments.

“I am disappointed [then he smiled], ahh, it was almost a dream come true for me, I was really ahh, [shaking his head], out of words, like I was lost in the moment, I was overwhelmed, I was happy and just immediately when I saw the referee waiting on VAR I just knew there was little chance for me to get the goal,” Daka told Leicester TV after the game.

“I didn’t know that I was offside, so I was waiting for him to start the game and just saw him waiting and I knew like something wasn’t right, I was really disappointed that I didn’t get my first goal for the club.

“It was a positive thing for me nevertheless, I think it was just unfortunate the goal didn’t count but it gives me a lot of confidence going forward because I still have a lot of opportunities to come and I know where the goal is.”

“It was a tough game and we knew it was going to be a tough game and I think it was really important for me personally to get some minutes and at the end of the day we are just disappointed we didn’t manage to get the three points,”

“It was really a beautiful goal from Ayoze [Perez], it was really a great team goal the atmosphere was really great, it was crazy, it was amazing, the fans came in numbers to push us, to give us the extra energy that we needed and it was just unlucky that the great start we had didn’t come out to be a good ending.

“We are not pleased with the outcome of the game but we have a lot of positives we can take from this game and take us to the next game on Sunday, we have got something to build on Sunday, and our performance today can be improved and collect maximum points.”

Leicester will turn their focus to the Premier League where they have an away game against Brighton & Hove Albion at Falmer Stadium on Sunday.