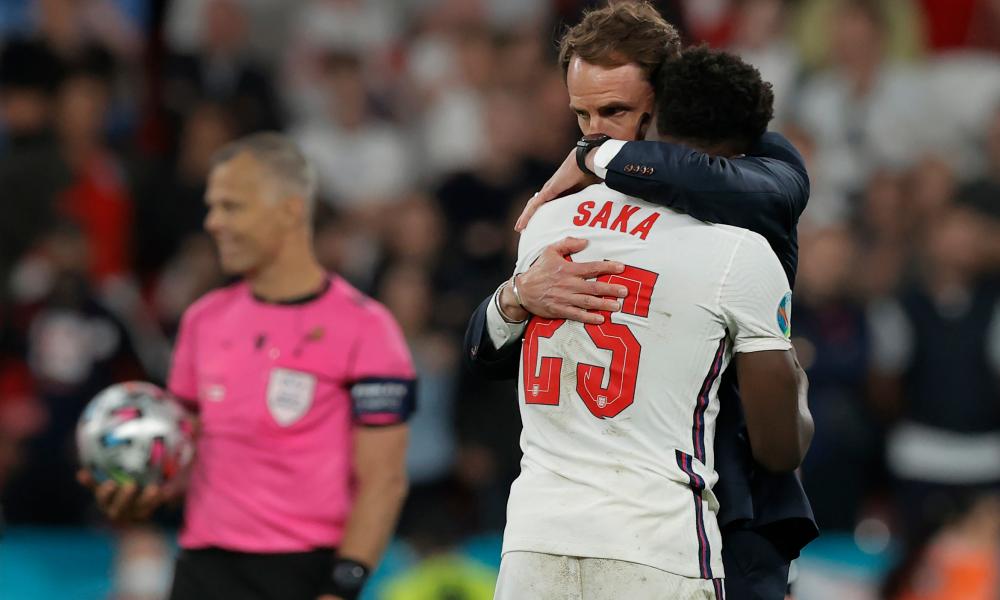 While defeat to the Azzurri in the Euro 2020 final remains fresh in the memory, schadenfreude is not Southgate’s style

To Gareth Southgate, it was a reminder of one of England’s darkest days. As Italy laboured to break down North Macedonia in Thursday night’s World Cup playoff, rushing their choices as the pressure rose inexorably, Southgate was taken back to Euro 2016 in France and the horror show that was the last-16 exit against Iceland – a defeat that would lead, in the end, to his appointment as the England manager.

On this occasion, Italy suffered the knockout blow late on, conceding the decisive goal in stoppage time, but it added up to the same thing – a tournament dream in ruins. The European champions will not be going to Qatar at the end of the year and the sense of shock remains profound.

“I think a part of it ended up being anxiety, the longer it went, as well … making the right decisions under pressure,” Southgate said. “That’s something we’ve spoken about a lot from when we took over because we had a game like that in France six years ago. Thursday night’s game reminded me a little bit of that. As it reminded me of Italy’s playoff with Sweden before the last World Cup [which they also lost] when you suddenly got the feel that, yeah, it was getting more and more tense.”

Delivering when the heat is on is the name of the game and Southgate had a message for his players after they met to prepare for the Wembley friendlies against Switzerland and Ivory Coast on Saturday and on Tuesday respectively.

“In terms of pressure, we will never … I said this to the players the other day … they’ll never experience pressure like they felt last summer,” Southgate said with a nod towards Euro 2020, which ended with the penalty shootout loss to Italy in the final. “To be in a European Championship where the majority of the games were at Wembley and having not been to a final for 55 years … They’ve lived through enormous pressure so that should give them tremendous confidence in what they’re capable of.”

What Southgate really wanted to stress in the wake of Italy’s demise and as the countdown to Qatar becomes louder – it is the draw next Friday – was how it shone a favourable light on the mentality that he has instilled in his squad.

Have Italy struggled to refocus after the glorious high of last summer? Nobody in England can say. Yet it is clear that Southgate’s players have been able to move on from the crushing low.

“What our team have done really well is recover from the disappointment of the summer and manage to sustain performance,” Southgate said. “We wanted to sustain performance after the World Cup in Russia [in 2018]. We knew that if we didn’t, we would be accused of having had an easy draw [to the semi-finals], being a flash in the pan, and the players responded to that in the Nations League that followed.

“They then responded to that in the European Championship and they responded to that again to make sure we got the World Cup qualification nailed, in particular in Budapest [in the 4-0 win over Hungary last September].”

As Southgate and the midfielder Jordan Henderson pointed out, qualification should not be taken for granted, even if it normally is. “That [Italy’s exit] shows if you’re not 100% at it, you can be punished,” Henderson said.

England cannot allow their levels to drop, even if Switzerland and Ivory Coast are friendlies, because the preparation windows are almost worryingly short before the World Cup kicks off on 21 November. Southgate has only two more international breaks after this one – in June and September, when England will play four and two Nations League ties respectively – and the curiosities of a November tournament feel numerous and daunting.

Southgate described it as “more complicated”, arguing he and the players had disproved the notion that those at the end of a season were too physically demanding. This time, the concern is over the volume of matches before the leagues pause – the Premier League will do so after the games on 13 November.

“It’s a really condensed programme of regular midweeks as well as the Saturdays so we’re not sure what kind of impact that will have injury-wise,” Southgate said.

Related: What now for Italy after catastrophe of missing second World Cup in a row? | Nicky Bandini

Surely the biggest worry is the tightness of the turnaround between the temporary halt to the club programme and the beginning of the World Cup, which will not allow Southgate to schedule a warm-up fixture. England face Germany at Wembley on 26 September. Their next game will be the first of their World Cup group.

“The fact that there’s seven to 10 days between the last league game and the first game of the tournament is quite an extreme situation,” Southgate said. “Because we’ve got to factor in flying, getting over the time difference, some climate change within that and trying not to disrupt the training pattern too much across those days.

“Medically, there will also be some big calls. The scenario we had with Kalvin Phillips last summer where he popped his shoulder in the 92nd minute of the last game [for Leeds] … that’s going to take a really quick call this time. There is going to need to be a lot of collaboration with clubs. I think we’ve identified all of the issues. Now it’s just having the plans to deal with them.”

Southgate has, as ever, been forced to contend with a glut of injury withdrawals and the loss of Bukayo Saka after a positive Covid test is a headache in keeping with these disorientating times. “I think you can carry on now in normal life [after testing positive] but the football rules are a bit different,” Southgate said. “I am in a maze of confusion, frankly.”

Switzerland, quarter-finalists at the Euros and unbeaten and thriving in seven games under their new manager, Murat Yakin, will provide a stern test at a sold-out Wembley. Just ask Italy. It was the Swiss who finished on top of their World Cup qualifying group, having drawn with them at home and away, to set up the heartbreak against North Macedonia.