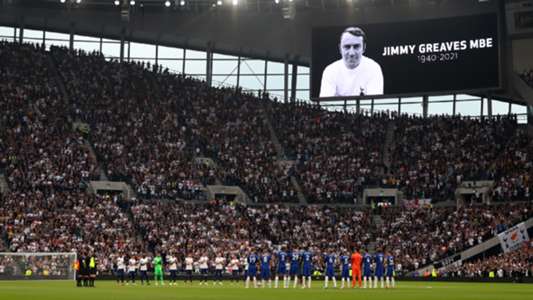 Harry Kane paid tribute to late Tottenham and England hero Jimmy Greaves ahead of his side’s match against Chelsea on Sunday.

It was announced on Sunday morning that Greaves had passed away at the age of 81 .

Spurs and Chelsea paid their respects to the former striker ahead of the Premier League clash in London and Kane called for his side to do him proud with a strong performance.

Kane said: “First and foremost our condolences to Jimmy’s family and close friends. It’s a sad one but hopefully a day we can celebrate. He played for Tottenham and Chelsea and hopefully we put in a great performance in his honour.

“Jimmy was an incredible player and goalscorer and a legend for club and country.

“It’s frightening really how good a player he was. For someone like me to look at his numbers and one day go on to break those numbers would be incredible. I got to meet him back in 2017 and like I say it’s just a celebration of him today.”

Both teams pay tribute to Greaves

Greaves represented both Chelsea and Tottenham. He started his career with the Blues before going on to win the European Cup Winners’ Cup and two FA Cups with Spurs.

The teams paid tribute to him before kick-off with a minute’s applause at the Tottenham Hotspur Stadium.

A statement on Tottenham’s website announced Greaves’ death, saying: “We are extremely saddened to learn of the passing of the great Jimmy Greaves, not just Tottenham Hotspur’s record goalscorer but the finest marksman this country has ever seen. Jimmy passed away at home in the early hours of this morning (Sunday 19 September), aged 81.”

Chelsea also expressed their condolences with a statement that read: “Chelsea Football Club mourns the loss of a truly remarkable player and one of our own. Our thoughts and sympathies are with Jimmy Greaves’s family and friends at this time of their sad loss.

“Those who witnessed Greaves effortlessly breeze through a defence with the ball at his feet, before passing it beyond the goalkeeper and into the back of the net, universally acclaim him as the finest goalscorer to play for Chelsea FC. They normally go further too, and describe the east Londoner as the best finisher English football has ever seen.”