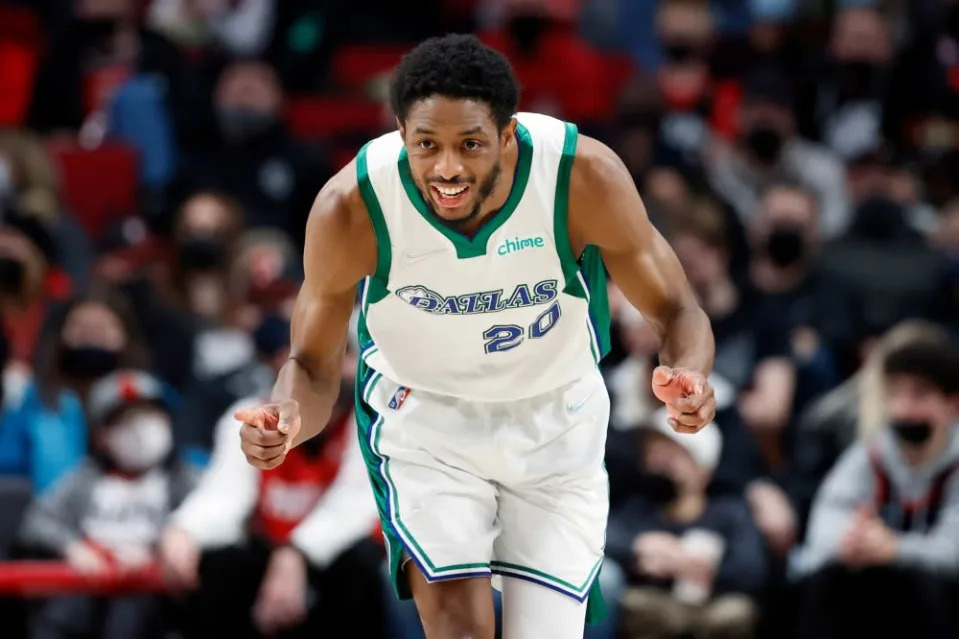 This NBA season has included constant updates about players entering COVID health and safety protocols and led to the return of some beloved veterans getting another shot to play in the league.

While the daily COVID carousel has affected numerous stars and decimated teams, it’s been a silver lining for players who thought their NBA journeys were over.

“I didn’t think this was possible, to be honest with you,” Celtics guard Joe Johnson told HoopsHype. “As you get older, you’re like a dinosaur. Nobody thinks you can play in your 40s.”

Yet, here we are. Johnson’s second stint with the Celtics comes 20 years after his first one, the longest gap for an NBA player in history.

Along with Johnson, HoopsHype spoke with Mavericks guard Brandon Knight and Hawks guard Lance Stephenson about how their 10-day hardship exception deals and NBA returns happened behind the scenes.

Knight watched as numerous players received a call-up to the NBA as he awaited his opportunity to play at the end of the G League Showcase with the Sioux Falls Skyforce. After beating the Stockton Kings, he got back to the room and spoke to his wife, telling her how awesome it would be to get a Christmas gift to get a call-up from an NBA team. Sure enough, Knight tossed and turned during the night anxiously but woke up to 10 missed calls on the West Coast before learning he’d make his NBA comeback.

“The emotions were high to have gone through this journey,” Knight told HoopsHype. “I don’t care how it happened. The fact that I was able to put on an NBA jersey was more humbling than anything. Some tears came out of my eyes.”

Reunited with his former Bucks coach Jason Kidd in Dallas, Knight had 18 points and five assists in 24 minutes during Dallas’ win over the Trail Blazers Monday night.

Johnson was with his eight-year-old daughter when he got a call from his agent, Jason Glushon, around 6:00 at night. Johnson packed his bag and rushed to the airport to catch a 9:20 flight. After waiting years, including a brief stint with the Pistons and a workout for the Bucks, Johnson returned to the NBA, scoring his first basket since 2018, and went viral on NBA Twitter.

Stephenson had a handshake deal with the Indiana Pacers to return to the organization for the third time when the pandemic hit, but the two-year deal ultimately fell through.

Before signing with the Hawks and reuniting with his former Pacers coach, Nate McMillan, the Mavericks expressed interest in Stephenson, a league source told HoopsHype. McMillan kept in contact with Stephenson overseas and the G League and advocated for the signing of Stephenson with Hawks general manager Travis Schlenk, HoopsHype learned.

Each player knows they’re on a 10-day tryout with the looming return of their current teammates lurking in the background.

Knight admitted he took the process for granted after coming into the league as a top high school and college player. Following injuries and his G League stint, Knight is an even more mature person and player.

Stephenson, a high school star at Lincoln in New York and a former second-round pick, was previously in the NBA with the Lakers during the 2018-19 season, then played in China before joining the Grand Rapids in the G League earlier this season.

“It’s a blessing,” Stephenson told HoopsHype. “To be out of the league and have a chance to prove yourself. I called my whole family. It was just like getting drafted again.”

Johnson, a seven-time All-Star, was seen soaking in his return to the NBA before his first game with the Celtics near center court, knowing it could be the last time he suits up.

“I do know and understand that at 40 years of age, these opportunities don’t come like this. I’m taking it one day at a time and enjoying it and having fun being a kid, for real,” Johnson said. “I had a short stint my rookie year in Boston. I think I was only there for five or six months, but it was fun. To come back 20 years later, you couldn’t write anything better than that.”

A month ago, Johnson’s 14-year-old son asked what he was doing when his dad played. Johnson reminded his son he was in the playroom with kids of other players on teams over the years. After beating himself up for that, Johnson’s teenage son got to watch his dad and soaked it all in.

For each player, there’s a tone of humbleness and appreciation in their voices when speaking, following sobering moments of realization that a return to the NBA may not have been possible along their road back.

“When the thought came, I always pushed the thought out and think positive, try to have faith and believe that I could be back,” Knight said. “This is what we’ve worked for our entire lives. I never let that thought live. I know my own journey and how tough it’s been. We all have stories. This is all we know and how we take care of our families. A lot of their stories push me to keep going. Joe has done so much for the game and continues to play in the BIG3, and now he’s back.”

Knight and Stephenson have mostly played consistent minutes since returning, while Johnson has been a veteran mentor.

“There’s no pressure on me,” Johnson explained. “I’ve been around the block, had fun, and a heck of a career. I understand that these young guys need a little help in development. I want to be there to help them out. Guys like Jayson Tatum, Jaylen Brown, Dennis Schroeder and get the Celtics back to where they’re supposed to, whether that’s staying in their ear if I see something or playing.”

While each player jumped at the chance to return to the NBA, they know there is a risk with COVID spreading like wildfire across the league, and they could enter into the health and safety protocols just as quickly as the players they’re replacing.

“We could be in the huddle talking to each other without our masks on, and the person right next to you could have it,” Stephenson told HoopsHype. “You never know. It makes me not want to be too close to my teammates. Whatever it takes. As long as the NBA is going, and everyone is healthy. We get tested probably like three times a day. As long as we keep doing that and maintaining that, I think the NBA will be fixed.”