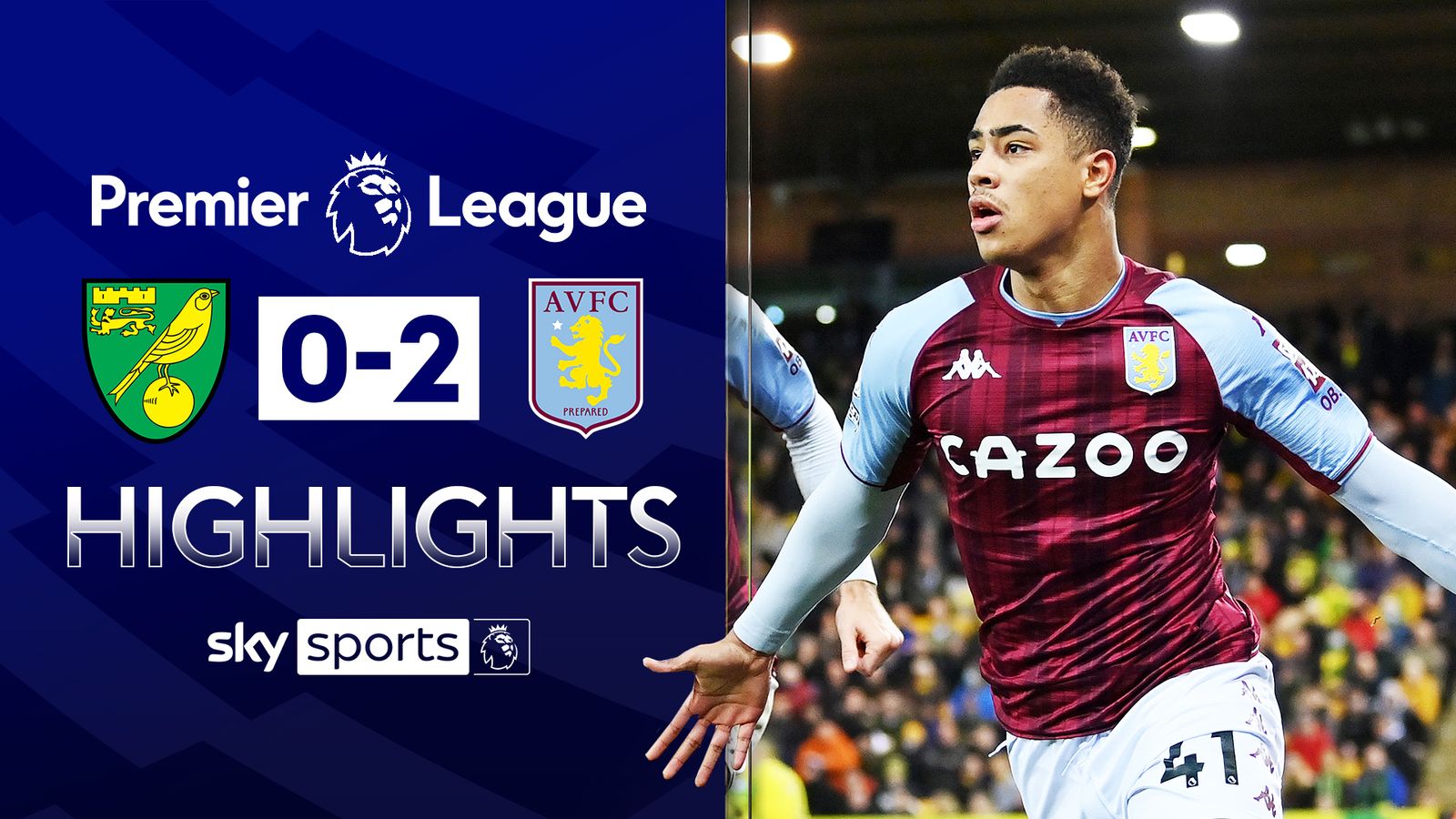 It was an away win inspired by academy graduates as Jacob Ramsey struck a sublime opener (34) before substitute Carney Chukwuemeka provided the pass for Ollie Watkins to put the seal on a deserved win for Steven Gerrard’s men from close range (87).

“I’ve been watching clips of the gaffer and he was one of the best goalscoring midfielders and that’s what I want to be,” a jubilant Ramsey said after his man-of-the-match display.

Norwich rarely threatened with their best chance falling to Kenny McLean shortly after the break but he was unable to capitalise on a short backpass from Ashley Young.

The result means the hosts remain rock bottom on 10 points, three adrift of safety, while a fourth league win in six games under Gerrard moves Villa up to ninth in the table ahead of the remaining midweek fixtures.

Man of the match: Jacob Ramsey.

Norwich were aiming for their first Premier League win on a Tuesday at their 16th attempt, having lost 11 and drawn four of their previous 15 matches on this day of the week.

Despite only keeping one clean sheet in their previous 14 away league games, Villa’s defensive improvement under Gerrard was again evident during the 1-0 defeat against Liverpool at Anfield on Saturday – and the benefits of fielding an unchanged backline showed in a dominant first half.

There is already a defined style to Villa under Gerrard, with the full-backs used to great effect, and while the hosts managed to throw bodies at crosses in the opening half, they were powerless to prevent the visitors from breaking the deadlock following a swift transition.

Watkins, facing the manager who signed him twice, was heavily involved as he took Ramsey’s pass before returning the ball to the midfielder by the halfway line, with Ramsey then embarking on a solo run at the Norwich defence before rifling the ball past Krul.

It was some way to mark his 50th club career appearance, and five minutes later he was threatening a second as he scuffed Matt Targett’s cut-back very nearly into the path of the lurking Watkins only for Brandon Williams to make a crucial late intervention.

There were one or two jeers at half-time from home supporters who acknowledged their side had very little to show for their efforts during the opening 45 minutes.

A routine save from Martinez to gather Ben Gibson’s header from another set-piece perhaps made Villa complacent as they were very nearly punished when a slack backpass from Young was read by McLean only for his first touch let him down when a first-time shot was required.

Smith had bemoaned a lack of quality in the final third since his arrival, calling on his players to make better decisions but Villa would reassert themselves.

Targett collected Matty Cash’s diagonal to cut inside and rifle a right-footed shot wide. Minutes later, McGinn’s deep cross was headed low by Watkins but Krul was alert to smother at his near post with his feet.

There was plenty of pretty football without any punch from Norwich as Adam Idah was introduced and headed straight at Martinez.

Emi Buendia was denied a goal on his return to Norwich as the selfless Watkins set up the Argentinian for a low shot that was blocked by Max Aarons, however Villa would find a second in the closing stages.

Chukwuemeka was the architect as he collected Tyrone Mings’ raking pass to dart into the box and pick out Watkins at the far post for a simple tap-in to complete another impressive display from Gerrard’s upwardly-mobile side.

Norwich boss Dean Smith: “It’s tough as we weren’t very good in the first half. We’ve been missing eight that could’ve been in the first team but I’m not making excuses, we never played with any tempo and were too passive.

“We got what we deserved in the first half. We improved the tempo in the second half but we have to improve the moments in the final third. It’s hard when you’ve eight of your first team not available.

“We’ve a lad in Sam Byram who came in for his first appearance in two years. We’re down to the bare bones and have got some Covid issues too. We’ve had to speak to the Premier League on advice on where to go, not that they’ve done a lot.

“Our consistency needs to be better. We can’t be as good as we were against Manchester United and then be so low in the first half. If this was an impossible job I wouldn’t have taken it. We’ve had some performances here but that was the first time we were below the standard.”

Aston Villa boss Steven Gerrard: “It was a really strong away performance. I thought we controlled large parts of this game – we were difficult to play against and looked really dangerous.

“At 1-0 you always run the risk [of conceding] so it was nice to see Ollie finish it off. The academy deserves a lot of credit. We’ve some top coaches and we need to keep developing it as we want as many local homegrown players that we can have.

“It has been a challenging week, we lost one to injury, a couple to Covid and some members of staff as well.

“It’s been a positive start for me and we’ve started how we wanted to do and had some really tough games against (Manchester) City and Liverpool.”

On Ramsey’s opening goal, Gerrard added: “As a midfielder you can only applaud that kind of play and to then unleash a shot like that, it should be in the running for goal of the month.”

Analysis: Ramsey brings away comfort and joy for Gerrard

Just 38 days after he was let go by Aston Villa, Smith saw the gulf in class between the side he has inherited and his former employers.

Smith is under no illusions of the size of the task he faces, and as he vanished down the tunnel at Carrow Road, he may have afforded himself a wry smile at the small but not insignificant role he played in his own team’s latest demise.

It was entirely fitting that it would be Ramsey – a player he developed at Villa – who had the final say on this heavily one-sided affair in East Anglia as his snapshot was batted down by Krul in the final act.

The 20-year-old has played in 14 of Villa’s 16 Premier League games this season, and after faith was initially instilled in him by his previous manager, Smith’s loss is now Gerrard’s gain.

Villa reinvested the £100m received for Jack Grealish on the likes of Leon Bailey and Buendia, but it is Ramsey who seems to have benefited the most from last summer’s transfer activity.

While they are very different players and this was a poor Norwich performance, the signs are that he is going to benefit tremendously from working under Gerrard, with Smith’s foundations having been put firmly in place.

Man of the match – Jacob Ramsey

Ollie Watkins will feel slightly aggrieved. After all, he scored and assisted in the same Premier League game for only the second time, also doing so in October 2020 against Liverpool. But it was Ramsey who took the game to Norwich and was rewarded following his driving run to turn Villa’s dominance into a first-half lead.

In his 50th senior club appearance in all competitions (43 for Aston Villa, 7 for Doncaster), Ramsey netted just his fifth goal, and his first since netting against Arsenal in October, with all five coming away from home. His four shots were only bettered by Watkins’ six while no Villa player enjoyed a better pass completion rate than his 89 per cent.

Ramsey told BT Sport: “It was a big win, Norwich were a good side, especially in the second half.

“In the first half we were outstanding on and off the ball so it’s a good win. I saw Ollie knock it off, there was no-one there so I thought ‘why not?’

“We’ve got a good academy and our bench was full of them today. We have a feelgood factor now.”