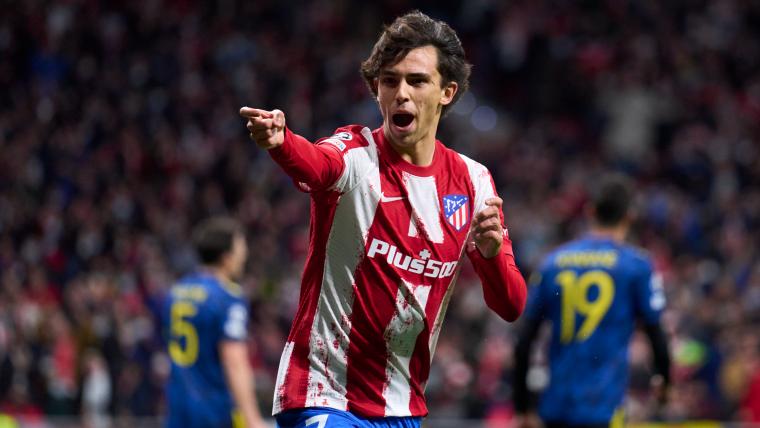 Joao Felix was described by Atletico Madrid CEO Miguel Angel Gil Marin as “the biggest bet this club has taken in its history.” The gamble hasn’t paid off.

Three and a half years after arriving from Benfica in a €126 million deal, the fourth-biggest transfer fee ever paid, Felix reportedly wants out of the Wanda Metropolitano. Atleti, keen to cut their losses, are looking to move him on, possibly as soon as January.

According to reports, Atletico are offering the Portugal international to clubs around Europe on loan, with a €10m fee touted for a six-month deal. It’s an expensive proposition, even for the second-most-expensive signing in La Liga history, but it’s one that Arsenal and Manchester United are considering.

But would Felix, a player unable to show consistent form under Diego Simeone, thrive under Mikel Arteta or Erik ten Hag?

With Atletico apparently eager to grant Felix his wish and move him on, Arsenal and Manchester United would appear the most likely destinations in January. It would likely be a loan until the end of the season, with a fee paid and a significant part of his wages covered.

David Ornstein of The Athletic told NBC Sports that the forward has been offered to “a number of clubs” but that “the numbers are too high” for most to consider a bid yet — including Arsenal.

“Manchester United, Chelsea, many others [have been offered the player],” he said. “Jorge Mendes, his agent, knows he needs to move Joao Felix because he’s out of favour at Atletico Madrid.

“Arsenal are keen to do it, but the numbers would need to come down for that to happen. I think they probably will. It would only be a six-month loan and that’s going to be expensive, but he is a high-quality player.”

Although no clubs appear willing to meet Atleti’s initial demands, it would seem likely that, if he does leave in the January window, the Premier League will be Felix’s destination. Even Aston Villa have been mentioned as suitors, although Arsenal, United and Chelsea would likely be ahead in the queue.

At the moment, Felix is more of an expensive bench-warmer than a first-team star at Atletico Madrid, desperate to play but unable to convince his manager.

Head coach Simeone has insisted he wants to keep the player but admitted that they have had some disagreements about his role: before the 2-0 win over Elche on December 29, Felix had only started one La Liga match since September 3 and played just 74 minutes across their final four Champions League group games this season as Atleti crashed out of the competition.

Felix, for his part, has been growing frustrated at his lack of consistent game time, especially since he was voted the fans’ player of the season for 2021/22. According to AS (via A Bola), the goalless Champions League draw with Club Brugge on October 12, during which the 23-year-old was instructed to warm up three times but never brought on as a substitute, was the final straw.

Although letting a €126m player leave on loan would hardly reflect well on the club’s transfer policy, offloading an unhappy Felix makes sense for Atletico. Ideally, they want his wages covered in full for six months and to receive a loan fee, both of which would help them to meet Financial Fair Play obligations. Should Felix impress in his time away from the club, they could then look to sell in the summer for a better price than they would receive now.

“For reasons it isn’t worth getting into — the relationship between him and the boss, the minutes played, his motivation right now — it makes you think that the reasonable thing is that if there’s an option that’s good for the player, good for the club, we can look at it.

“I’d love him to stay, personally, but I don’t think that’s the player’s idea.”

Arsenal were top of the Premier League on Christmas Day for the first time since 2007, winning 12 of their opening 14 matches this season. A come-from-behind victory over West Ham on Boxing Day means they are guaranteed to be top of the pile at the start of 2023.

In order to maintain their surprising but increasingly impressive title challenge, the Gunners need reinforcements, particularly in attack.

Gabriel Jesus’ knee injury, sustained during the World Cup, is expected to keep the Brazilian out of action for three months, leaving Eddie Nketiah as Arteta’s option as a No.9. Felix would offer additional competition for that position.

Additionally, should Arsenal fail in their efforts to sign top target Mykhailo Mudryk from Shakhtar Donetsk — the Ukrainian side want a transfer fee close to €100 million — then Felix represents a cost-effective alternative. The Portugal international’s versatility means he could play in a wide role, easing the reliance on Bukayo Saka and Gabriel Martinelli, or even as a No.10 should Arteta deploy a 4-2-3-1 system.

United have some rather large shoes to fill in attack, with Cristiano Ronaldo having cancelled his contract at the club in the wake of an explosive interview with Piers Morgan. Felix is an obvious replacement.

While Ronaldo’s status and importance at Old Trafford had diminished (which partly explains the interview), Ten Hag had been eager to sign a new forward and boost United’s goalscoring power even before the five-time Ballon d’Or winner had emptied his locker at Carrington. At present, Anthony Martial is their only senior option as a No.9, and his injury record means he cannot be relied upon to stay fit and firing, so the United boss is desperate for forward additions.

United had looked likely to return with a bid for Cody Gakpo, who was a summer target before the arrival of Antony, but their reluctance to make a concrete offer saw Liverpool swoop in and secure a £37 million deal. While Gakpo was admired at United, they were wary of spending large sums on a player more suited to the wide-left role occupied by Marcus Rashford. A loan deal for Felix is far more palatable for the club given both their significant spending in the summer transfer window and the fact the hated owners, the Glazers, are trying to sell the club in the first quarter of 2023 and would therefore be wary of signing off on any more substantial investment in the squad.

Ten Hag also admires forwards who can operate in different positions, which would explain any interest in Felix. He would also offer the tantalising prospect of a link-up with international teammate Bruno Fernandes.

Former United winger Lee Sharpe, speaking courtesy of NewCasinoUK, said: “I still think they need a striker as Martial is a little bit more injury-prone than you’d like.

“I do like Martial — on his day he can be unplayable and he scores goals, holds the ball up well and does all the right things, but he does get injured and you do need that other option with Ronaldo gone. I’d like to see Rashford up as a No.9, but I think they could do with a goalscoring No.9 that can replace Martial if he’s injured or the game takes a turn and needs something a little bit different.”

Nailing down his best position has been part of Felix’s problem at Atletico Madrid. Whether deployed in a front two, as a No.10 or out wide, he has found it difficult to impress on a consistent basis — although Simeone’s more prosaic brand of football has not exactly suited him, either.

Generally, Felix is best suited to a central attacking role, playing off a more advanced No.9. His best form for Atletico has usually come in that sort of position, including last season, when he went on a run of six goals and three assists in eight La Liga matches from early February to early April.

Against Elche, Felix started alongside Antoine Griezmann and behind Alvaro Morata in a 3-4-2-1 system. He opened the scoring with a point-blank header from Griezmann’s cut-back.

In July 2019, Atletico Madrid paid €126 million for Joao Felix, putting him fourth on the all-time list of most expensive transfers. The deal was structured so that Atleti would pay Benfica €30m up front and the rest in installments for a player who scored 20 goals in 43 games for the Portuguese side in 2018/19.

Felix, who was given the No.7 shirt that had just been vacated by Antoine Griezmann — signed by Barcelona for €120m — put pen to paper on a seven-year contract worth €33,000 per week (according to Fichajes).

In total, Felix has made 122 appearances for Atletico (76 of which have been starts) in all competitions, scoring 32 goals and providing 15 assists. He won the La Liga title in 2020/21.

Twenty-five of his Atleti goals have come in La Liga. While they might not sound particularly impressive for a €126m forward across three and a half seasons, when you consider that Felix has only started 54 league games for Atletico, the numbers look a little more favourable. Indeed, his average of 0.66 league goals and assists per 90 minutes is a rate bettered only by Luis Suarez and Matheus Cunha (0.76) among Atletico players since the start of 2019/20.

Felix won his first senior cap for Portugal in 2019, helping Fernando Santos’ side to win the UEFA Nations League. He has made 28 appearances for his country in total, scoring four times.

At the 2022 World Cup, Felix played four times, scoring in the 3-2 group-stage win over Ghana.