Oleksandr Usyk’s most humiliating loss came at the hands of a Russian middleweight – and it hasn’t been repeated in 15 years.

Anthony Joshua has mentally exhausted himself in preparation for Saturday’s world heavyweight title fight against Usyk, the supremely skilled Ukrainian who has forgotten how to lose.

Or maybe he hasn’t.

A stoppage loss sticks out on Usyk’s amateur stats as rare proof that a boxing magician can be mastered.

“He was kind of the underdog, I was favourite,” recalls Matvey Korobov, a stellar middleweight in Russia’s formidable amateur squad.

Usyk would mesmerise every opponent while claiming Olympic gold at London 2012, but six years earlier, a little-known prospect was chewed up by a ruthless champion.

“I said to my team: ‘This guy is the future Olympic champion’.”

Had Korobov even heard of Usyk?

“We were travelling to different countries for international tournaments, but I never saw him before.”

“Korobov stopped everyone in the championships, more or less.

“He wiped the floor with everyone. He was an unbelievable fighter at the time.”

The ‘Mercy Rule’ means a fighter can be spared by the referee if he is being totally outclassed.

“There was a knockdown, there was a stoppage,” said Korobov whilst remembering the one-sided bout.

“I think I dropped him off his feet. The referee scored a knockdown. I think that was the end of the round – the second, if I’m not wrong.

“The third round was stopped by the points, because I was many points ahead of him.”

Smith had watched Scotland’s Fundo Mhura fight in the same weight class but insists Usyk’s demise would not have seized his attention.

“He [Korobov] used to win a lot on that outclass rule, the outscored rule, where he was 20 points ahead.

“Beating Usyk by 20 points now is an unbelievable result, but at the time, it was certainly no surprise to anyone.

“Everyone probably expected it. He was doing it to everyone.”

Another fight was scheduled between Usyk and Korobov, three months later in Azerbaijan, but the bout never occurred and the Russian received a ‘walkover win.’ Tony Jeffries, Team GB’s Olympic bronze medallist, noticed that Usyk had reappeared in the Ukrainian team, only this time his weight class was over two stone heavier.

“Korobov was 75kgs and then there was the 81kg division, that’s what I was in,” said Jeffries.

“Usyk moved up to 91kgs. We heard the only reason why Usyk wasn’t in the 81kg category for Ukraine was because they had Ismail Sillakh, who was another really talented fighter.

“That’s why we heard Usyk had to move up, because this guy was the favourite from the team.

“I think he got forced to go to the next weight division up, which is ridiculous. But then he went there, and he dominated there.”

Usyk had retained his razor-sharp reflexes, despite the extra pounds of weight, and he inflicted a heartbreaking loss on Danny Price, which denied the Brit a place at the 2008 Beijing Games.

“When he moved to 91[kgs] for the Olympic qualifiers, we were thinking, Danny will be too big for him,” said Smith.

But Jeffries admits a points victory over Price was proof that Usyk was not perturbed by sheer size or power.

“That was like, this guy is legit. He beat Danny, but even fighters who weren’t as high level as Danny, Usyk was just running circles around them.

“Absolutely playing with them, doing what he wanted to do with them.”

Usyk will again dance around a fire this weekend while Joshua attempts to ignite a fight-ending punch. 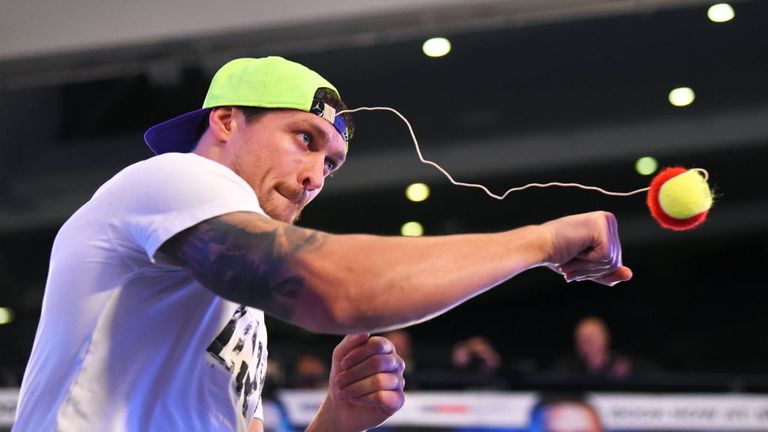 Usyk has shown off his agility and athleticism

But what about Korobov? Did that defeat convince Usyk that he was better suited to chopping down giants?

Regardless, Usyk has never endured another loss like it.

“Of course, he [Joshua] is taller I believe, but Usyk can take this size,” said Korobov.

“With his speed, with his footwork, and he’s southpaw with his combinations, he can beat Joshua with that easily.

“That level, every punch is dangerous if it’s thrown the right way, at the right time, in the right place.”

Usyk has made all the right moves since that loss against Korobov – and perhaps Joshua should be worried.

Watch Joshua v Usk on Saturday, live on Sky Sports Box Office, from 6pm. Book it via your Sky remote or book it online here. Non-Sky TV subscribers can book and watch it here.