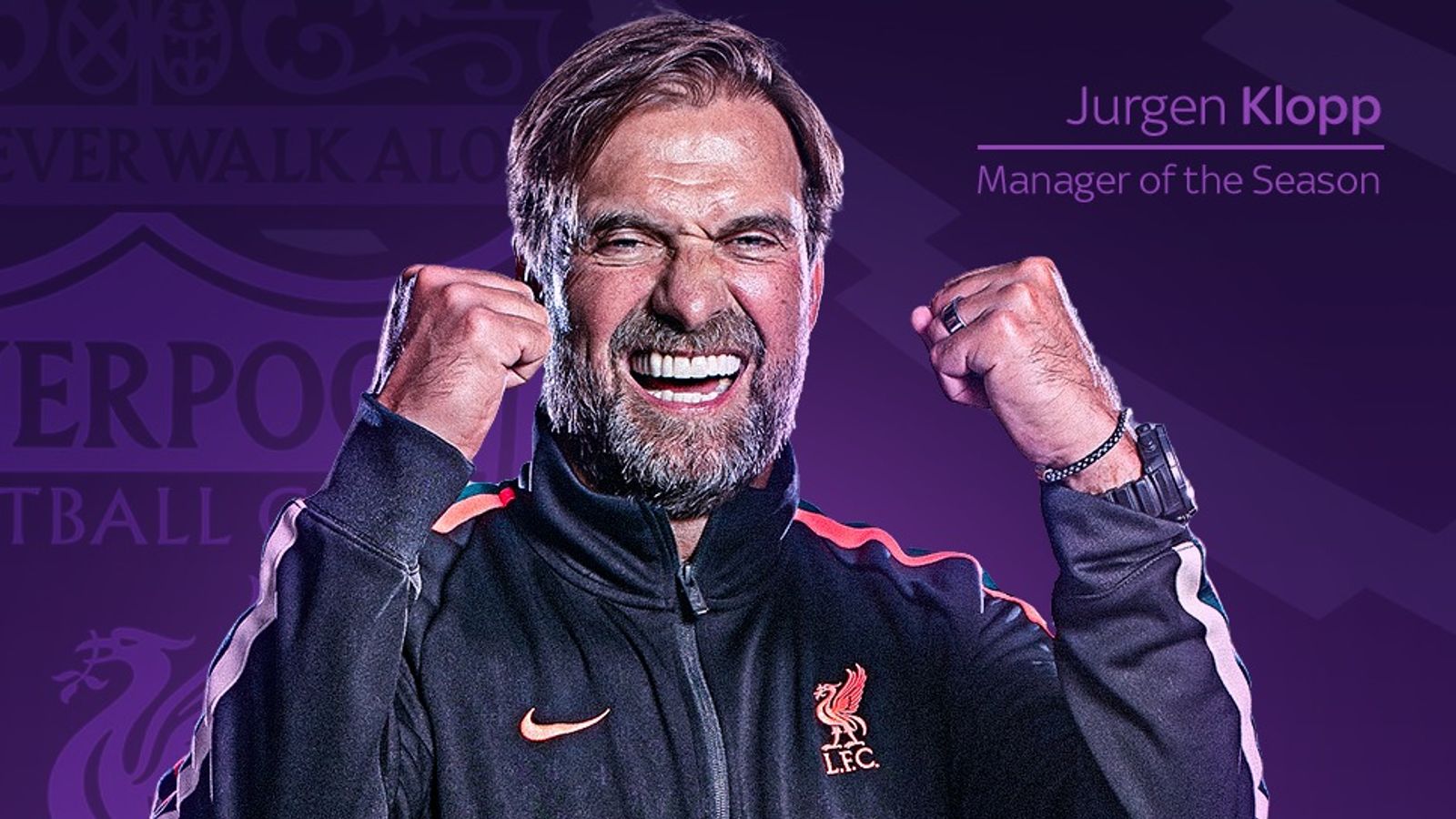 Jurgen Klopp has led Liverpool to FA Cup and Carabao Cup glory this season with the Reds taking the title race to the wire; Liverpool can clinch a cup treble if they beat Real Madrid in Saturday’s Champions League final in Paris; Emma Hayes also recognised at LMA Awards

Liverpool’s Jurgen Klopp has been named Barclays Premier League manager of the season and won the Sir Alex Ferguson trophy for the LMA manager of the year.

Liverpool took the title race down to the wire, racking up 92 points and finishing runners-up to Premier League champions Manchester City by a single point, as they went closer to winning the Quadruple than any other English side in history.

Reflecting on the climax to the Premier League season while accepting his award, Klopp said: “It is a great honour and it was an insane season. The last matchday when only two games were meaningless and, in the rest, we all played for absolutely everything.

“It was a bit nervy, it wasn’t the best outcome for us, but we are already over it. And when you win a prize like this you are either a genius, or you have the best coaching staff in the world – I am here with four of my coaching staff, and they know how much I appreciate them.”

Klopp also collected the Sir Alex Ferguson Trophy, which is voted for by the full membership of managers across all the divisions. As Sir Alex himself announced the winner, he said: “This is agony, it’s absolute agony…Jurgen Klopp.”

The Liverpool manager added: “This being voted for by my colleagues is obviously most important prize you can get.

“I don’t believe in individual prizes in football generally, it is a team sport and I would be nothing without these boys there. It is all about what we can do together and what we did together.”

Klopp’s men can still clinch a cup treble if they beat Real Madrid in Paris on Saturday and add the Champions League to this season’s FA Cup and League Cup successes.

Liverpool Women’s boss Matt Beard made it a double for the Reds as he collected the FA Women’s Championship Manager of the Year after winning the league. Title-winning Chelsea manager Emma Hayes scooped the Barclays FA Women’s Super League manager of the year award.

Meanwhile, QPR duo Chris Ramsey and Manisha Tailor beat off competition from England manager Gareth Southgate and Liverpool boss Klopp to be named joint winners of the Kick It Out and Sky Inclusion Champion Award.

UEFA A Licence coach Tailor is assistant head of academy coaching to Ramsey at QPR. Tailor is the only South Asian woman ever to hold such a role in English football history.

Brighton Women’s manager Hope Powell and Leatherhead FC player and LGBTQ+ role model Luke Tuffs were also in the running for the award, which recognises an individual who has used their position of leadership to combat discrimination and promote inclusion.

Liverpool complete deal for Fulham’s Carvalho
Liverpool have completed the signing of Fabio Carvalho from Fulham after initially missing out on the winger on Deadline Day in January.

Carvalho’s current deal expires this summer and Fulham are entitled to compensation set by a tribunal should the teenager join another English side, while continental clubs would only need to pay a nominal fee.

The 19-year-old moves to Anfield on a five-year contract on July 1.

Carvalho already underwent a medical with Fulham’s permission ahead of a transfer which sees Liverpool pay Fulham £5m plus add-ons.

Liverpool’s move for Carvalho in January fell through after the Premier League side ran out of time to complete the deal on Deadline Day.

Jurgen Klopp’s side were set to sign Carvalho and loan him back to Fulham for the rest of the season, but he remained with the Championship leaders anyway with no deal having been agreed.

Carvalho has scored 11 goals in 38 appearances for Marco Silva’s side this season, finding the net in Fulham’s 4-1 FA Cup defeat to Manchester City in February.

In 2021, Liverpool were ordered to pay Fulham a record compensation fee for a 16-year-old following Harvey Elliott’s transfer to the club in 2019. Once add-on clauses are met, Fulham could receive a fee in the region of £4m and have also inserted a substantial sell-on clause, understood to be 20 per cent.