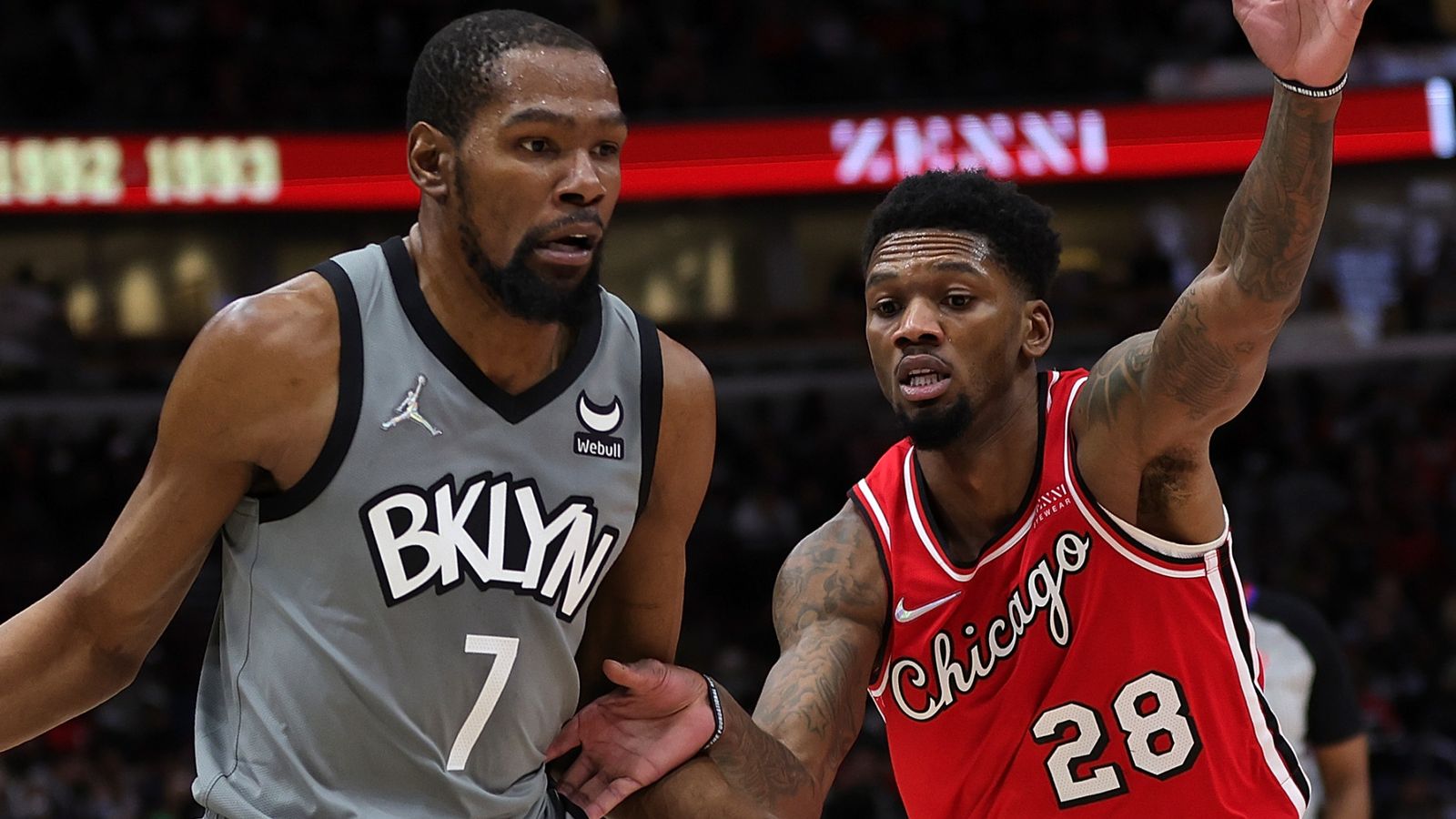 Kevin Durant scored a game-high 27 points and James Harden notched a double-double of 25 points and 16 assists to lift the visiting Brooklyn Nets to a 138-112 rout of the Chicago Bulls on Wednesday in a matchup of the top two teams in the Eastern Conference.

A 22-0 run spanning the third and fourth quarters shifted the advantage to Brooklyn, which avenged a 23-point defeat in Chicago on November 8 and a four-point home loss to the Bulls on December 4. The Nets’ torrid third quarter established the tone in a game they led by as many as 38. Brooklyn shot 12-for-18 and committed just no turnovers in the third while closing the quarter on a 30-8 run after a Nikola Vucevic layup tied the game at 71 at the 8:43 mark. Jaylen Brown led all scorers with 34 points, Jayson Tatum added 33 and the Boston Celtics completed a home-and-home sweep of the Indiana Pacers with a 119-100 win on Wednesday night in Indianapolis.

Dennis Schroder contributed 23 points for Boston, which earned their third straight win after shooting an impressive 51.3 per cent (40-of-78). It marks the Celtics’ first three-game win streak since mid November, while the Celtics improved to 6-0 all-time when both Tatum and Brown score at least 30 points.

Myles Turner had 18 points to lead the Pacers. Domantas Sabonis added 17 points, Caris LeVert had 16 and Justin Holiday 13 for Indiana, which took a second straight loss and has dropped eight of nine overall. Miles Bridges contributed 21 points, LaMelo Ball added 13 and Cody Martin had 11 for the Hornets, who won their fourth in a row despite using only eight players. The Hornets also snapped a 16-game losing streak in the series against the Sixers.

Joel Embiid scored 31 points, marking his eighth straight game with at least 30, and Tobias Harris added 17 for the Sixers. Furkan Korkmaz contributed 14 off the bench while Tyrese Maxey and Seth Curry had 10 each for the Sixers, who had their seven-game winning streak broken. Kyle Kuzma posted his fifth double-double of the month and Kentavious Caldwell-Pope had 12 points and 10 rebounds, leading the host Washington Wizards to a 112-106 victory over the Orlando Magic on Wednesday.

The Magic took their 10th consecutive loss while the Wizards won their third game in a row. Kuzma continued his strong play in January — and narrowly missed his first career triple-double — finishing with 19 points, 10 rebounds and nine assists. The fifth-year veteran has now scored 20-plus points in nine straight games.

Orlando has lost at least 10 consecutive regular-season games for the ninth time in franchise history, with the Magic most recently having a double-digit skid in the 2014-15 season.

Spencer Dinwiddie contributed 17 points for Washington. Harrell finished with 16 points and eight rebounds, Raul Neto scored 15 points and Corey Kispert put up 11 points, going 3-for-5 from beyond the 3-point arc. Tyler Herro came off the bench to score 21 points and help the visiting Miami Heat to a 115-91 win over the Atlanta Hawks on Wednesday.

The Heat broke the game open by scoring the first 16 points of the third quarter and led by 19 going into the final quarter. Herro shot 9-for-19, matched his career high with 11 assists and came within one rebound of a triple-double. RJ Barrett scored a game-high 32 points Wednesday night for the host New York Knicks, who moved back to the .500 mark with a 108-85 win over the Dallas Mavericks.

Julius Randle (17 points, 12 rebounds) and Mitchell Robinson (19 points, 10 rebounds) each had double-doubles for the Knicks, who have won four of five to improve to 21-21 — the first time they have been at .500 since being 12-12 on December 7. Evan Fournier scored 13 points and Alec Burks added 10 points.

Luka Doncic had 21 points and 11 rebounds for the Mavericks, whose six-game winning streak was snapped. Dallas, whose average margin of victory during the streak was 15.7 points, was trying to win seven in a row for the first time since the 2010-11 season. 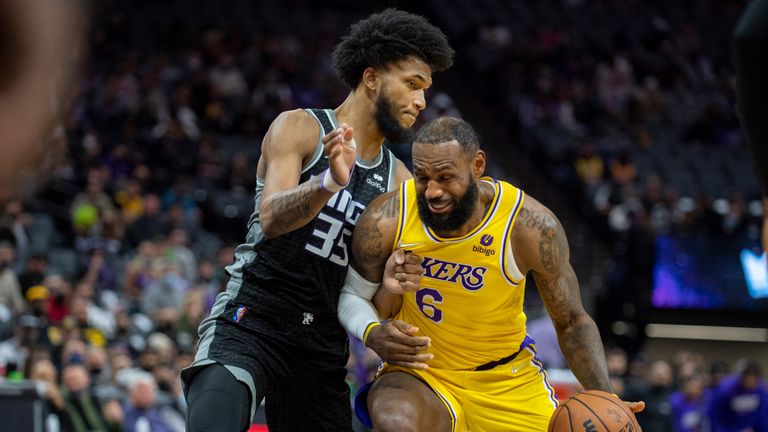 Sacramento used a 24-3, third-quarter flurry to take the lead and De’Aaron Fox capped a 29-point performance with a key jumper to stall a late Los Angeles Lakers rally as the Kings earned a 125-116 home victory on Wednesday night.

The Kings ended a five-game losing streak and finished with a 2-2 record in the season series against the Lakers. LeBron James produced a game-high 34 points for the Lakers, who dropped their second straight after winning four in a row.

The Lakers led for most of the first half, including by as many as 14, and were up 76-68 in the third minute of the third period before the Kings flipped the tables. Harrison Barnes buried a pair of three-pointers and Fox had a three-point play among seven points in the 24-3 run that turned the eight-point deficit into a 92-79 lead.

James had two hoops in an 8-0 spurt that got the Lakers within 118-116 with 1:36 to go. That’s when Fox countered with his momentum-stopping 12-footer. Chimezie Metu then nailed a three-pointer for the Kings after Russell Westbrook had missed a long-distance attempt for the Lakers, giving Sacramento breathing room. Eric Gordon scored 31 points and Kevin Porter Jr. contributed 12 of his 18 points in the final four-plus minutes as the visiting Houston Rockets defeated the San Antonio Spurs 128-124 on Wednesday to snap a three-game losing streak.

The Rockets led by just four with 5:01 to play before Porter scored eight of his points during a 10-3 run over the ensuing two minutes to produce a 118-107 advantage. Porter later hit a three-pointer with 58.4 seconds left to extend the lead back to nine, and the Rockets held on down the stretch. Lamar Stevens scored a career-high 23 points and Lauri Markkanen had 20 as the Cleveland Cavaliers handed the Utah Jazz their fourth-straight loss with a surprising 111-91 blowout victory Wednesday night in Salt Lake City.

Stevens, who came into the game averaging 4.5 points, hit 10 of 15 shots overall. He scored 15 during the decisive third quarter when Cleveland surged way ahead of the struggling Jazz with a 21-0 run.

Cleveland improved to 3-1 on its six-game road trip after shooting 53.1 per cent overall, outrebounding the Jazz 50-32 and winning the assists battle 28-11.

Jordan Clarkson scored 22 points off the bench for the Jazz, who were missing eight players, including leading big men Rudy Gobert and Hassan Whiteside. Six players and multiple coaches are in the league’s health and safety protocol.