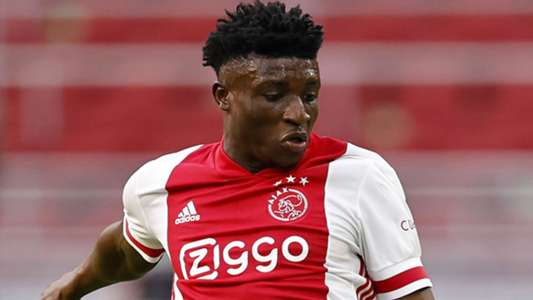 Ghana midfielder Mohammed Kudus watched from the bench as Cote d’Ivoire striker Sebastien Haller netted to inspire Ajax to a 9-0 thrashing of Cambuur in the Eredivisie on Saturday.

The Ivorian made it five goals in four days in the matchweek five fixture, having registered a remarkable four goals against Portuguese side Sporting CP in the Champions League in midweek.

The win took the Lancers to the top of the league table, one point ahead of second-placed PSV Eindhoven, who take on Feyenoord in their matchday five tie on Sunday.

Kudus featured in the Ajax’s matchday squad for the first time this season, having returned from an injury sustained while in pre-season action against Belgian fold Anderlecht.

On Friday, he featured in his first competitive game this season, featuring for the entire first half and scoring a goal as Ajax’s youth side beat Almere City 4-2 in the second tier.

A day later on Saturday, he was drafted into Erik ten Hag’s matchday set-up for the encounter with Cambuur, but would end up watching the entire game from the bench as his side displayed a ruthless attitude.

Morocco right-back Noussair Mazraoui added his name to the score sheet on 29 minutes, nine minutes before captain Dusan Tadic registered his second assist of the night by setting up Brazil winger David Neres to make it 4-0.

After the interval, Tadic turned from provider to finisher, slotting home on the hour mark, before substitute Mohammed Daramy registered a debut goal to make it 6-0.

Ajax were not done just yet as Lisandro Martinez assisted Haller to put the ball at the back of the net in the 67th minute.

Danilo then made put 8-0, before Neres registered a goal of his own six minutes to full-time to complete the riot.

Mazraoui was substituted at half-time while Haller was hauled off in the 72nd minute.

Kudus will hope to make his first season Eredivisie appearance on Tuesday when Ajax take on Fortuna Sittard.