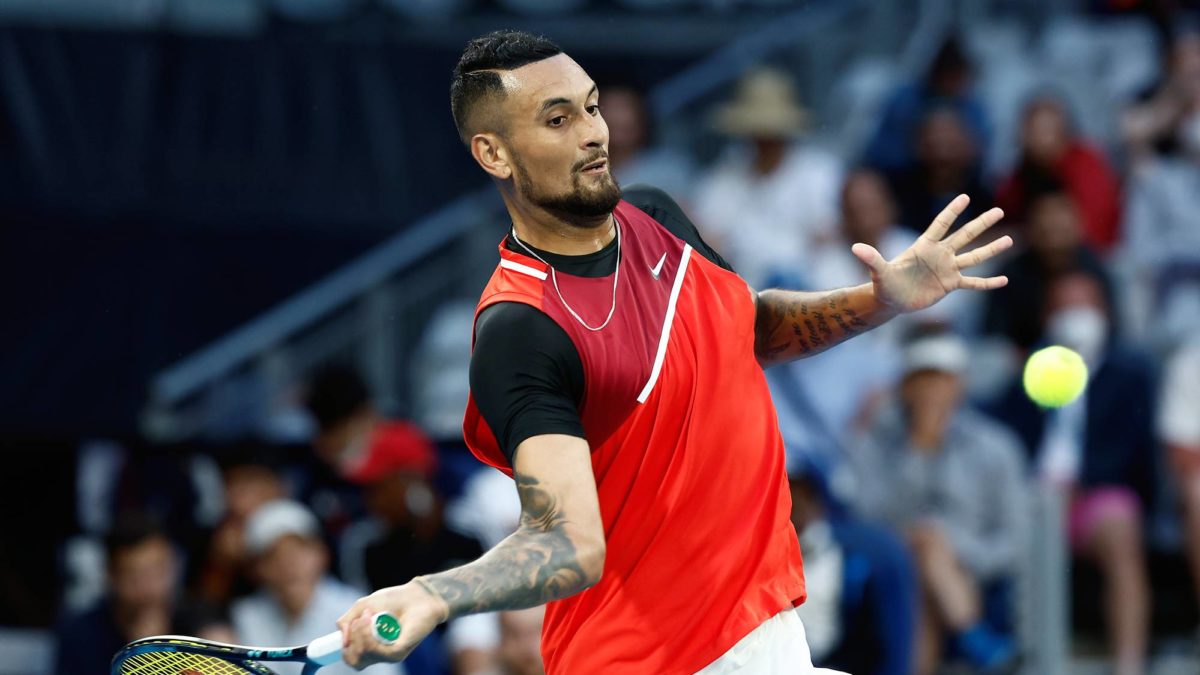 In the space of a couple of hours on Tuesday night, Nick Kyrgios showed why he will always have box office appeal but also why he will probably never win a grand slam.

His next assignment is much greater – he will meet Russian No.2 seed Daniil Medvedev on Thursday in the second round after the US Open champion blitzed Swiss veteran Henri Laaksonen 6-1 6-4 7-6.

Curiously, Kyrgios has won his only two encounters with the highest-ranked player in the tournament after Novak Djokovic’s controversial deportation.

For those playing Kyrgios bingo at home on Tuesday night, you would have filled your card relatively quickly.

There was the jaw-dropping athleticism. The booming serves. Plenty of scorching ground strokes the envy of most players in the top 20.

Nine commentator Jim Courier said he had flashbacks to all-time great Pete Sampras watching some of Kyrgios’ skills on display.

The underarm serve check was marked off early. Kyrgios pulled out the “underhanded” measure early in the first set, tossing the ball between his legs as he sliced the shock tactic, eliciting the desired effect from his opponent, who sent the return sailing over the baseline.

Kyrgios follows up a 220km/h ACE with a cheeky underhand serve! It’s only the second game!!#AusOpen – Live on Channel 9 and 9Now pic.twitter.com/EXX2JGoi5N

Kyrgios also had his usual crowd interaction going from the get-go, revving himself up as he screamed at his entourage, who lapped up his theatrics.

Playing to the crowd is one of the reasons why Kyrgios has such popular appeal but also why you get the feeling he will never translate his enormous potential into a major trophy.

Getting cheers was never a motivating factor, it was simply a welcome byproduct of their brilliance. The truly great players command attention, they don’t seek it.

There was some typical banter with the chair umpire but thankfully no blow-ups so if you had “tantrum” on your bingo card, you won’t be getting the meat tray.

Kyrgios has HAD it with the constant crowd noise!! ????????#AusOpen – Live on Channel 9 and 9Now pic.twitter.com/grW22dHTmJ

And there was also the standard array of careless shots, unforced errors and “what was he thinking” moments when Kyrgios had his rival at his mercy only to gift the point across the other side of the net.

The between the legs shot became a trademark of Federer’s when he needed to unleash it as he had no alternative. Kyrgios was doing it because he seemed bored. It worked in one memorable rally early in the second set as it led to a superb running forehand. He then produced a scintillating return from the next point.

… And then he fluffed a return off a second serve which didn’t make the net. And lost the next point with another unforced error. The full Kyrgios experience in the space of a couple of minutes.

Mark Philippoussis, another prodigiously talented Australian prodigy who never fulfilled his grand slam pedigree, offers seemingly annual advice to Kyrgios to get serious about his tennis or it will soon be too late.

Philippoussis at least went close to winning a major, denied by Federer in a famous 2003 Wimbledon final and by more committed countryman Pat Rafter five years earlier in the US Open decider.

Not all players, even the elite ones, can make this claim but the result in the vast majority of Kyrgios matches is determined by the amount of effort he puts in.

Some players can give it their all and still come up short. When everything clicks for Kyrgios, he can beat pretty much anyone. But it’s when he’s off his game, that’s when the trouble starts.

His ranking has plummeted to 115, more than a hundred slots lower than his career-high of 13 five years ago, and heading into his John Cain Arena clash with Broady, his preparations had been thrown askew due to a bout of COVID-19.

The 25-year-old Canberran showed no after-effects of the illness early in the match, landing a high percentage of first serves and breaking Broady at his first attempt on the way to winning the first set 6-4 inside 34 minutes.

Playing against a 28-year-old world No.128 who has never been able to crack the top 100 should be a walk in the park for someone of Kyrgios’ talent – after breaking Broady again early in the second set, he had a couple of opportunities to double that advantage but couldn’t convert them.

His service game was supreme, though, and he never looked like surrendering his buffer as he marched to another 6-4 frame in the identical amount of time to lead by two sets.

Kyrgios, who only played eight ATP Tour events last year due to the COVID-19 pandemic, has been putting in the hours in the gymnasium to be fit for 2022 and he showed no signs of slowing down in the third set as he again snared an early break to go 2-1 up.

Despite a few deep brain fades to match his hairstyle in the final stretch, Kyrgios closed out the third set by the same margin as the first two, much to the delight of his many animated admirers who lapped up his antics.

Although not everyone was impressed – a large section of the crowd engaged in a running battle with Kyrgios, jeering him throughout the match and also raining down with boos during his post-match on-court interview with Courier.

“When I tested positive it wasn’t great news a week out from the Australian Open. I had some doubts,” he said.

“The last week has been tough. I did isolation, my girlfriend was there and I was lucky enough to get on the tennis court and hit some serves. Obviously I served f—ing well today,” he added with an F-bomb for effect.

More boos came his way, prompting him to say: “I don’t know what I’ve done to this crowd because you guys are a zoo now. You guys are out of control.”

Whether he was being booed or it was an homage to a Cristiano Ronaldo goal celebration was a hot debate on social media after the match but Kyrgios clearly thought he was being taunted by the crowd.

Perhaps the penny dropped well after the match was over because Kyrgios then unveiled his own “Siuuu” celebration for the soccer/tennis fans.

“We’ve all had a tough couple of years so just to be back here at the Aus Open again, I’m just happy to be in front of you guys.”

And therein lies the problem in that last sentence – it was just a throwaway line but Australian tennis fans don’t want him just happy to be in front of them again, they want him to not happy until he lives up to his potential.

But they’ve been waiting close to a decade now since he turned professional in 2013 and even though he’s still only in his mid 20s you get the feeling that time will soon be running out.

For all those wondering why Kyrgios was getting “booed” tonight:

He wasn’t. It’s a UK tiktok trend that formed from Ronaldo’s goal celebration that has ended up in australia with any group of teenage boys in public now. pic.twitter.com/A88lO83I3q https://t.co/2Fuzt5OdQ4