Brooklyn Nets star Kyrie Irving was unable to attend the NBA’s media day in person on Monday due to health and safety protocols, but logged on via Zoom to repeatedly ask for privacy concerning his vaccination status.

While former Late Show host David Letterman was there in person to quiz Kevin Durant, Irving only appeared via a screen set up in the media room of the Barclays Center. This is due to New York’s mandate requiring all athletes who play or practice in the city to have been vaccinated from COVID-19.

TV presenter David Letterman crashed Kevin Durant’s media day news conference, asking the Brooklyn Nets star how many per cent he’ll give this season and why people call him ‘KD’

Despite being pressed by the journalists present, the All-Star guard refused to confirm whether he had received the vaccination or whether or not he did intend to get one ahead of the season. As it stands, he would be forced to sit out all of Brooklyn’s home games.

“There’s just a lot of questions about what’s going on in the world of Kyrie and I think I’d love to just keep that private and handle it the right way with my team and go forward together with a plan,” Irving said.

“So obviously I’m not able to be present there today, but that doesn’t mean that I’m putting any limits on the future of me being able to join the team.”

Irving would be able to attend the Nets training camp in San Diego.

“Please, everything will be released at a due date and once we get this cleared up,” he added. “As of right now, please just respect my privacy regarding anything – home games, what’s happening with vaccination.” 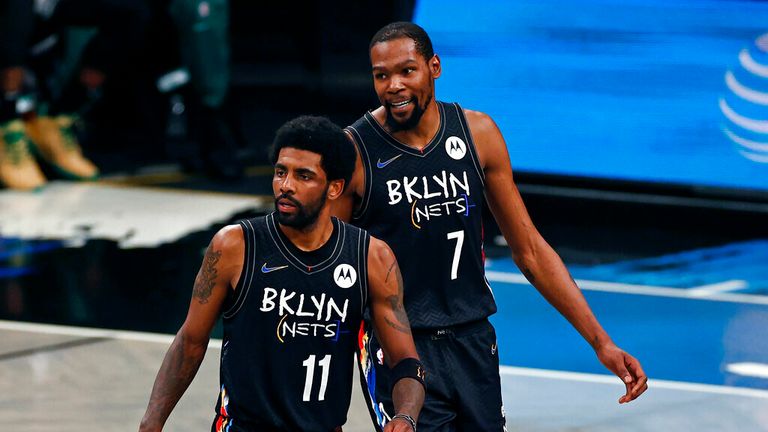 Following his questions from Letterman, Kevin Durant was then asked about his team-mate, who he assured reporters he trusts and will be available for the season.

“It’s on Kyrie and that’s his personal decision,” Durant said. “What he does is not on us to speculate what may happen, but we trust in Kyrie. I expect us to have our whole team at some point.”

On the opposite coast at the Golden State Warriors media day, attentions turned to Andrew Wiggins, who stated in March he did not want to receive the COVID-19 vaccine and had a request for religious exemption from the jab denied by the NBA on Friday.

In his first official comments, the swingman defended his stance on the vaccine and said that he would “keep fighting” for what he believes.

Like Irving, Wiggins stressed the need for privacy on the matter – even as it could leave his team short for home games and risk a significant portion of his $31.6m salary. 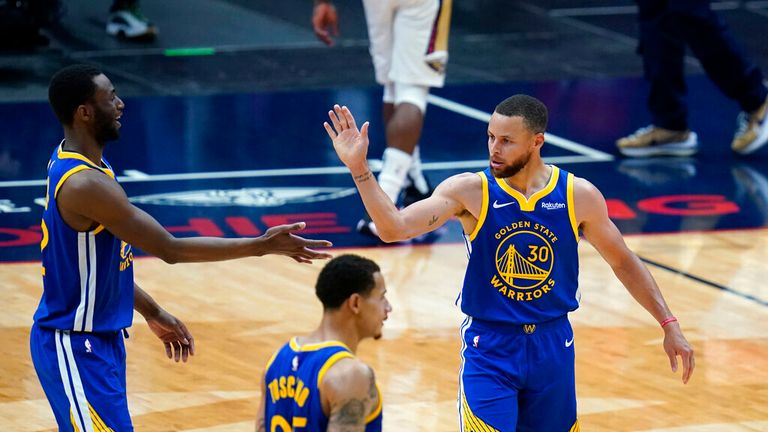 Golden State Warriors star Steph Curry revealed that the team has offered support to Andrew Wiggins, but hopes he will change his mind and be vaccinated against COVID-19

When asked how his organisation could make season plans with the potential for a key starter to miss half of his team’s games, general manager Bob Myers deflected in a similar fashion to Durant.

“We’re optimistic that we’ll have our full complement of players,” said Myers. “We’ll just leave that at that.”

His star team-mate Steph Curry remained supportive, while hoping that Wiggins would be available to play at Chase Center.

“At the end of the day, it is up to him. It’s no secret to that point. We obviously hope that he has all the right information, the access to the right resources to ask all the questions he has on making that decision,” Curry said.

“We hope he’s available. We hope he moves in the right direction.”

Back in March, Wiggins admitted that he would eventually get the shot if he were “forced to somehow.”