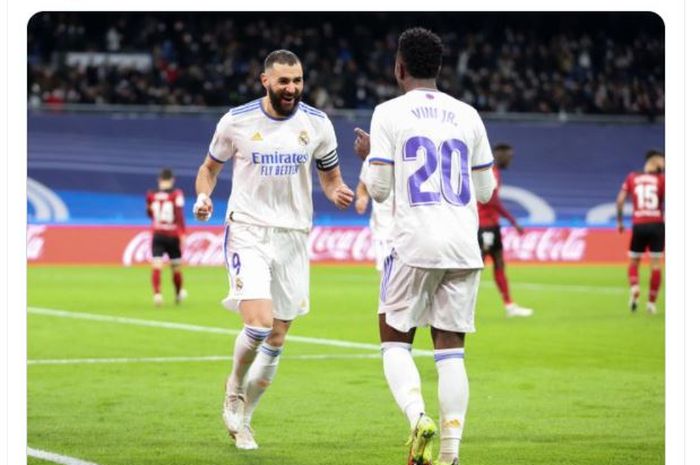 Barcelona is slowly finding its way again, but Real Madrid still has more quality. That was the verdict of the first El Clasico of the calendar year in a Supercopa semifinal which saw Real Madrid emerge 3-2 winners in extra time.

The decisive goal was scored in extra time by substitute Federico Valverde, who finished a deadly breakaway and put Madrid up to stay. Forwards Karim Benzema and Vinicius Junior gave Real Madrid two separate leads during regulation with quality strikes, only for Barcelona to fight back through a lucky Luuk de Jong deflection and an Ansu Fati header with seven minutes left.

Real Madrid continues to march on in a dominant season so far under manager Carlo Ancelotti. It has a five-point lead in La Liga — 17 points ahead of Barcelona — and the Merengues are also in the UEFA Champions League Round of 16 and the Copa del Rey Round of 16. They’ll hope to come away with the first piece of silverware of the season in the Supercopa final on Sunday.

Barcelona will leave Saudi Arabia content with its display as it continues to make progress under Xavi Hernandez. The team showed character to bounce back and it gained confidence as the minutes went on. Ousmane Dembele and Luuk de Jong made solid contributions in attack, and Ansu Fati had another moment of magic.

Ferran Torres made his debut for Barcelona as a starter in the match, but he had a quiet first half playing on the right wing of a three-man front. Two important players made their return for the Blaugrana: Rising star Pedri played his first match since September, and Ansu Fati was back for his first action since Nov. 6.

“For the first 20 minutes we still showed a complex from recent times, but we got rid of those complexes and we competed,” said Barcelona manager Xavi Hernandez. “We’re not so far from what the La Liga standings reflect.

“We had it. We had it. It was a game that was a coin flip and it turned out one way, but it could’ve turned out another. We’re proud. We competed and we have to continue on this path.

“Although the result is a bad one, and we’re going home, we’re leaving proud. We had the game. I’m leaving sad and angry because we could have won the game. But we competed well and could have advanced to the final. It’s a pity.”

Gerard Pique struck a similar tone to his head coach in his postgame interview: “I think as far as the level of play, we were good. We took risks. We went after the game, we took on a lot of risks. In the end they won the semifinal on a counter on which we could’ve gotten back [to defend]. They came with numbers in the box and scored the third. But I’m very, very proud of the team. Playing like this, we [Barcelona] can begin to win and compete for titles.”

Real Madrid goal-scoring hero Valverde was impressed by what he saw from the opponents: “They’re still Barcelona even if the results haven’t been there. They’re a good team with good players and they showed they have a desire to win … In my opinion, I think we have to convert more of the chances that we get. We could’ve finished off the game earlier. That’s part of the game, and things we can improve on.”

Karim Benzema was named Most Valued Player in the Clásico semi-final of the Spanish Super Cup. The French striker, who played the full 120 minutes against Barcelona, set up Vini Jr. for his side’s first goal and scored the second to make to 2-1 to Madrid at the King Fahd Stadium: “I’m thrilled and feel very proud. The fans were great. They give me more confidence and the strength to do what I do on the pitch and I’d like to thank all the fans here for that”.

“My shoulder is ok, it’s just a knock. It was a very tough game. In my opinion we deserved to win, Clásicos are always very difficult to come out on top, Barcelona play good football and if you give them the ball they’re not going to give it you back. I think we deserved the win today because we were on the pitch fighting from the first minute to the last”.

Fatigue going into the final

“It’s normal to be tired after a game. You always give everything you’ve got in a Clásico and we’re aware that if you give them the ball just a bit, they can cause you problems and that’s not a good thing. You end up running left and right, but in the end it’s a good fatigue because we won and we’re in the final”. Benzema received a portrait painted by the artist Mr Dripping following the press conference as MVP.

The Blaugrana fought back twice to push their rivals all the way to extra time in the Supercopa de España semi-finals, before Federico Valverde eventually bagged a winner on the counterattack.

Both Vinicius Junior and Karim Benzema had given Real the lead in regulation time, but responses from Luuk de Jong and Ansu Fati ensured that we enjoyed a five-goal thriller in Saudi Arabia.

However, despite there being so many world-class stars on display at King Fahd International Stadium, we’d still put good money down that some fans were thinking back to older times.

What we mean to say is that El Clasico has undoubtedly lost 5-10% of its glitz and glamour due to the departures of Cristiano Ronaldo and Lionel Messi over the last few years.

That’s not to say that the game means any less to Barca and Real fans, far from it, but there’s no denying that the absence of the Ballon d’Or winners has taken away from its star-studded status.

However, it says everything about Ronaldo’s influence on the legendary fixture, in particular, that his presence was still felt in the clash despite not having played with Real for almost four years now.

That’s because footage has emerged from extra-time in Saudi Arabia where Ronaldo’s famous ‘Siu’ celebration was doing the rounds after Valverde had notched his winning goal for Real.

Around the 102-minute mark, one Ronaldo-loving supporter could be seen leaping in the air and turning to land in a powerful position just as the Portuguese icon does when he finds the net.

As confirmed by both ESPN and BT Sport, the fans’ stairwell antics were matched by a remarkably loud declaration of ‘Siu’ despite the fact that little to nothing was actually happening on the pitch.

You know Ronaldo’s influence is unmatched when he’s got stadiums partaking in his celebration when he’s not even playing and the only thing going on is Thibaut Courtois taking a goal-kick.

So, be sure to ‘Siu’ the celebrations for yourself by checking out the amusing stunt below:

Ronaldo’s ‘Siu’ celebration might be feeling more and more like a meme by the week, but this has to be one of the most remarkable instances that we’ve come across.

You know you’ve made a huge impact on one of sport’s greatest ever teams when the sound of your celebration is still reverberating around games you’re not playing in years down the line.

Well, either that or Saudi Arabian crowds are just particularly enamoured with the whole routine because Ronaldo really got a Jeddah crowd going in the 2019 Italian Super Cup to boot.

On that occasion, Ronaldo and the fans were in tandem with spine-tingling coordination, and no doubt the Manchester United star will have been chuffed to see them running it back again in 2022.

Florentino Pérez, Barcelona president Joan Laporta and Royal Spanish Football Federation president Luis Rubiales swapped gifts the half-time break in El Clásico. The Real Madrid president gave a commemorative jersey to the two officials as part of an event which took place in the VIP box of the King Fahd Stadium in Riyadh.

The 248th clash between these two great rivals was played in Riyadh — the first to be played outside of Spain — with the Royal Spanish Football Federation (RFEF) having agreed a multi-year deal for the semifinals and final of the Supercup to be played in Saudi Arabia.

The 2019-20 edition was the first to be hosted by Saudi Arabia and the RFEF has now agreed a contract with the Saudis for the mini tournament to be held in the Middle Eastern country until 2029, reportedly worth €30 million ($34 million) per season.

Yet as Saudi Arabia emerges as a powerful stakeholder in global sport, the country’s human rights record has come under focus, with activists accusing the kingdom of “sportswashing” — a phenomenon whereby corrupt or autocratic regimes invest in sports events to whitewash their international reputation.

The staging of the Supercup tournament in Saudi Arabia has also faced criticism in Spain.

Before leaving for the tournament on Tuesday, Athletic Bilbao midfielder Raul Garcia — whose side faces Atletico Madrid in the other semifinal on Thursday — called the decision to host tournament p in Saudi Arabia “a complete nonsense.”

“Maybe I’m old school, but football has changed and the fans have been forgotten. I don’t think I need to say that, anyone can see,” Garcia said, as reported by Reuters.

Despite the protestations, the tournament is set to be held abroad for another eight years at least and on Wednesday Real Madrid became the first team to book its place in Sunday’s final.

The match against Barcelona, played in Riyadh’s King Fahd Stadium, was action-packed and exactly what Saudi organizers would have been hoping for in the tournament opener.

Karim Benzema scored with just under 20 minutes remaining and Real looked to be heading for victory, but teenager Ansu Fati’s goal seven minutes from time ensured the game went to extra time.

However, Real did once again get itself into the lead through Valverde eight minutes into extra time and Barcelona was unable to find an equalizer for a third time, meaning Los Blancos will now play either Atletico Madrid or Athletic Bilbao in Sunday’s final, hosted at the King Abdullah Sport City Stadium.