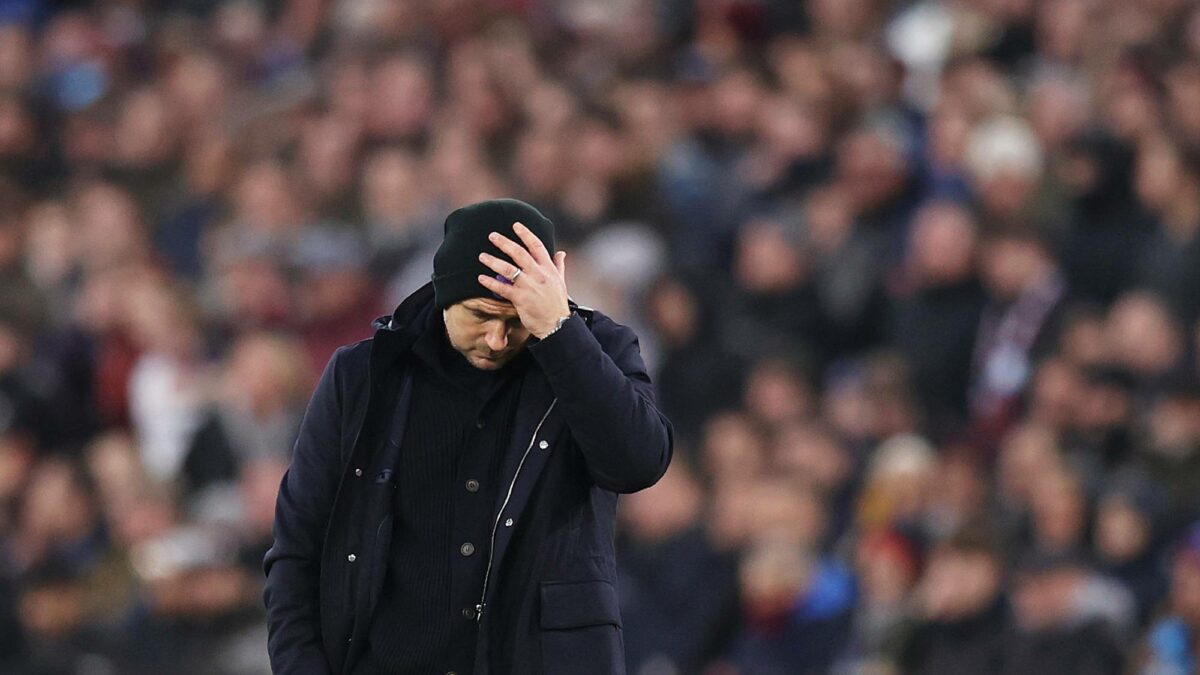 Frank Lampard’s tenure as Everton manager is hanging by a thread after yet another loss, this time a meek 2-0 defeat to fellow strugglers West Ham United.

The Hammers also seemed likely to bin their boss, David Moyes, had he lost the relegation battle at the London Olympic Stadium, but instead, the heat is very much on for Lampard.

Moyes’ victory will be sweet relief after his side took just one point from the last 21 available, while Lampard has now lost six of the last seven.

Everton owner Farhad Moshiri was in attendance in London – he had been told to stay away from last week’s loss in Liverpool – and was asked if he would pull the trigger on the coach, but answered “It’s not my decision”.

Jarrod Bowen scored both goals in a seven-minute first half spell, first netting from close range on the end of Emerson Palmieri’s cross, before being set up for his second by good work by Michail Antonio.

Everton offered little in attack. They have collected just 15 points from their 20 league this season – their fewest points won after 20 games of any league campaign in their history.

Only Southampton are below Everton – on goal difference alone – after the bottom side lost 1-0 at home to Aston Villa, while West Ham’s win meant Bournemouth replaced them in the bottom three despite earning a point in their 1-1 draw at Nottingham Forest.

Elsewhere, Liverpool and Chelsea’s chances of a top-four finish have suffered a blow as the pair played out a disappointing 0-0 draw at Anfield.

On Juergen Klopp’s 1000th game in management, Liverpool seemed shorn of confidence as they looked to avoid three straight league defeats, only creating half chances with Cody Gakpo missing the best of them in the opening period at Anfield.

The visitors introduced big-money January signing Mykhailo Mudryk in the second half but, while he looked lively, the Ukrainian was unable to lift the Blues, who earned a single point that leaves them 10th, level on 29 points with Liverpool in eighth and Brentford ninth.

All three sides are nine points off the top four, with Chelsea having played 20 games to Liverpool and Brentford’s 19 apiece.

“We have to be ready for little steps and this is a little step,” Klopp said. “A clean sheet against Chelsea, we didn’t create a lot of chances and they had some as well.

“We defended in the second half with passion and clear organisation, but we were too deep in these moments. In the end, I’m OK with 0-0 because you have to accept these steps.”

Newcastle United stretched their unbeaten Premier League run to a club-record 15 matches and crept up into third place despite being held to a 0-0 draw at Crystal Palace. The Magpies kept a sixth successive Premier League clean sheet but were left frustrated at Palace.

They have 39 points and are third on goal difference ahead of Manchester United, who play leaders Arsenal on Sunday. Second-placed Manchester City, who host Wolverhampton Wanderers on Sunday, have 42 points with Arsenal on 47.

Southampton suffered a blow in their bid to avoid relegation as they lost to Villa. Ollie Watkins struck Villa’s winner in the 77th minute off a free kick by Douglas Luiz shortly after Saints had been controversially denied the opening goal by VAR.

Forest’s Sam Surridge fired a late equaliser against his former club to earn his side a point at Bournemouth, leaving Gary O’Neil’s side in the bottom three, while teenage striker Evan Ferguson rescued a 2-2 draw for Brighton at Leicester City.