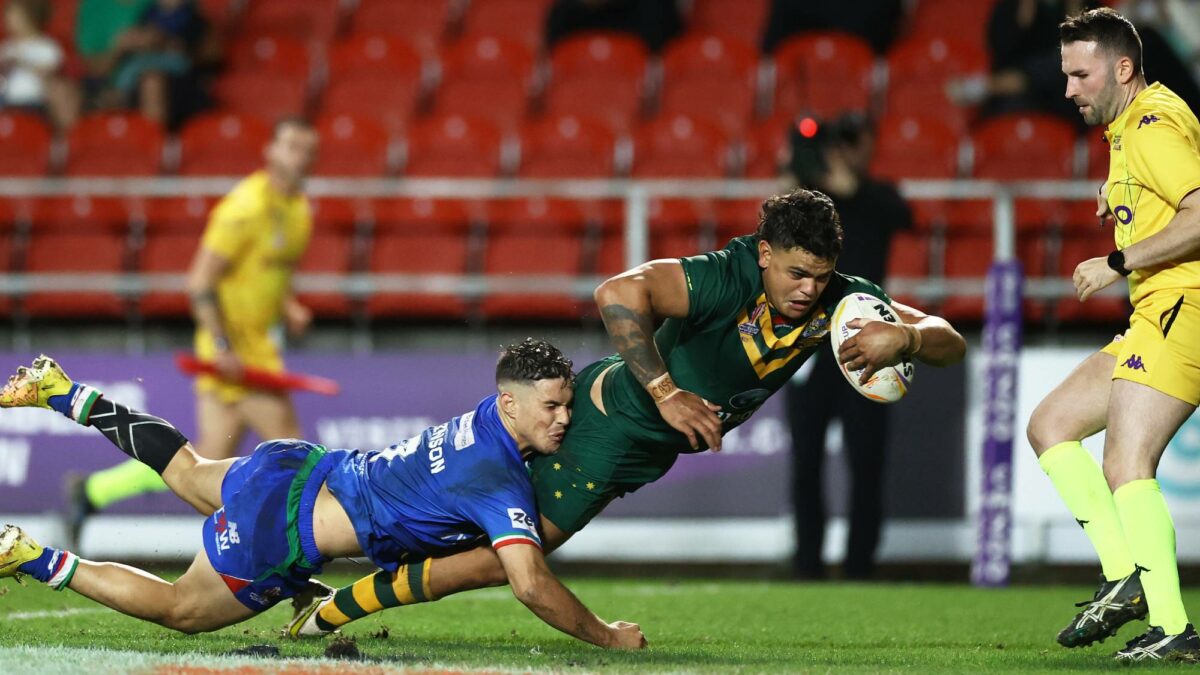 The way that Latrell Mitchell tore into opposition line-ups at the World Cup, you’d swear his best position would be in the forwards.

A ball-playing lock, a wide-running back-rower perhaps. Like a Gene Miles or a Noel Cleal of yesteryear who dominated in the backs before going on a forward march.

He’s got the size and strength to make a successful transition into the forwards to be devastating in that role, not that he’s ever expressed any desire to leave the relative comfort of the backs.

And it’s not that South Sydney need him to switch to the pack. They’ve got one of the game’s best locks in Cameron Murray, who just happens to be significantly smaller than Mitchell.

While it used to be the case that the biggest boppers on a rugby league field were all found in the pack, that is no longer the case with several NRL teams rolling out line-ups with centres and wingers more physically imposing than some of their forwards. 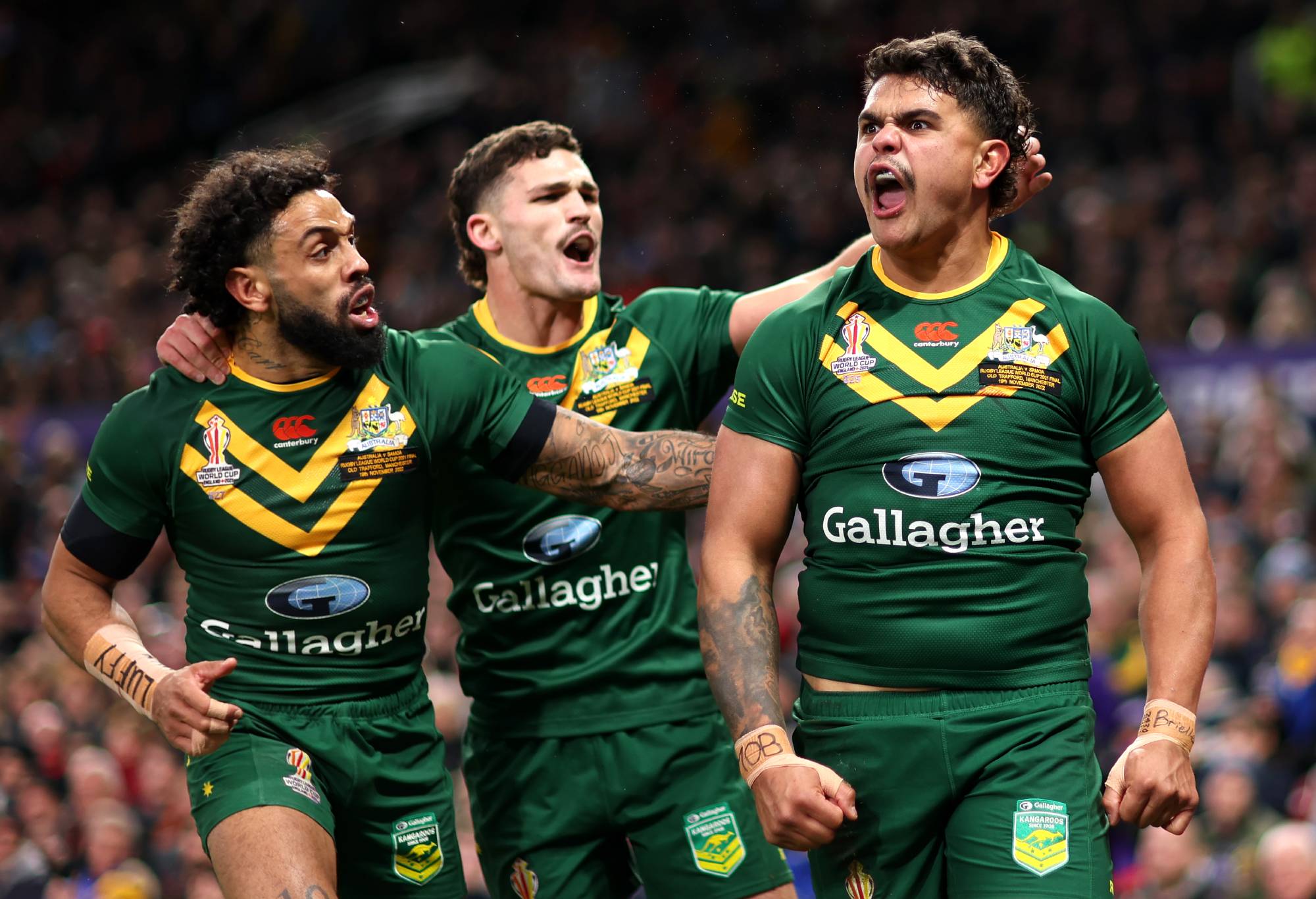 Murray recently said it’s an advantage for him to not be as big as some forwards in the six-again era where mobility is more important than muscle.

Mitchell is a forward in a back’s role, listed at 193cm and 102kg while Murray is the reverse at 184cm and tipping the scales at 95kg.

But while size, shape and speed varies little between centres, wingers, edge and middle forwards these days, Mitchell is bucking the trend when it comes to fullbacks.

Usually the fittest and most mobile players on an NRL team, Mitchell has carved out a unique style in the Rabbitohs’ No.1 jersey where the value of his contribution is in the quality rather than the quantity.

Mitchell averaged 26 possessions per game last season in his 17 appearances for the Bunnies, which ranked him near the bottom among regular fullbacks – surprisingly, Cronulla’s Will Kennedy (24) and Canberra’s Xavier Savage (20) were lower. 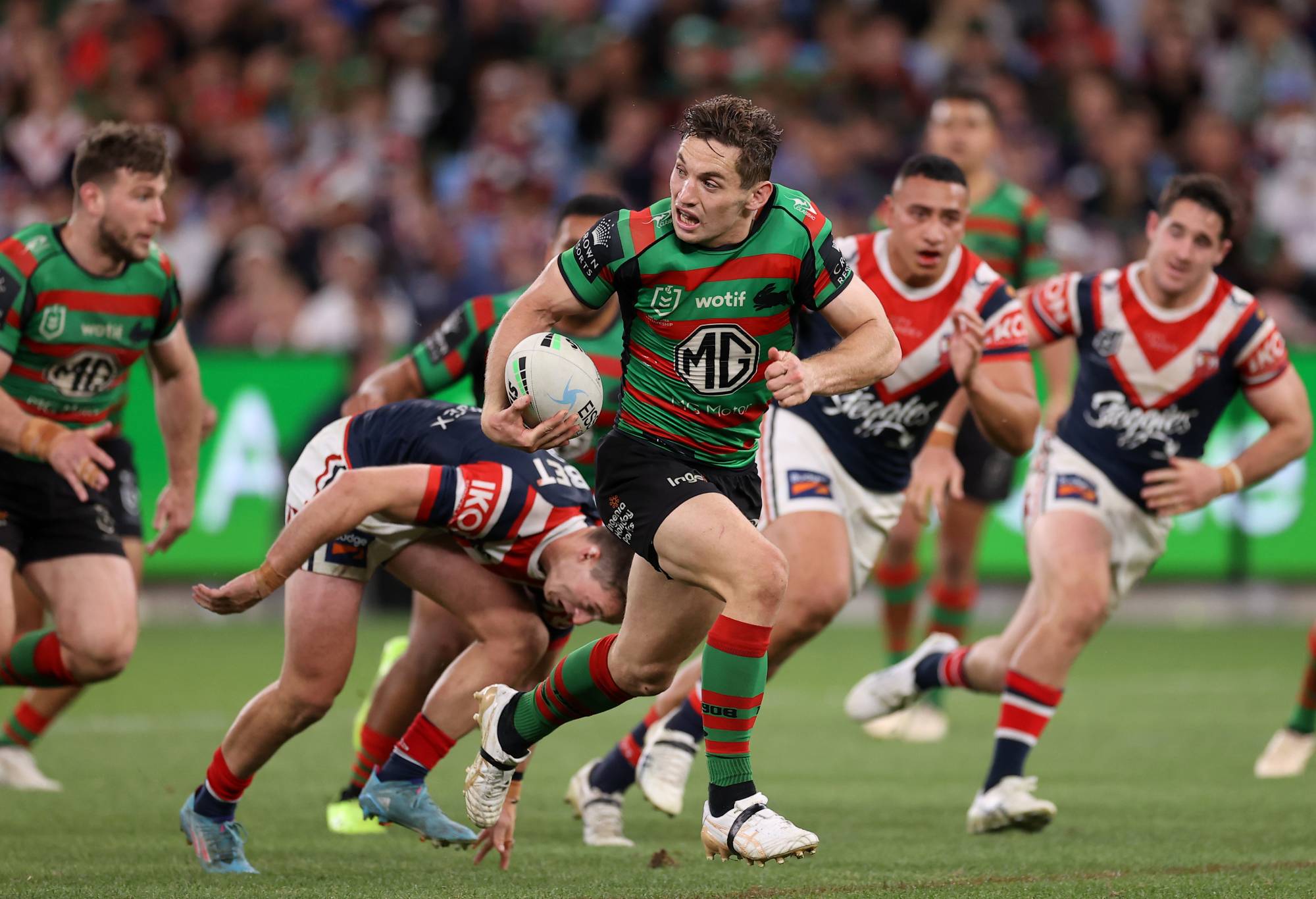 The fullbacks who were the most involved were Parramatta skipper Clint Gutherson (38), with North Queensland’s Scott Drinkwater, Panthers star Dylan Edwards and Brisbane’s Tesi Niu on 36 apiece.

Mitchell also compares unfavourably to his peers when it comes to running metres at 85 per game, more than doubled by Edwards (192) and also well down when compared with James Tedesco (184) and Tom Trbojevic (176).

While he excelled at centre in Australia’s World Cup campaign and has done so for NSW in the Origin arena, Souths would be reluctant to switch him there at club level because his involvement would be reduced even further.

A move to the halves has been mentioned as a possibility for Mitchell but Souths need to invest in young playmaker Lachlan Ilias after his encouraging rookie season while Cody Walker has a mortgage on the five-eighth’s role.

You could argue that Mitchell is better suited to five-eighth and Walker could thrive at fullback but coach Jason Demetriou would again be hesitant to make such a dramatic change.

Walker’s off contract at season’s end so if he can’t strike a deal with Souths, a switch to the No.6 jersey could be an option for Mitchell next year.

Blake Taaffe is a player of potential who stagnated last season and will probably replace Dolphins recruit Kodi Nikorima as the bench utility in 2023 but he is another option in the halves or fullback for Souths long term.

One player who is definitely making the move from the pack to the backs next year is Manly’s Josh Schuster.

At 185cm, he’s never going to be small and after starting last season at 106kg, he ballooned to 120kg after a calf injury in the pre-season was followed by syndesmosis surgery.

His fitness was never where it needed to be in his 13 appearances for the Sea Eagles and his form was well down on his breakthrough 2021 campaign in the second row.

After making the tough decision to withdraw from Samoa’s World Cup campaign to concentrate on shedding kilos, he’s done the hard yards in training to ensure he will be suiting up for Round 1 at his goal weight of 105kg.

Incoming coach Anthony Seibold has stated he intends to give Schuster first crack at the vacancy left at five-eighth by Kieran Foran’s departure to the Gold Coast.

Schuster doesn’t need to be on the ball every play of the game – Daly Cherry-Evans will remain the chief organiser who will handle the lion’s share of the kicking and passing duties.

Whether he’s over, under or around 100kg won’t matter much at all as long as he’s fit enough to play 80 minutes each week in a complementary role alongside DCE, creating his share in attack but also hitting holes on the edge as he did as a second-rower.

It will be a massive benefit having an ancillary playmaker at lock in Jake Trbojevic who will not only take some of the load off Schuster but send him through gaps if he’s clever enough to shadow the veteran forward on either shoulder when he runs to the line.

Many players will have a much shorter pre-season than usual due to the World Cup finishing just last weekend, so as painful as it was to miss out on Samoa’s surge to the final, Schuster’s decision to concentrate on getting in tip-top shape could pay huge dividends in the long run.