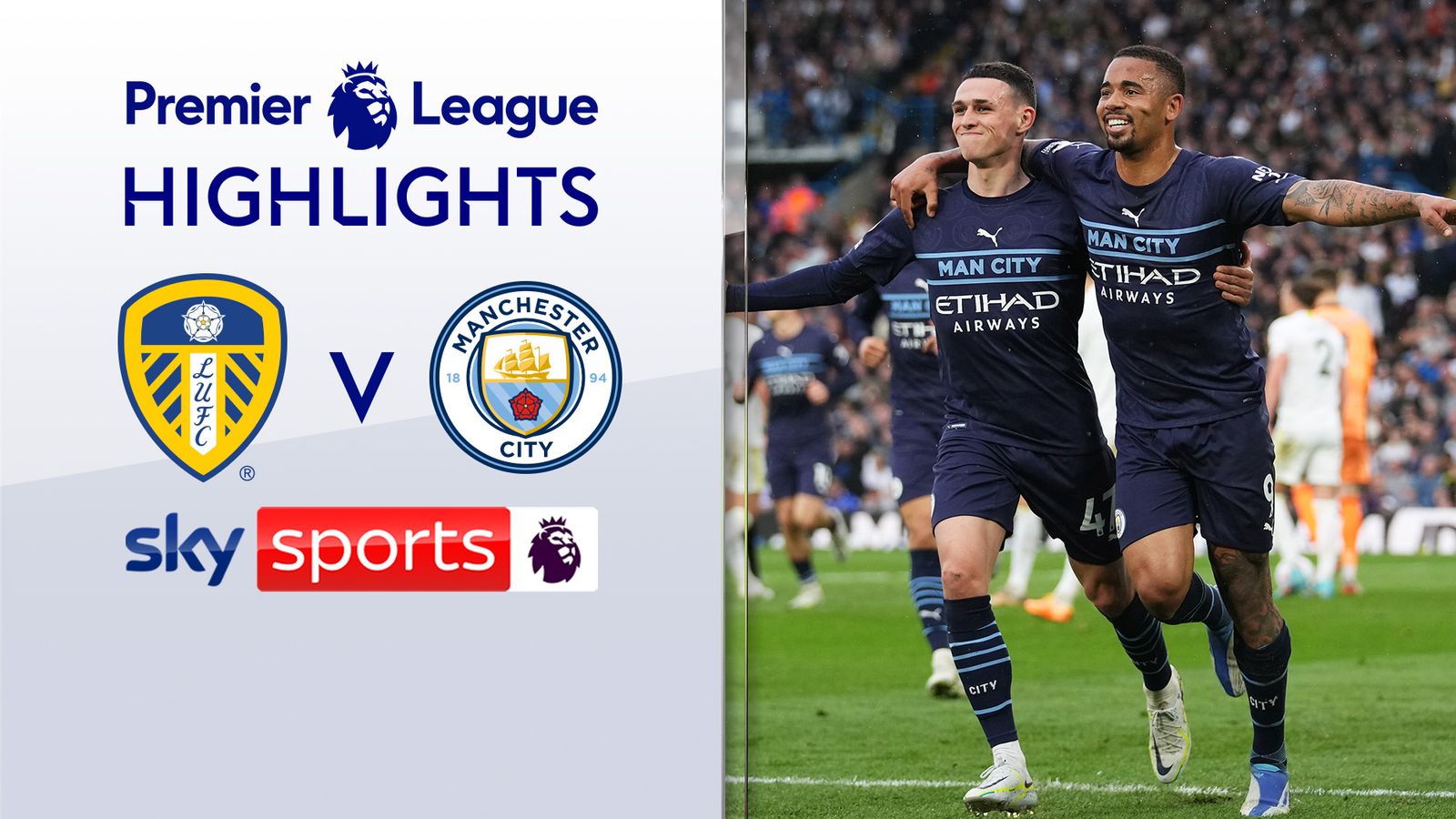 Report and free match highlights as Rodri, Nathan Ake, Gabriel Jesus and Fernandinho goals give Manchester City a 4-0 win at Leeds as they return to the top of the Premier League table, above Liverpool; Leeds – five points above the relegation places – have Stuart Dallas stretchered off

Man City powered to a 4-0 win after initially struggling to shrug off a tricky Leeds side at Elland Road to leapfrog Liverpool and return top of the Premier League.

City boss Pep Guardiola paid tribute to their hosts’ intensity, saying his side had been made to “suffer” on the back of a first hour where they struggled to match Leeds’ trademark style, but still managed to lead through a pair of set-piece goals, before two more late strikes sealed victory to lift them back to the Premier League summit.

They capped a frantic start when Rodri was left unmarked to glance home Phil Foden’s inviting free-kick, but completed barely three quarters of their passes in the Leeds half before half-time – their second worst figure of the season.

The hosts regularly looked threatening even though clear-cut chances came at a premium, and the nature of City’s celebrations when Nathan Ake hooked past Illan Meslier from a corner nine minutes into the second period was a sign of their relief at adding a two-goal cushion.

Man of the match: Phil Foden.

A raucous Elland Road threatened to galvanise the hosts should they find a way back into the game but when it never came, Jesus put the result beyond doubt when he buried Foden’s perfect pass with 12 minutes left, and Fernandinho put the icing on the cake with a long-range potshot which crept past Meslier in added time.

A disappointing afternoon for Jesse Marsch’s side, who remain five points above the relegation zone after Burnley dropped them to 17th earlier on Saturday, was compounded by Stuart Dallas’ nasty-looking knee injury just before half-time, which Marsch later confirmed was “not great”. Captain Liam Cooper had already been ruled out of contention ahead of kick-off when he limped out of the warm-up.

Clinical City punish Leeds’ set-piece woes
The enduring legacy of the Marcelo Bielsa era was evident as Elland Road witnessed another intense and open hour of football which ultimately promised the hosts more than it delivered, with Leeds often let down by a poor final pass or heavy touch.

That was never more evident than inside the first three minutes, when a Joao Cancelo slip on the half-way line gave Rodrigo a clear route to goal, but with two City defenders getting back he failed to look up and spot the unmarked Raphinha in the middle waiting for a simple finish.

In the absence of clear-cut chances for the hosts, City took full advantage from dead balls with Foden’s outswinging delivery headed inside the far post by Rodri, who was left totally free to beat Meslier from 12 yards.

The visitors’ second was just as frustrating defensively but also owed more to City’s movement, with Ruben Dias’ header back across goal from a Foden corner turned in by Ake, who hooked his leg around Pascal Struijk to fire home.

By the time Jesus and Fernandinho added their third and fourth, Leeds’ task had already been made far harder by their own shortcomings from set-pieces.

“Certainly between now and the end of the season, which is only four games away, they have to nail this down,” former Leeds striker Robbie Keane told Saturday Night Football. “At the other end, Man City are good at scoring goals from set-pieces, but Leeds have to defend them better.

“For the first one, the line’s all over the place. No one’s grabbing anyone. If Liam Cooper was playing, would he be marking Dias for those set-pieces? He was a massive loss for them before the game.”

Guardiola: We had to suffer for control

Victorious Man City boss Guardiola had appeared unimpressed with his side’s performance before half-time, with their usual slick passing and domination of the ball stuttering as they struggled to create in open play.

He told Sky Sports the league leaders had been made to work for victory at Elland Road, saying: “We knew coming here the way they play, we suffered a lot in the first half. But in the end we had control and could have scored more. An incredible result for us.

“They are so fast up front. Today was so important to make our chances to be champions again. We defended well and sometimes [in] these type of games set-pieces become so important. With Nathan Ake on the pitch, we are so strong.

“What a game Laporte played, he is doing an incredible season. We have five games to go, potentially six until the end of the season. I prefer to feel less pressure than I am feeling. It is a long season and this is the last effort.”

Dallas’ injury signalled the end of a first-half battle between the Northern Ireland international and Jack Grealish, who had been at one another almost since kick-off in a tussle given a light touch by referee Paul Tierney, who kept his cards in his pocket even when the Leeds player racked up five fouls on City players.

In going in strongly on Grealish the 31-year-old’s challenge left both players on the floor before Dallas was stretchered off. After the game, Marsch did not want to be drawn specifically on his condition but told Sky Sports his condition was concerning.

“The Dallas injury hurts us,” he said. “We think it’s probably not good. He has such a big heart and he’s such a big part of the mentality of our team. That one we feel. We hope Coops isn’t that bad. He just felt something in his knee.

“We’ll learn from today and can feel like we’re moving forward and making progress.”

Manchester City’s focus now turns to the Champions League as they travel to Real Madrid for their semi-final second-leg, leading 4-3 from the opening game. Pep Guardiola’s will continue their Premier League title bid when they host Newcastle next Sunday, live on Sky Sports with kick-off at 4.30pm.

Leeds’ next challenge in their top-flight survival bid sees them go to top four-chasing Arsenal next Sunday, live on Sky Sports with kick-off at 2pm. They end the season with home matches against Chelsea and Brighton, before going to Brentford on the final day of the season.