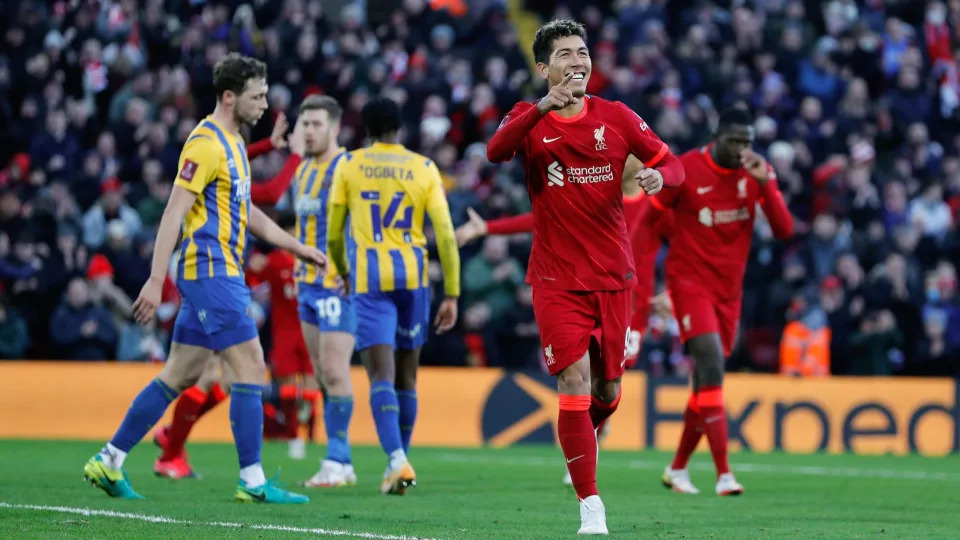 Premier League clubs entered the 2021-22 FA Cup in the third round this weekend, with the likes of Liverpool, Tottenham and West Ham joining Chelsea in the fourth round.

Below is a roundup of all of Saturday and Sunday’s results in the third round of the FA Cup, plus highlights and results from the fourth round draw…
Tottenham 3-1 Morecambe

On paper, it might look like Tottenham were never made to sweat as they cruised past League One side Morecambe and into the fourth round. On the perfectly manicured grass inside the Tottenham Hotspur Stadium, it was another story completely.

The Shrimps went 1-0 ahead in the 33rd minute, when Anthony O’Connor volleyed home from 10 yards out, and they held that lead until the game’s final quarter-hour. Then, it all came crashing down around them, as Tottenham scored three times in 14 minutes, as if the first 73 never happened.

Harry Kane and Lucas Moura came on as substitutes in the 69th minute, and the duo immediately changed the game and helped Tottenham pile on a more constant pressure in front of Morecambe’s goal. But first, Harry Winks got the equalizer from a free kick that no one touched and the ball found the back of the net on its own.

Moura rounded the goalkeeper to slot the winner home in the 85th minute and Kane completely the scoring by slotting home from a quick counter-attack three minutes later.

Like Spurs, Liverpool found themselves a goal down to a third-division side after a half-hour. Daniel Udoh slid in to turn home a cross in the 27th minute, though the advantage was short-lived, as Kaide Gordon (17 years old from Liverpool’s academy) made it 1-1 with a cool finish in the 34th. Fabinho converted what turned out to be the winning goal from the penalty spot in the 44th.

Roberto Firmino added Liverpool’s third goal in the 78th and Fabinho completed the scoring in the 93rd.

West Ham scored once in each half to secure a comfortable 2-0 victory in Sunday’s only all-Premier League tie. Manuel Lanzini smashed a shot through a sea of bodies and found the back of the net to make it 1-0 in the 34th minute.

Jarrod Bowen finished a devastating counter-attack after Michail Antonio played him into the penalty area with only Illan Meslier left to beat. Bowen slid the ball between Meslier’s legs, and West ham were through to the fourth round.
Wolves 3-0 Sheffield United

Daniel Podence bagged a brace (14th and 80th minutes), sandwiching a goal from Nelson Semedo in the 72nd, as Wolves continued their fine run of form with just two defeats (to Liverpool and Manchester City) in their last nine games (all competitions).
Chelsea 5-1 Chesterfield

Chelsea were 3-0 ahead by the 20th minute, as they cruised to a comfortable home victory over National League (fifth-division) side Chesterfield.

Timo Werner opened the scoring after just six minutes, followed by goals from Callum Hudson-Odoi 12 minutes later and Romelu Lukaku two minutes after that. Andreas Christensen made it 4-0 in the 39th minute and Hakim Ziyech completed Chelsea’s scoring from the penalty spot in the 55th.

Akwasi Asante pulled a goal back in the 80th minute, as the Spireites were knocked out after two wins to reach the third round — but not before collecting the sizable windfall of ticket sales which comes from playing a third round FA Cup tie at Stamford Bridge, with its capacity of nearly 42,000.

The shocking result of the round occurred at St. James’ Park, where Newcastle were bounced by Cambridge United of League One, 41 places below the Magpies in the English football pyramid (16th place in the third division).

Joe Ironside scored the game’s only goal in the 56th minute, resulting from a sequence of comedic defending by Newcastle inside their own penalty area. Martin Dubravka rushed out to smother an innocuous half-chance but lost his grip on the ball and spill it inside the six-yard box. The ensuing shot was headed off the goal line, but only as far as Ironside, who tracked back wrapped his right foot around the ball on the half-volley, somehow guiding it past three black and white-striped shirts.

Youri Tielemans (penalty kick) and James Madison put the Foxes 2-0 ahead after 25 minutes, but the Hornets hit back through Joao Pedro just two minutes later and looked like turning Saturday’s only all-Premier League clash into a thriller. Unfortunately for the neutrals, Harvey Barnes restored the two-goal lead in the 54th minute and Marc Albrighton completed the scoring in the 85th.

Brentford’s 4-1 victory might sound a bit more comfortable than it was in reality, despite the fact that League Two side Port Vale took just one shot in the game (and scored from it).

Marcus Forss opened the scoring in the 26th minute and Bryan Mbeumo scored his first goal in the 66th to make it 2-0. Port Vale halved the lead when Kian Harratt got the lone shot off in the 70th minute, but Mbeumo quickly brought it back at 3-1 and then completed his hat trick from the penalty spot in the 87th.
FA Cup 3rd round fixtures & results
FA Cup 3rd round results