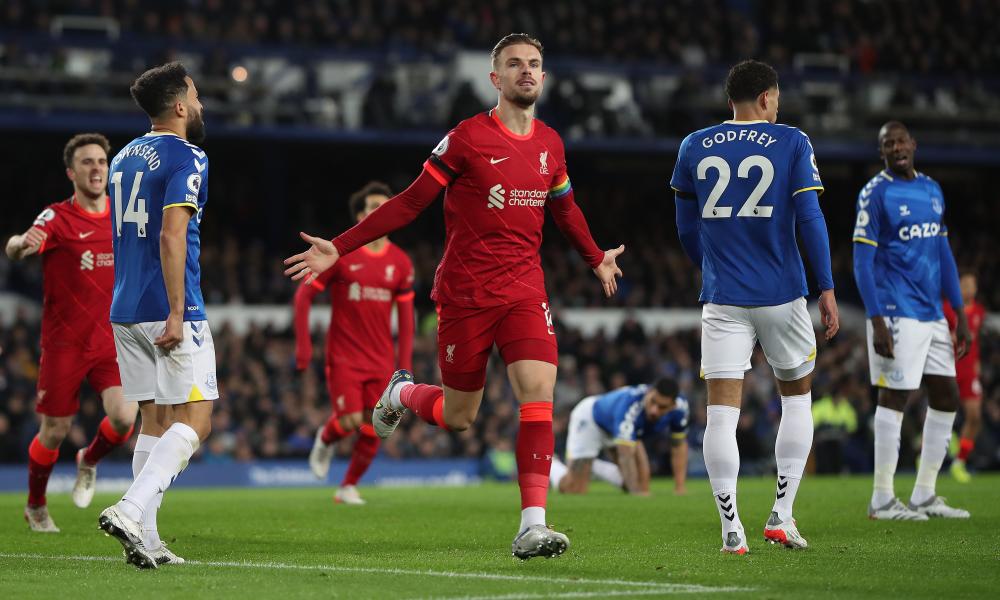 For Evertonians, perhaps the most upsetting aspect of the past week has been the number of Liverpool fans and former players reflecting on what a shame it would be if they got relegated. “I would be sad and I’m sure there’s a lot of other Liverpool fans who’d feel the same,” Ian Rush said on Friday. Jürgen Klopp used his press conference to lament Everton’s plight, admitting he would miss the derby if they ended up in the Championship next season.

In a way, the outpouring of lament is its own sly little twist of the knife. Turns out Everton could bear Liverpool’s hatred. They could live with the taunting and the tribal banter. It’s the sympathy they can’t stand.

But as a measure of the yawning void between these two clubs before the 240th Merseyside derby, it is as good as any. Doubtless there are still a few Liverpool fans out there who would gleefully celebrate Everton’s relegation as a fifth trophy, just as Everton fans will enthusiastically cheer on Villarreal in the Champions League on Wednesday.

Related: Premier League: 10 things to look out for this weekend

Yet such is the divergence between them that you increasingly get the sense that neither is any longer the business of the other. In sporting terms, these two clubs may as well inhabit different worlds.

Frank Lampard said he would take a draw at Anfield on Sunday. Of course he would. So would most of his predecessors. But until recently it is a prospect none of them would dare entertain, let alone utter on camera. But Liverpool have bigger prizes on their mind these days and so do Everton.

The formbook does not go out of the window. Local pride is not at stake. The wider tussle has already been won and lost. Liverpool v Everton may still be a derby in the strictest definition of the word. But it is no longer a rivalry.

These things have always ebbed and flowed. Everton and Liverpool were in separate divisions for most of the 1950s, went head to head for much of the 1980s and as recently as 2013 Everton finished above Liverpool in the league. But rarely in our lifetimes has the gulf felt as wide or as dramatic as it does now. Liverpool finished 14 places ahead of Everton in 1998 and 50 points ahead in their title-winning season of 2020. Barring an extreme shift in fortunes, both marks are likely to be smashed in 2022.

How we reached this point is a more complex issue: a confluence of gambles taken and not taken, of mis-steps and mismanagement, of a team who discovered their identity and a team who mislaid theirs. It’s easy to forget Liverpool have been a dysfunctional club for almost as long as Everton, enduring their own decades of nostalgic neglect, forlornly chasing lost glories. Take a snapshot of the two clubs a decade ago and on the pitch or off it, there is frankly little to choose between them.

For all the disparity in resources, the biggest contrast over the subsequent years has been one of vision and conviction. All clubs make mistakes, lose their way, undergo periods of turbulence or crisis. Liverpool may have hit the jackpot with Klopp, but it also required them to keep the faith in his leadership and brand of football, even when results took a turn and nobody could really be sure what lay ahead.

By comparison, Everton’s reaction to a difficult few months under Ronald Koeman in 2017 was to hit the panic button and hire the cloven hooves of Sam Allardyce to coach a squad full of technical passers. In the short term it worked. But the brake it put on their long-term ambitions was fatal. It broadcast to everyone – future coaches, prospective players, fans and sponsors – that their principles were essentially disposable. Everton arguably haven’t been the same club since.

Even through the briefly promising Marco Silva years, the decadent Carlo Ancelotti years, the Rafa Benítez months, the strange outbreaks of Duncan Ferguson, there has been no sense of wider strategy, no basic idea. Go down the list of Liverpool’s dozen biggest signings of the past decade and only Christian Benteke really stands out as a mistake. Go through the Everton list and you are confronted by an army of squandered talents, from Gylfi Sigurdsson to Yannick Bolasie, Moise Kean to Davy Klaassen, players signed in the service of a grand masterplan that would invariably be binned in a matter of months.

Lampard, for his part, does at least seem to have a clear idea of how he wants Everton to play and who he wants to do it. Last week, footage emerged of a training drill in which Everton were practising quick long balls over the top of a high back line, similar to the one they are likely to encounter on Sunday.

Certainly it will be interesting to see what he can do with a little time, a full transfer window and a squad that for all its unevenness and injury blight is still far better than its league position would suggest.

In a way you wonder whether the reality of being left behind by their city rivals may just be a blessing in disguise. For some time now – decades, really – so much of Everton’s psychology and approach have been bound up in trying to emulate Liverpool, equal them, surpass them.

That giant blur of red in their windscreen has informed some of their costliest mistakes and most destructive delusions.

Well, that war is over. The blur of red has disappeared into the distance and it isn’t coming back. Best to start over, in your own time and on your own terms.