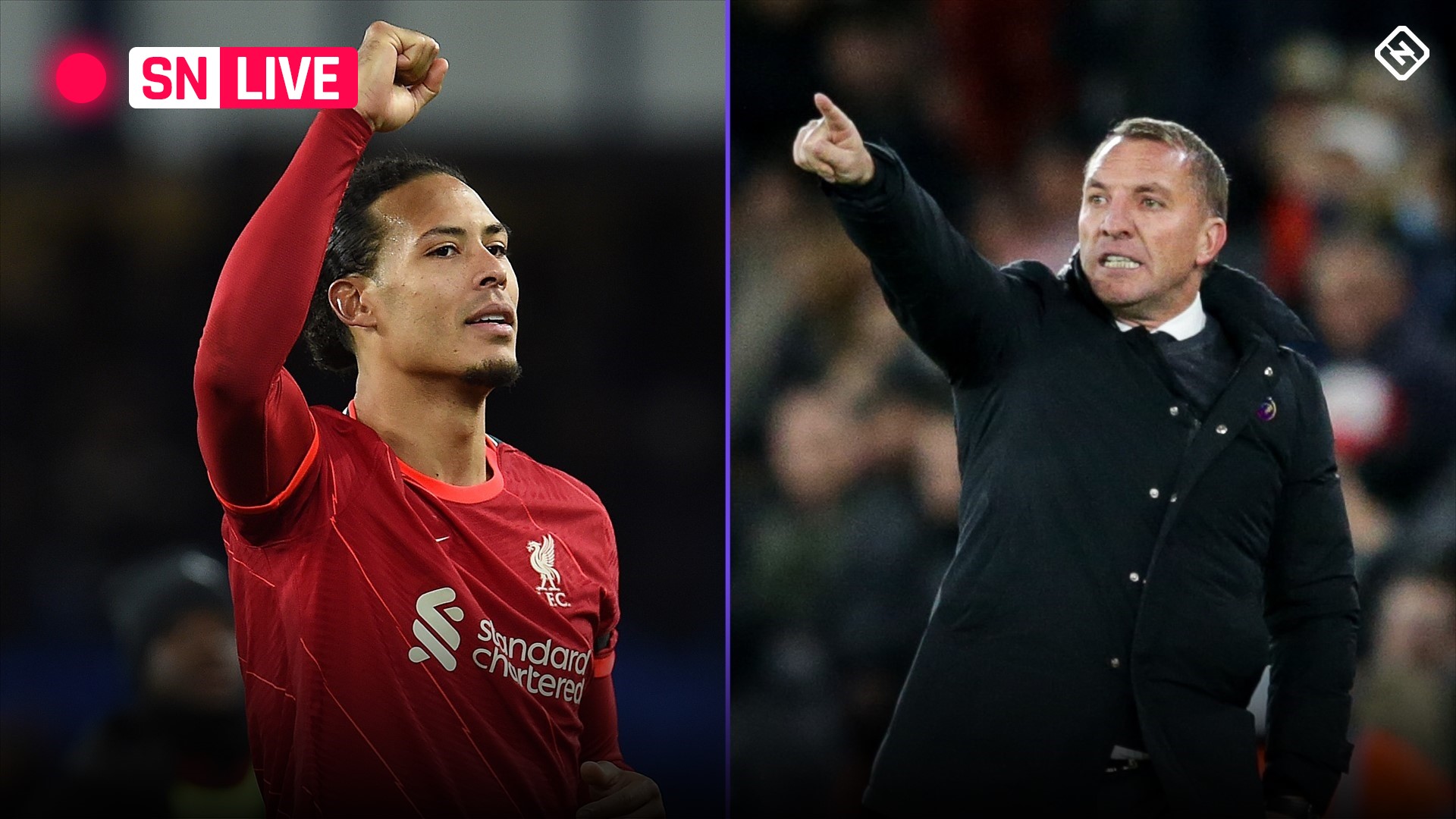 Liverpool saw its six-match league winning streak come to an end last time out in a controversial 2-2 draw at Tottenham, but the title chase is still very much on for the Reds.

After an unexpected layoff on Boxing Day thanks to a COVID-19 postponement, Liverpool is now rested and revived ahead of a difficult road test at the King Power Stadium. The Reds have nearly a full complement of players available for selection, and could see the return of Virgil van Dijk after his bout with COVID-19.

Leicester City cannot say the same, as the Foxes are down a number of key players, and after a taxing 6-3 heavyweight battle against Manchester City just 48 hours prior, Leicester City will face an uphill battle against another title challenger. It’s a situation that pushed manager Brendan Rodgers to have a go at the Premier League schedule makers in the build-up to the game.

Liverpool sits six points back of leaders Manchester City, and with Pep Guardiola’s side looking like true European powers, there is no room for error for Liverpool to drop points in consecutive matches. Still, watching Leicester go toe-to-toe with City in a true roller coaster match will alert Liverpool manager Jurgen Klopp of the fight that lies ahead.

Sporting News will be following the match live and providing score updates, commentary and highlights as they happen.

55th minute: HUGE miss from Sadio Mane, who hasn’t scored or assisted a goal in eight Premier League matches. He gets past Timothy Castagne in the six-yard box but his shot from point-blank range is rifled over. Another big opportunity missed by Liverpool.

Changes for both sides, Liverpool brings Naby Keita on for Alex Oxlade-Chamberlain who looks frustrated as he comes off. Leicester City sees Youri Tielemans enter the fray, with Hamza Choudhury making way in midfield, while Kelechi Iheanacho comes off for Ademola Lookman.

Sadio, for the love of God.

52nd minute: Cagey start to the second half, but Leicester is nearly in as Dewsbury-Hall almost finds Vardy streaking down the middle. It’s Kostas Tsimikas who slides in to get a critical touch and redirect the ball out of play, denying Vardy the chance.

Liverpool is readying substitutions, it appears Naby Keita, James Milner and Roberto Firmino could all be options for Jurgen Klopp shortly.

46th minute: Second half under way, no substitutions as of now.

An entertaining but stacatto first-half ends goalless. The big moment in the opening frame is Schmeichel’s big penalty save on Salah, but he has another great save to go along with it, while Jamie Vardy came closest for Leicester City.

Liverpool had its chances for sure, but the Reds will be disappointed overall in its production in the final third. Leicester City overall did its job getting to halftime without conceding, but the Foxes didn’t exactly do so with aplomb. Both sides will hope to sort things out in the locker room. This game feels like it has yet to truly reach high gear.

Some are focusing on Jordan Henderson’s poor first half…

43rd minute: Hendo is feeling the volley tonight. Off a corner, his third volleyed effort of the first half, this one maybe the closest yet. Goes with the leg whip and comes very close to placing it in the top corner. Less vicious than his first, but definitely the closest of the three to the net.

Leicester City is giving away possession constantly in its own half, and could eventually be punished for it. They’re trying to play on the counter, but aside from one or two big moments, the counters have resulted in more giveaways than anything else.

38th minute: It took a half-hour for this game to truly kick off but its all happening now. Maddison ended up with a chance similar to Vardy’s a few minutes earlier, but his shot skittered harmlessly across the face of goal. Leicester fans making a lot of noise as the Foxes have been more of a threat recently.

Liverpool have lost their way a bit here. Second best in the physical battles. Lacking their usual fluency going forward

36th minute: Matip, on a high from his key block, then went marauding past defenders and nearly produced a defender’s solo goal for the ages, but fell one player short, eventually dispossessed by the last Leicester man back. What a wonderful and incredible goal that would have been!

35th minute: The first real warning sign from Leicester City. Jamie Vardy plays a brilliant one-two with James Maddison, but his goalbound shot is blocked heroically by Joel Matip. It was a threat to take the lead had Liverpool’s center-back not been there to turn it away at the right post.

32nd minute: Another STELLAR save by Schmeichel on Salah again! This time from open play, a bobbling ball fell to Salah at the right post, and he let a left-footed effort rip from a tight angle. Schmeichel made himself big and pushed it over the crossbar. Pressure does feel like its mounting on the hobbled Leicester City defense.

26th minute: The game feels like it’s waiting for another big moment, but since the penalty there haven’t been many key moments created by either side. Liverpool has put together a few half-chances, with Jordan Henderson again sending a volley over, this one with less venom than the last. Vardy had a breakaway chance for Leicester but the offside flag ruined that.

#LFC being let down by their inability to control the ball inside the area. Very disappointing performance so far from the visitors.

14th minute: PENALTY SAVED! Liverpool turned away. It’s Salah who goes down under a challenge from Wilfred Ndidi on the edge of the six-yard box, an easy call for the referee. Salah steps up, and his effort was poor. Schmeichal picks the right way and denies.

8th minute: Liverpool beginning to get settled in with long spells of possession. Sadio Mane has a turn-and-shoot effort blocked, while Jordan Henderson volleys a vicious one over the bar. Hendo hit it pretty well as it was dipping back down towards the ground, an audacious effor that didn’t miss by much.

4th minute: This game is already electric. Diogo Jota has a great chance in the Leicester City penalty area but his half-hearted shot is blocked. Joel Matip is then with a very early yellow card for a foul in transition on Iheanacho. Fabinho also could have been cautioned for a hard tackle seconds earlier on Choudhury but was let off easy.

2:58 p.m. ET: Kickoff imminent. NBC studio analyst Robbie Mustoe suggested Leicester City would be foolish to “go for it” and believes they will sit back and absorb pressure to then hit on the counter. We haven’t really seen Brendan Rodgers back down from an opponent like that, but with the injuries this Leicester City squad faces…

2:47 p.m. ET: With the match nearing kickoff, Jurgen Klopp gave his thoughts on the game, mentioning that there will be a focus on keeping James Maddison at bay, and stating Thiago picked up a slight injury in training and was left out of the matchday squad as a result.

2:05 p.m. ET: The lineups are in. Liverpool officially has Virgil van Dijk back from COVID-19, who makes his 150th appearance for the Reds. Both Jamie Vardy and Wilfried Ndidi, whom Brendan Rodgers admitted are injured, make the starting lineup for the banged up Foxes.

1:24 p.m. ET: Kelechi Iheanacho, who could continue to up front for the injured Jamie Vardy, speaks about facing Liverpool for the second time in a week.

“We’re looking forward to it. We played them in the cup, it was a good game but we lost. We’re hoping to do better in the Premier League and get something out of the game.”

12:49 p.m. ET:  Their team’s lineup may be ravaged, but Leicester City supporters should be in a good mood at the King Power on Tuesday. (The New York Giants could take a lesson or two here).

If you’re a Leicester City fan, buckle up. The Foxes saw right back Ricardo Pereira suffer a broken leg in the EFL Cup (Carabao Cup) defeat to Liverpool, and he will miss significant time. Center back Caglar Soyuncu also left that match with a hamstring injury and is out for the forseeable future. Jonny Evans is unavailable for the festive fixtures with a thigh problem, and Harvey Barnes, Ryan Bertrand, and Wesley Fofana will all be missing as well.

Jamie Vardy and Wilfried Ndidi were both on the bench for the Boxing Day loss against Manchester City, but Rodgers admitted they are both injured, and were included only as emergency options due to a lack of depth. Both were included in today’s starting lineup, which speaks to the struggle Leicester City currently faces.

While Leicester’s bad news piles up, things are looking up for Liverpool. The club announced that Van Dijk has cleared COVID-19 protocol and is ready to return, as are Thiago, Fabinho, and Curtis Jones.

The only player unavailable for the time being is left back Andy Robertson who is suspended due to the red card picked up against Tottenham, while Harvey Elliott’s serious ankle injury keeps him out until at least January. Otherwise, the squad is as fit as can be around this time of year.

How to watch Liverpool vs. Leicester City

The match will be broadcast on NBCSN (English) which is available to  stream on fuboTV . New fuboTV users can try it via a free 7-day trial .

In addition to being on NBCSN, the match will also be accessible via the NBC Sports website for authenticated cable, satellite or telco subscribers.

Leicester City simply faces an unfair uphill climb in this match, having played 48 hours previously against the league leaders. Liverpool got an unexpected rest, and as a result, this match could end up with a harsh result.

MORE: All the results from the Globe Soccer Awards

Still, both teams are proficient at finding the back of the net, and instead of backing a well-managed Leicester City side to get blown out, back the over despite the somewhat unsavory odds. This could be a blowout yet, but the Foxes will put up a fight like they did in the Carabao Cup against Liverpool (3-3 draw) and again against Man City in the 6-3 Boxing Day thriller.