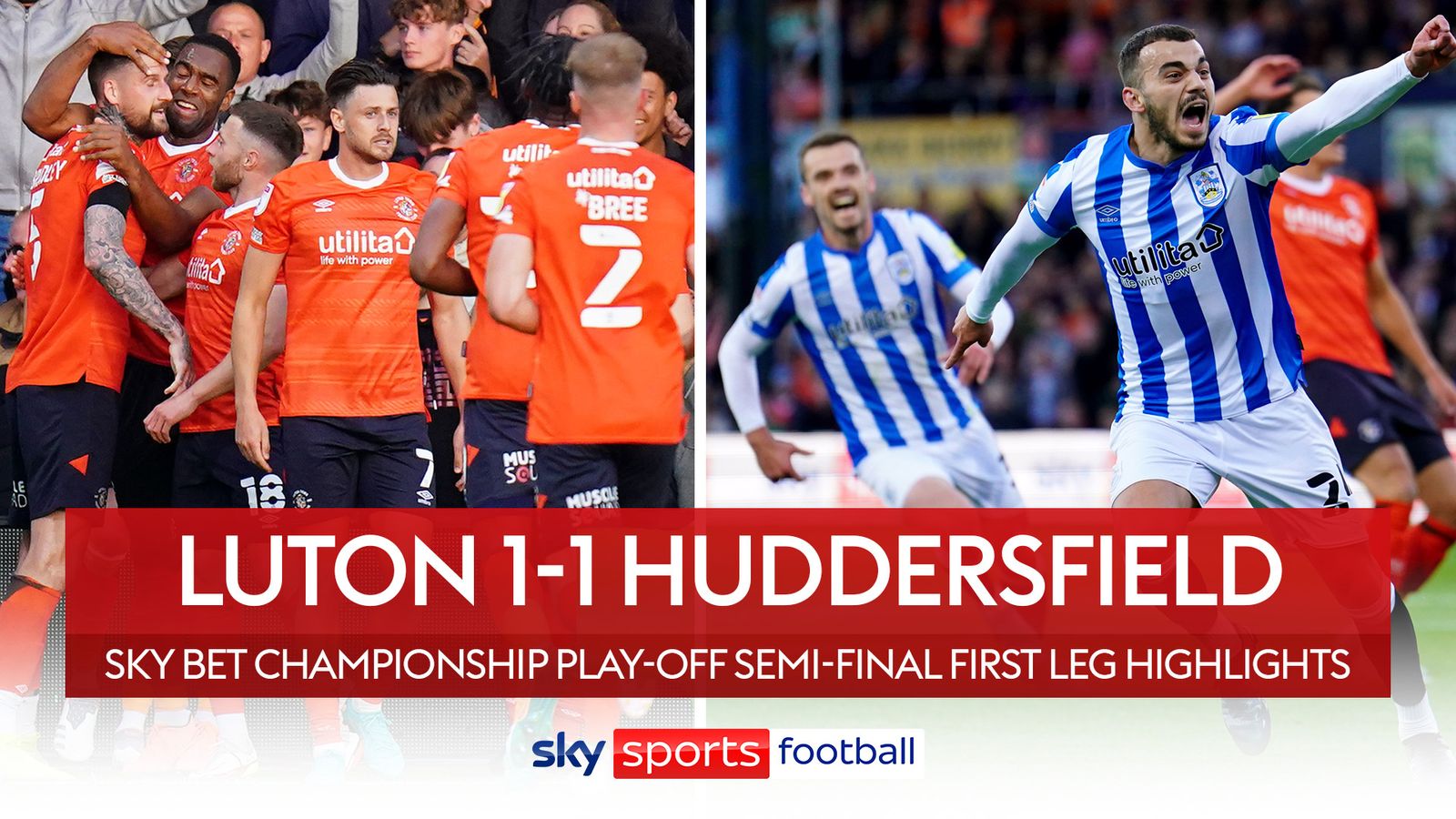 Captain Sonny Bradley’s equaliser set up a winner-takes-all showdown on Monday as he earned Luton a 1-1 draw with Huddersfield in the Championship play-off semi-final first leg.

Having started the better on home soil, the Hatters were dealt a 12th-minute blow when Daniel Sinani’s smart finish beat Matt Ingram at his near post.

But in a game with two sides so potent from set-pieces it was no surprise when Luton levelled from a free-kick, curled into the area by Harry Cornick and dispatched emphatically from close range by the skipper.

Both sides could have had first-half penalties and Rob Jones’ decision to overlook a clear trip on Cameron Jerome, a shout Luton boss Nathan Jones later called “stonewall”, highlighted their improvement since their equaliser.

After half-time they failed to retain that momentum as Huddersfield began to wrestle back control. The Terriers continued to look the more potent throughout the half but could not find a way to trouble Ingram, setting up an all-or-nothing second leg in Monday night’s return fixture in West Yorkshire, live on Sky Sports.

Spoils shared in Kenilworth sell-out
Referee Jones was given a baptism of fire within the first 15 seconds when Toffolo got the wrong side of Bree in the penalty area and appeared to be tripped, but he was quick to raise his arm for a goal kick instead of pointing to the spot.

Luton would thank him for that decision and took advantage of that early let-off when Bree forced Lee Nicholls to tip over soon after, but a bright start was punctured as Huddersfield netted from their first shot on target.

Toffolo and Danny Ward exchanged passes before looking into the area for Sinani, who looked like he had taken the ball too wide around Reece Burke before arrowing it past Ingram with a sharp finish.

The visitors decided to dig in and sit deep with a lead in their grasp and Luton lacked the quality to break them down in open play, but found a way through from one of their trusted set pieces. Cornick’s delivery from deep on the left was pinpoint to meet Bradley at the near post, and he fired past a stranded Nicholls for their to add an 18th goal from dead balls this season.

The turnaround could have been complete had Luton been given the penalty replays suggested they deserved when Sarr tangled with Jerome in the box and appeared to pull him down as he lost his own balance.

Huddersfield were happier to hear the half-time whistle but were just as relieved that Luton never regained their momentum in the second period, and instead Sarr was denied a penalty of his own when he was brought to ground from a free-kick.

There was little in the way of goalmouth action from either side as Luton rallied but struggled to in a foothold in the second half, while Huddersfield remained in second gear knowing a draw would favour them going into the second leg at the John Smith’s on Monday night.

Jones: Ref missed a penalty – and a red card

Luton manager Jones felt the scoreline reflected the pattern of the game but felt the result may have been different had Jerome been given a penalty, and Sarr a red card, when the two clashed shortly before the break.

He told Sky Sports: “It’s a tight game. The margins are really tight between the sides. First half we were outstanding, we should have had a penalty and a possible red card because [Jerome] has been denied a goal-scoring opportunity. I know they had half of one too, but obviously I see it through orange eyes. Ours was stonewall. He’s taken him out. But it’s one of those things and they’ll be saying the same.

“They’re a good side and it will be difficult, but it’s all to play for. We have to go to Huddersfield and win the game, but we probably would have taken that at the start of the season.

“We would have liked to have taken a lead there, but it was very important not to lose this game, because then they can shut up shop. Their goalkeeper takes an age doing everything, we know this and there’s been an article written about it, but they get away with it, slowing it down to ridiculous levels. We know they can do that.”

Corboran was more reserved in his assessment of his own side’s penalty shout, telling Sky Sports: “It was very clear to me Toffolo was fouled in the box. But the referee didn’t think so and we need to respect the decision he made for both teams.

“The result was fair for me today because Luton were a little bit better than us in the first half and we were better in the second half. We scored but then we didn’t have enough of the ball to develop our style like we did in the second half.

“But second half we were excellent and we played in the offensive half like we wanted. We controlled it well, but unfortunately we couldn’t defend the lead we had.

“It was exactly the type of game I was expecting. It was impossible to tihnk we could close out the semi-final today. It will be another very demanding game at home, but we want to keep going in the playoffs. We know that at home we’ll have our supporters backing the team and for me that and the condition of the pitch should help us. So let’s see.”

“It’s the extension of the arm that makes it for the first,” Davies told Sky Sports. “Maybe because Toffolo is a bit under it that may be what stopped him from giving it.

“For the second, my immediate thought was penalty. But the referee might have seen that Jerome was waiting for it. It may have been more a tangle of legs. In real time yes, when you look back on it probably not.”

McAnuff was in full agreement, adding: “For me I have to say it’s a penalty on Toffolo. It may have come too early for the referee to make a decision.

“I think it’s the right decision in the end not to give the one on Jerome. It was Jerome coming on to him and clipping the back of Sarr’s legs.”

What’s next?
These two sides meet again at the John Smith’s Stadium on Monday night, live on Sky Sports Football from 7pm; kick-off 7.45pm. The winner will go on to meet one of Sheffield United or Nottingham Forest at Wembley in the play-off final on May 29.