The crowd in Houston seems to be demanding answers over Joe Rogan’s absence from UFC 271.

The controversial podcaster normally hosts all of UFC’s major events, sitting ringside in commentary as well as conducting the post-fight interviews inside the octagon.

But he’s been replaced today by Michael Bisping. No reason has been given for Rogan’s absence.Rogan is controversial at the best of times, but the past fortnight has been a firestorm around the American sports caller.

The crowd could be heard chanting “free Joe Rogan”, seemingly under the impression he has been told not to attend.

His backwards views on COVID-19 and vaccinations have put many people offside, and famous musicians – led by Neil Young – have started to pull their art off Spotify in protest over the platform hosting Rogan’s podcast. 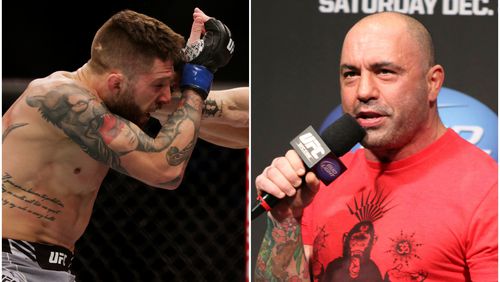 It’s unknown if Rogan’s absence from today’s UFC event is related to the ongoing controversy.

When the Rogan issue was raised at Friday’s press conference, Adesanya stole the microphone to put his two cents forward.

“I’ve been in this fight game since 2008 and Joe Rogan is one of the nicest, coolest, humble motherf—-rs I’ve had the pleasure of working with, understand that.”