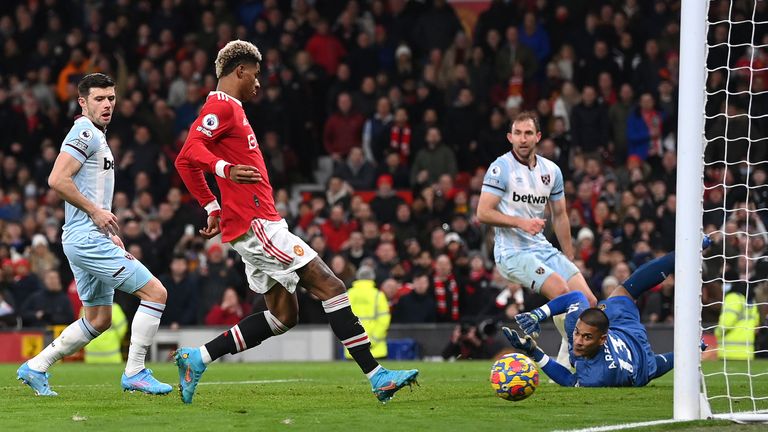 Marcus Rashford was the hero for Manchester United as his stoppage-time goal saw them beat West Ham 1-0 and leap above the Hammers into fourth.

In a game that looked certain to be heading for a draw, all three of Rangnick’s substitutes combined as Anthony Martial played in Edinson Cavani, who crossed for Rashford to provide the finishing touch which broke West Ham’s resilience at Old Trafford.

4 – Marcus Rashford has scored a 90th-minute winning goal for the fourth time in the Premier League, at least twice as many as any other Man Utd player. In fact, no player has ever scored more such winners in the competition’s history. Mentality. pic.twitter.com/OVbt1CJF9t

Earlier in the game, it was a first half that promised much with West Ham making a bright start before United took control.

Cristiano Ronaldo was inches away from getting on the end of Bruno Fernandes’ cross and the Portugal international had appeals for a penalty turned down by referee Jon Moss after a coming together with Kurt Zouma, but the opening 45 minutes petered out with neither side having a shot on target.

The first shot on target in the game came early in the second half as Alphonse Areola, who was making his Premier League debut for the Hammers, flung himself into action to keep out Fred’s powerful drive.

Jarrod Bowen’s strike from the edge of the area then hit the side netting before Raphael Varane had a free header, but he failed to test Areola.

United threw on Rashford, Cavani and Martial as they looked for a winner which would take them above West Ham and into fourth, but initially it was the Hammers who went closest in the closing stages as Tomas Soucek headed agonisingly wide and David de Gea pushed a deflected cross past the post.

It looked like Manchester United were going to miss out on the opportunity to go fourth as West Ham held firm, but there was to be one final sting in the tail as Rashford struck from close range for the second consecutive game.

The VAR checked a potential offside against Cavani in the bild-up to the goal but there was to be no last-gasp reprieve for David Moyes’ men as United boosted their side’s hopes of finishing in the top four.

“That win is all the sweeter for Ralf Rangnick given the decisive goal involved all three of his substitutes. Martial fed Cavani, who produced the cross for Rashford to finish.”

Man of the match: Marcus Rashford.

Rashford: No better feeling in football

Marcus Rashford savoured his match-winning moment and expressed his delight at rediscovering his goalscoring form.

“They are the best games to be involved in and when you’re on the winning side of it, it’s a great feeling,” Marcus Rashford told Sky Sports after the game. “Nothing really beats it in football.

“Very happy today and a very big game against an opponent who are very tight with us at the moment, so it was very important that we got the win.

“You might not see it now but, come the end of the season, three points can be the difference between being in or out of the top four.

“I’m pleased we managed to get them today and we have to use that as motivation.”

Rashford has now scored twice in two games having failed to find the net in his previous 11 appearances in all competitions.

“I think, for any forward, when you go through a patch of not scoring for a few games, it’s a great feeling when the goals do start coming back,” he added.

“We just have to keep moving forward now and keep going in the right direction.”

‘Result is all that matters for United’

“As soon as West Ham kicked off after the Rashford goal the full-time whistle went. It wasn’t a great game, but it would have been job done for West Ham. They would have got a point and done what they needed to do, making sure they didn’t get beat.

“But, in the end, the three Manchester United subs worked well and fair play to Rangnick. All three were involved in the goal.

“It wasn’t the performance of a Champions League side, but you have to take everything into consideration. They are playing West Ham who have been in and around the top four for the whole season.

“It was a difficult game, and, in the end, they got over the line and won it.

“They’ve just got to get in the top four now and if they play like that and do it, they’ll be more than happy next season.”

What next for West Ham? Should they invest?

“I thought West Ham should have gone into the transfer market at the start of January. Things looked a bit rosier at the start of the month. They looked like they had a really good chance of getting into the top four and I thought they might invest then.

“It’s a big gamble to invest now because there are so many teams in and around them. They can go and spend £60m to £70m in the next week and they could still finish eighth. That’s how tight it is.

“There are too many big teams with games in hand on them now and if they invest, who are they going to get. I think I’d have to leave it as it is now, if I was West Ham.”

Opta stats: Moyes’ wait for away win at Old Trafford goes on…

West Ham manager David Moyes has never won an away Premier League match against the Red Devils in 15 attempts (D4 L11), with only Harry Redknapp managing as many away games at Old Trafford without winning in the Premier League era (15 games).

The Hammers have lost four of their last seven away games in the Premier League (W2 D1), one more than they’d lost in their previous 17 on the road in the competition (W10 D4 L3).

Manchester United have won 21 of their 26 Premier League home games against West Ham (D3 L2) and are unbeaten in their last 14 against them at Old Trafford since a 1-0 loss in May 2007.

Man Utd have only lost once in their last 10 Premier League games (W6 D3), and have kept their first clean sheet in the competition in six matches.