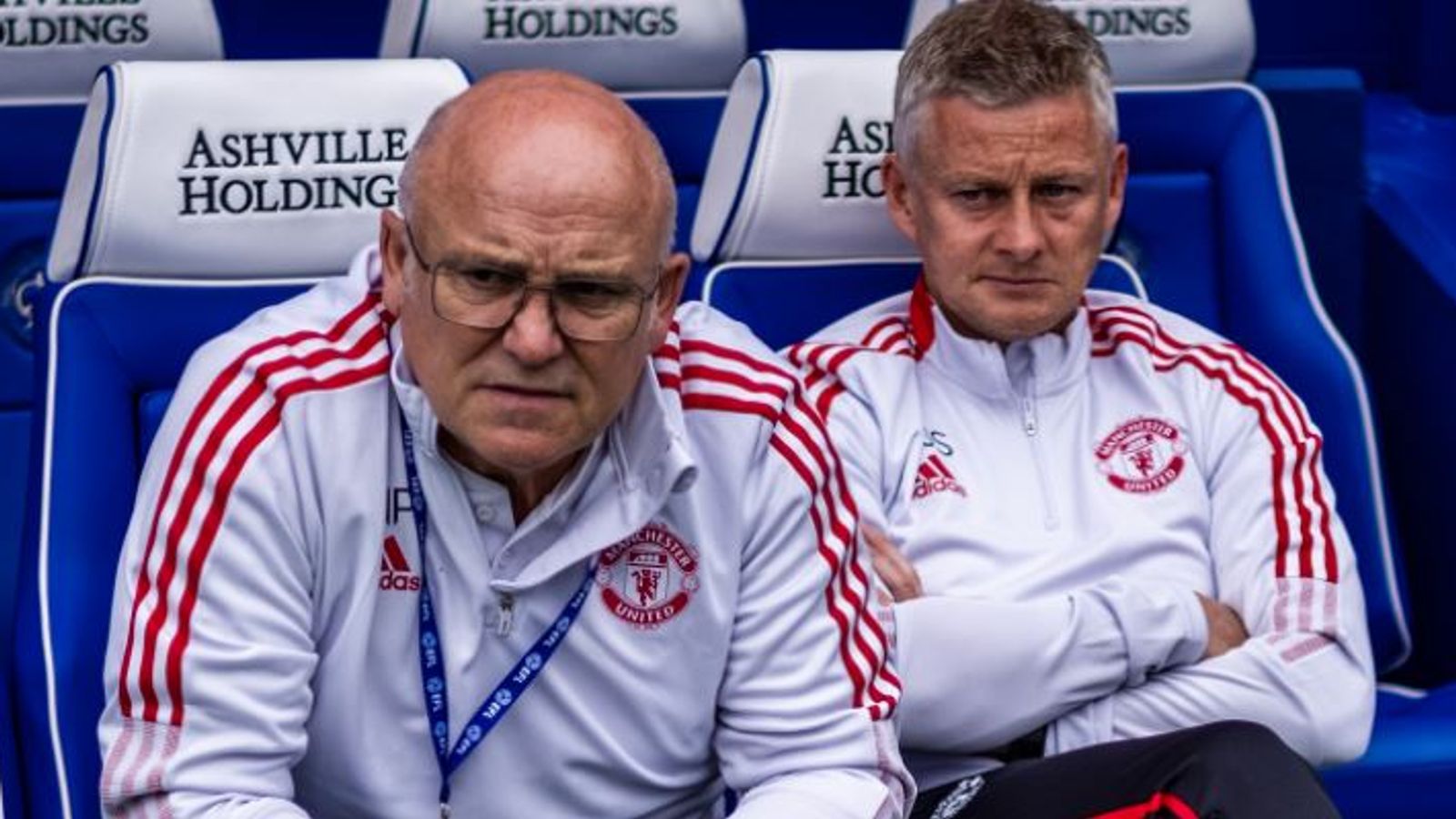 Mike Phelan returned to Manchester United when Ole Gunnar Solskjaer was initially appointed caretaker manager in December 2018; the 59-year-old, who made 146 appearances for the club as a player, was also Sir Alex Ferguson’s assistant at Old Trafford

Manchester United assistant manager Mike Phelan has extended his contract with the club until 2024.

The former United midfielder was also an assistant for Sir Alex Ferguson at Old Trafford, and returned to the club when Ole Gunnar Solskjaer was initially appointed caretaker manager in December 2018.

Phelan’s new deal expires at the same time as Solskjaer’s, with the Norwegian signing a new contract in the summer, although the United boss also has the option of a further year.

As a player, Phelan made 146 appearances for United after signing from Norwich City in 1989, playing a part in Sir Alex’s first trophy-winning team, with honours including the 1990 FA Cup, 1991 European Cup Winners’ Cup and 1993 Premier League title.

Phelan moved to West Brom in 1994 and retired a year later, taking up a variety of assistant manager roles before returning to United as the reserves manager in 2000.

He was Sir Alex’s assistant from 2008 to 2013, and although initially a first-team coach when Solskjaer was appointed in 2018, he was moved to his current role in May 2019.

Solskjaer is currently under pressure at United having most recently drawn with Everton 1-1 at Old Trafford on Saturday.

Ronaldo, who did not start the match, was captured marching alone down the tunnel at full-time, seemingly muttering in frustration.

“What is he saying? Who is he annoyed with? It can only come back to the manager,” Neville said. “Cristiano is not always going to score and he maybe can’t play every game. But if he’s going to walk off like that, it’s going to put immense pressure on Ole Gunnar Solskjaer.”

Ole Gunnar Solskjaer has been urged to “upset some players” if he wants to make his Manchester United tenure a success.

The Norwegian is into his third full season as Red Devils manager and is under pressure to deliver a trophy.

Last term’s second-place finish and run to the Europa League final has set the standard and the current crop of stars must now go one better.

Jadon Sancho, Raphael Varane and Cristiano Ronaldo have all been added, which has served to heighten expectations.

Getting the best out of Ronaldo will be crucial for Solskjaer, who is trying to keep a squad of stars happy.

That has proved a tough task thus far with United’s performances leaving a lot to be desired as he continues to shuffle his pack.

Solskjaer has seen his side lose three of their last six games, with a Carabao Cup exit among their defeats.

Gary Neville has said “the best players don’t make the best teams” and told his former teammate that getting the right blend of talent and work rate will be key.

The likes of Paul Pogba, Mason Greenwood and Bruno Fernandes are all eyeing regular roles, as is new boy Sancho.

Marcus Rashford is edging towards a return from injury which will increase Solskjaer’s options.

Fringe players like Jesse Lingard and Donny van de Beek also need to be managed as their futures continue to be in the spotlight.

“Cristiano Ronaldo needs players around him who are going to work really hard around him defensively,” he said on the Gary Neville Podcast.

“That was the same in 2008 by the way. Ji-Sung Park, Darren Fletcher, Owen Hargreaves, Carlos Tevez and Wayne Rooney all worked like trojans to make up for Cristiano.

“I watched the game (against Everton ) and I was thinking, if Cristiano is playing you’ve got to put players around him who are going to forgive the fact that he isn’t going to press from the front, he isn’t going to run hard. You’re almost carrying a player out of possession.

“You forgive that because of his greatness and ability to win games.

“My view would be to pick a group of players around Ronaldo, whether that’s (Edinson) Cavani, who can play up top.

“Like Jesse Lingard and players like that. We had Ji-Sung Park years ago. The best players don’t make the best team.

“You need soldiers alongside the generals you’ve got. United have got a lot of generals, but unless they work hard they ain’t going to win anything.

“Ole might have to upset some players that have got nice price tags and lovely reputations and look lovely on the team sheet.”

The summer signing has failed to deliver so far at Old Trafford.

With so much competition for places he can only afford to underperform so many times, despite Solskjaer’s staunch defence of his talent.

However, Sancho may have to prove that he has the appetite to work off the ball and be a foil to Ronaldo if he wants to be a regular starter.

Coupled with that, he will need to start delivering in the final third with goals and assists, something he is yet to do.

Mason Greenwood
United’s academy graduate is hailed as the club’s best finisher and begun the season with three goals in as many games.

Solskjaer and England boss Gareth Southgate are keen to carefully manage the youngster, who is tipped for big things.

Greenwood is on a steep learning curve and how he tracks back and does a job for the team may be his next lesson.

Especially playing in a wide area, the 20-year-old will have to show he can help his full-back when United are out of possession.

Paul Pogba
Pogba has copped criticism throughout his United career having been signed as a midfielder.

Solskjaer has opted to play the Frenchman in a wide left role which allows him to affect the game in attack, but relieves him of defensive duties he would have to do in the middle of the park.

Pogba is already having to fend off competition for a start in wide areas and may have to adapt his game as he plays alongside Ronaldo.

United can ill afford to have more than one player who is reluctant to press from the front and track back meaning the onus will be on Pogba to adapt if Solskjaer does demand more.

Donny van de Beek
The Dutchman is yet to play in the Premier League this season with Solskjaer having to address his lack of minutes.

There is little evidence to suggest he will or won’t do work off the ball because the former Ajax man has never been given a run of games to show what he is capable of over a sustained period.

The No 10 role looks to be closed off with Fernandes the team’s talisman.

If Solskjaer does demand more work rate from his players Van de Beek may well get the chance to prove he can excel, but that remains to be seen.

Anthony Martial
The forward has never been renowned for his effort in defence.

Already Martial is having to prove his worth, which is why his goal against Everton at the weekend was timely.

The Frenchman was linked with a move away from Old Trafford in the summer and faces a tough task to make himself a regular.

Solskjaer continues to back Martial in public but sooner or later he will have to make a choice on who complements the likes of Ronaldo and Fernandes, who are the only two players set to play the majority of games.