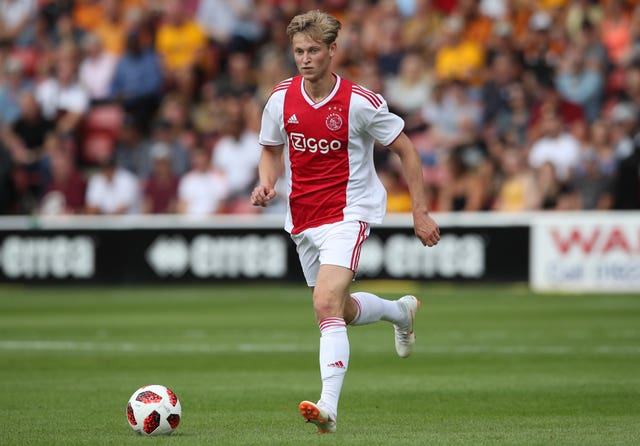 Manchester United have made headway in negotiations with Barcelona over key summer target Frenkie de Jong and are attempting to sign Feyenoord left-back Tyrell Malacia.

A summer rebuild is required after a wretched season, but the Old Trafford giants failed to bring in any new faces by the time Erik ten Hag kicked off pre-season training on Monday.

Ten Hag coached De Jong at Ajax and the PA news agency understands United have made positive progress in talks with Barcelona.

There remains issues to iron out if De Jong is to move to the Premier League, but a deal of around 65million euros (£56million) plus add-ons has been lined up.

Malacia is represented by the same agency as his fellow Dutchman and may also be heading to Old Trafford.

A switch to Ligue 1 side Lyon appeared to on the cards for Malacia before United made their move for the left-back.

Feyenoord news platform 1908.nl have reported club sporting director Frank Arnesen told them: “The agreement is there. We are now waiting for Tyrell.

“If he says yes, then a transfer to Manchester United is imminent.”

Meanwhile, United teenager Zidane Iqbal has signed a new and improved deal at the club.

The Mancunian of Iraqi and Pakistani heritage made his debut in December’s Champions League match against Young Boys and has signed a deal until June 2025, with the option of a further year.

“Delighted to have extended my stay at this wonderful club,” 19-year-old Iqbal posted on Twitter. “Alhamdulillah.”