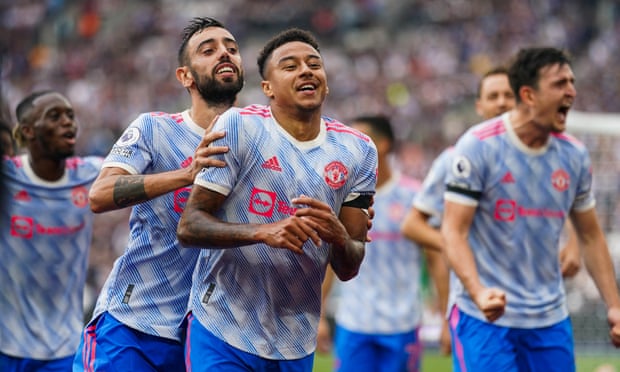 Mark Noble was offered one shot and it was of the kind that, throughout his career, he has dispatched with chilling reliability. A handball from Luke Shaw had offered West Ham the chance to salvage a draw during an extraordinary finale and, in fairness to David Moyes, he thought he was on to a sure thing. Noble had taken 42 penalties since turning professional and missed just four; in fact he had not fluffed his lines since 2016. So Moyes turned to his one-man cavalry and, barely breaking stride, Noble jogged from the substitutes’ bench to the spot.

By coincidence, David de Gea had not repelled a penalty for nearly five and a half years. But perhaps this pile‑up of encouraging statistics, coupled with the self-consciously dramatic act of loading the fate of an entire afternoon on a player’s only kick of the game, tilted the odds another way.

There was certainly the sense, as Noble took aim deep into added time, that this might not end well: it was borne out with a poorly-struck shot, too close to De Gea, that was batted away to the keeper’s left and proved the final act.

Declan Rice had expected to assume responsibility before Noble was sent out on his mercy dash, Ole Gunnar Solskjær observing that once he saw the new taker’s identity he had resigned himself to a point. It was tempting to conclude Moyes had overthought the situation but he offered no regrets.

“Not at all, because Mark Noble is one of the best penalty takers we’ve got,” he said. “We had time to think about it, time to make the choice. I’d have been more disappointed with myself if I hadn’t taken the decision. Because of his record I felt he’d be most suited to take it.”

Moyes admitted England’s failure after sending players on cold in the Euro 2020 final had crossed his mind, but ultimately he was spooked by his team’s patchy record from 12 yards. Rice was one of two players who missed a penalty for them last season; the other was Jesse Lingard and, as if the Noble twist had not been cruel enough, it was compounded by the fact that West Ham’s former loanee was now guaranteed to be the matchwinner.

Lingard had been warmly applauded by his former public when he replaced Paul Pogba 17 minutes from time as Solskjær attempted to unlock a game that, tied at 1-1, had meandered. Covid-19 meant West Ham’s support had caught the merest in-person glimpse of Lingard’s half-season spell here, which brought nine goals in a thrilling renaissance for the 28-year-old.

Now they were given a precis: receiving possession from Nemanja Matic, he turned inside Kurt Zouma before lasering a vicious finish into Lukasz Fabianski’s top left corner. He offered the obligatory non-celebration and with a minute of regulation time left the game appeared to have been won.

Had Noble not then erred, Lingard’s reticence might have appeared wise. But the outcome was secured and Solskjær could enjoy his player’s contribution, particularly as Lingard’s sloppy backpass had caused their midweek defeat to Young Boys. “Jesse was quite clear he wanted to fight for his place and be part of a United team he thinks is going places,” he said. “I’m so happy and pleased for him. He’s becoming a grown man and he’s a very good player.”

Solskjær confirmed Lingard will start on Wednesday, when these sides meet again in the League Cup. Those who began ahead of him here had taken time to warm up, coming close when Fabianski brilliantly tipped Bruno Fernandes’ half-volley on to the post but deserving to fall behind on the half-hour. West Ham had posed most of the questions and struck when, after a slick combination between Vladimir Coufal and Jarrod Bowen, space opened up for Saïd Benrahma to shoot from range. His effort, aimed towards the far corner, cannoned off Raphaël Varane’s elbow and nestled in the opposite side of the net.

Until that point Cristiano Ronaldo had been subdued, trying and failing to escape his markers and attack a succession of crosses. Then Fernandes delivered an accurate one and Ronaldo, just onside after drifting beyond Aaron Cresswell, beat Fabianski at the second attempt. His four goals since returning to United have all been scruffy, not that such trifles ever weigh heavily.

Ronaldo was denied by Fabianski after half-time and later had three penalty claims of varying extravagance turned down, of which Solskjær thought two were valid. The late award to West Ham, given after Martin Atkinson used the pitchside monitor to reverse his initial refusal, was more consequential and there were contrasting views over the eventual serving of justice.

I felt we deserved the win, we played some very good football and created big chances,” said Solskjær, although their momentum had slowed before the winner and West Ham, fewer than 72 hours after facing Dinamo Zagreb in Croatia, seemed worthy of a point.

For Moyes, that was the silver lining. “We’ve tried to go toe to toe with Man United today as much as we could and made a decent account of ourselves,” he said. They were one ill-fated roll of the dice from being inseparable.