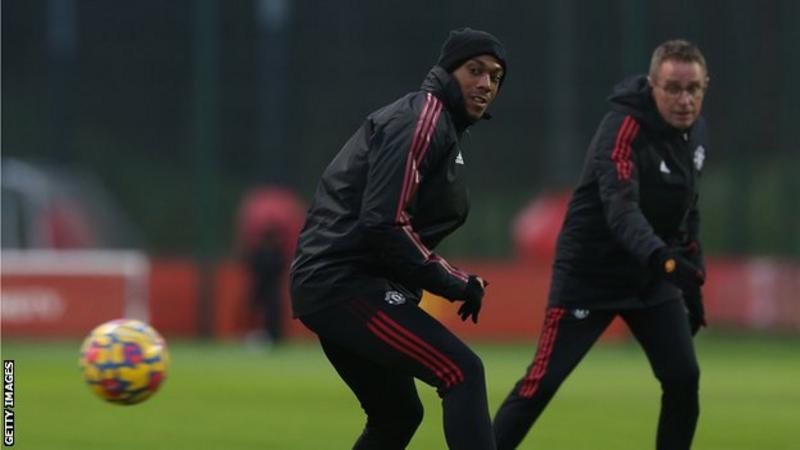 Rangnick had said Martial “didn’t want to be in the squad” for Saturday’s game against Aston Villa.

Martial, 26, responded on Instagram by saying he “will never refuse to play a match for Man United”.

“I had a conversation with him on Sunday,” said Rangnick on Tuesday. “The matter is now resolved.”

United had two goalkeepers among their eight substitutes – which is one short of the number allowed – for the 2-2 draw at Villa Park.

Rangnick, who is preparing his team for Wednesday’s Premier League game at Brentford, refused to be drawn on the player’s long-term future.

“I mean, I’m here now for six weeks,” he said “All the things that needed to be said, I said after the press conference.

“He didn’t train yesterday and the day before yesterday. He will probably train today and after training I will then take the decision if he is nominated or not [for the squad]. Let’s see what will happen there.”

Cristiano Ronaldo and Marcus Rashford are both in contention after missing Saturday’s game but France midfielder Paul Pogba is not yet ready to play, despite returning to training after a groin injury in November.

The 28-year-old midfielder was not expected to return to training until the end of the month but posted a picture of himself alongside Ronaldo and Rashford on Monday.

“Paul Pogba had his first day of training with the whole group yesterday and in the first training session he showed what kind of an extraordinary player he could be,” said Rangnick.

“He will not be available for the two games this week but hopefully after the international break – when we have the cup game against Middlesbrough and the away game at Burnley – I think he could be an option.”

Pogba’s deal ends this summer but Rangnick does not know what stage talks over a new contract are at.

“I don’t know,” added the German. “I cannot answer because it’s not me dealing with this. I’m not negotiating about future contracts with players.

“But what you could see from his very first day in training yesterday is that he’s present – he’s physically present, he’s mentally present.

“What I saw in training yesterday was very promising for the future and I’m very much looking forward to having him available in two weeks’ time after the international break. I think he will be a serious candidate also for the first 11.”