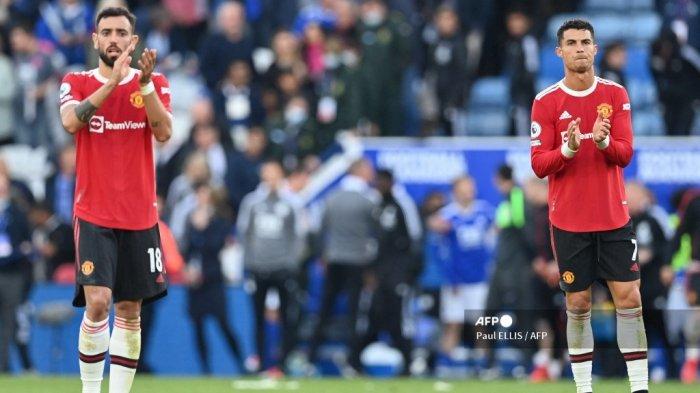 He’s clearly biased, but according to his agent Jorge Mendes, Cristiano Ronaldo deserves to win the 2021 FIFA Ballon d’Or. It would be the sixth player of the year award of his career and put him on par with Lionel Messi for most all-time.

Messi, Robert Lewandowski and Jorginho are some of the names discussed as potential winners though a groundswell of support is building for Liverpool’s Mohamed Salah based on his recent form.

Mendes feels he has done more than enough to win it despite ending last season with just one trophy to his name: the 2021 Italian Coppa Italia.

“The figures and statistics linked to the name of Cristiano Ronaldo speak for him and should be enough in my opinion for him to win another Ballon d’Or,” Mendes told France Football. “The absolutely remarkable total of 115 goals for the Portuguese national team makes him the record holder in the history of men’s international football. This year he broke this 15-year-old record, to which he can add that to being the top scorer in the history of professional football.

“All these achievements, which represent the greatest performance in football history, should be decisive in the awarding of the trophy, as he continues to demonstrate that he is, without a doubt, the best football player in the world of all time.”

The fact that Ronaldo finished as the top scorer in both the Italian Serie A (29 goals in 2020-21) and the 2021 European Championship (five goals) are other relevant credentials, but Mendes feels that his overall records should come into play.

Ronaldo has scored 115 times for Portugal to become the highest-scoring player in men’s international football and during the October international break he became the first player to score 10 hat-tricks at the international level in a 5-0 win against Luxembourg.

“He holds the record for goals in the Champions League and he is the only player in the world to have won everything in three different countries with the maximum competitiveness, as was the case in England, Italy and Spain.

“All this at the age of 36, with absolutely unique consistency, commitment and a phenomenal ability to overcome difficulties. In my opinion, this year the Ballon d’Or has a name: Cristiano Ronaldo. For me, he has never deserved it so much.”

Since his return to Manchester United, Ronaldo has also scored five times in seven matches across the Premier League and Champions League.

Lewandowski has been touted as one of the favourites to win the award due to his exploits for Bayern Munich last season. He finished last season with 41 goals in the Bundesliga from just 29 matches, while he also netted five across six Champions League appearances.

This season, the Poland international has 11 goals from nine games in the Bundesliga and Champions League.

Chelsea star Jorginho has also been highlighted as a top contender after playing a crucial role in his side’s Champions League-winning campaign and Italy’s Euro 2021 championship run.

Despite having a disappointing season with Barcelona, Messi is in the frame, having won his first major international trophy with Argentina as they won the Copa America this summer. Similar to Ronaldo, he won the Spanish domestic cup, the Copa del Rey.

After leading Argentina to a Copa America win and Barcelona to another Copa del Rey, Lionel Messi has looked like the favorite to win this year’s Ballon d’Or. While 2020 Ballon d’Or winner, Robert Lewandowski, placed the Football world on notice once more after scoring 5o goals and contributing 8 assists this year along with another Bundesliga title and wins in the Club World Cup and the DFL-Supercup.Chelsea’s Jorginho also seems to be in the mix after winning the Euro 2020 with Italy and the UEFA Champions League and Super Cup with Chelsea.

However, after not being heavily favored among the likes of Messi, Lewandowski, and Jorginho, Ronaldo was questioned on who he thought should win this year’s most prestigious Football award — the Manchester United forward quickly gave a definitive answer.

The Manchester United star isn’t wrong — Karim Benzema has been on a tear this season with 9 goals and 7 assists in only 8 games played for Real Madrid — he is certainly making a strong case for Ballon d’Or — but his recent form might just be a little too late for him to snag the prestigious award away from the favorites.

Manchester United lost to Leicester City with a pretty big score, which is 4-2.

Manchester United actually came to Leicester’s headquarters with a mission to improve the team’s performance that had fallen in the last few matches.

However, the game of Ole Gunnar Solskjaer’s team has not shown an improvement after the international break.

The defeat suffered by the Red Devils also ended their own 29-match unbeaten away run.

In addition, they also have to give up their position on the Premier League standings by a coup by the Brighton club.

Their position could be even worse if Everton and Tottenham win three points in the Premier League match tonight.

The defeat also left a mark on Cristiano Ronaldo’s mind.

Ronaldo, who struggled since the early minutes of the game, seemed to have not received an adequate supply of the ball.

Whereas the front line of the Red Devils is inhabited by first-class players.

However, Solskjaer seems to have not been able to maximize the role of his star players.

The defeats and draws that approached United were increasingly mounting.

Cristiano Ronaldo looks disappointed and fed up with the defeat suffered at home to Leicester City last night.

Quoted from talkSPORT, the Portuguese superstar plans to immediately run to the locker room when the referee blows the long whistle.

He initially did not follow his colleagues who gave applause and appreciation to the supporters who came.

Coach Ole Gunnar Solskjaer seems to be aware of that.

He then approached CR7 and prevented him from going straight to the locker room.

Manchester United itself had to give up with a score of 4-2 over Leicester City.

Cristiano Ronaldo is claimed to be disappointed with the decision of his coach at Manchester United, Ole Gunnar Solskjaer.

The following is the latest fate of Solskjaer after the defeat to Leicester City which is available in this article.

This is the first time he has been a substitute since returning to the Red Devils.

Because of the draw against Everton and not being able to score, Ronaldo looked annoyed after the final whistle sounded.

Solskjaer argued that the decision was taken in order to maintain the fitness of the players because the competition was still long.

However, the skipper’s reasons could not erase Ronaldo’s disappointment.

“Ronaldo is very disappointed to be on the bench,” said an internal Manchester United source as quoted by The Sun.

“Ole thought Ronaldo was tired after the game against Villarreal. So he decided to field Ronaldo at the start of the first half.”

“However, Ronaldo will tell Solskjaer when he is fit and ready to play. He wants to appear in every league game,” said a similar source.

In the last match against Leicester City, Saturday (10/16/2021), Ronaldo returned to the starting line-up for Manchester United.

However, he was unable to prevent his team from losing 2-4.

This is the fate of Manchester United coach, Ole Gunnar Solskjaer, after the defeat to Leicester City.

Manchester United travels to Leicester City headquarters in the 8th week of the 2021-2022 Premier League at the King Power Stadium, Saturday (16/10/2021) night WIB.

As a result, Man United lost 2-4 to Leicester City.

They managed to open the scoring first through Mason Greenwood’s goal in the 19th minute.

However, after that Man United’s game actually declined.

As a result, the Red Devils conceded 2 goals through Youri Tielemans (31′) and Caglar Soyuncu (78′).

The position became as strong as 2-2 after Man United replied via Marcus Rashford’s goal (82′).

However, the home team ended up adding two more goals through Jamie Vardy (83′) and Patson Daka (90+1′).

Many thought the humiliating result was enough for Man United’s management to sack Ole Gunnar Solskjaer.

In fact, the Ole Out hashtag continues to resonate on social media.

However, what happened was the opposite.

According to a report from The Athletic, Man United officials continue to provide 100 percent support to Solskjaer.

That is, the future of the Norwegian coach is certainly still safe.

Man United haven’t won in the Premier League since mid-September 2021.