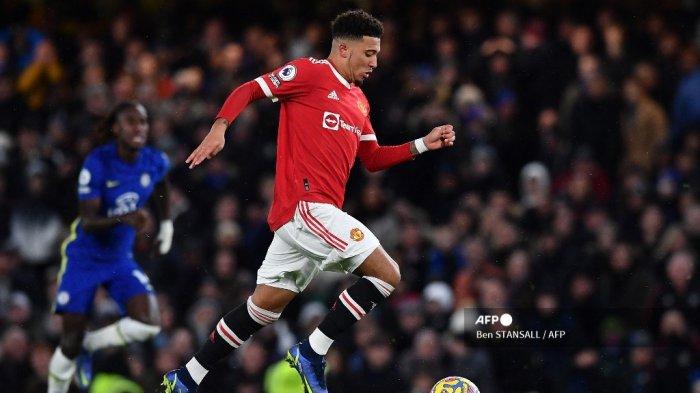 Many surprises happened, in a one-sided match, between Chelsea and Manchester United in the Premier League, last night.

A 1-1 draw does not describe the game for 90 minutes: Chelsea was far more dominant than United, even in the 45 minutes of the first half, the Blues had many chances to win.

Jorginho’s error early in the second half was also quite surprising, an anticipatory error that Jadon Sancho put to good use to put the visitors ahead.

Manchester United also made a surprise, by playing three defensive midfielders at once, Matic-Fred-Scott McTominay was introduced since the early minutes of the match.

The decline of these three midfielders sacrificed one important figure who became the backbone of Manchester United: Cristiano Ronaldo, who sat on the bench.

The mobility of the Manchester United striker, not only offers strength from the attacking side, but is very helpful when the Red Devils defend tightly.

Rashford-Bruno-Sancho, going straight for the ball when he lost the ball, made it difficult for Chelsea in the first half, although the Blues eventually found space in Aaron wan-Bissaka’s side.

Statistics illustrate how the effectiveness of the three strikers from Manchester United, is going very well.

Interestingly, Fred, Bruno Fernandes and Alex Telles, became the three players who won possession of the ball, although not separated from the role of Sancho and Rashford.

Jadon Sancho’s goal, also part of the benefits of a mobile striker, the pressure that Rashford and Sancho put on Jorginho, was enough to influence the mistakes the Italian midfielder made in clearing the ball.

The presence of Cristiano Ronaldo in the 64th minute, also made United lose pressing, and had quite a fatal result, because they actually failed to maintain a scheme that worked well in the first half.

Ronaldo, on the one hand, was also not very happy with sitting on the bench, evidently, the Portuguese superstar was the first player to enter the dressing room, not even shaking hands with Michael Carrick.

Carrick, too, was not wrong to reserve Ronaldo, and his post-match explanation was quite acceptable and did work in this match.

“We came here with a plan, I knew how Chelsea were going to play and we wanted to stop their short passes through Jorginho and (Ruben) Loftus-Cheek in the middle of the pitch,” Carrick told Sky Sports.

“We are aware of that. Then a bit of freshness for the team, two or three changes, some tactical adjustments, that’s what we decided and we almost did.” Carrick concluded.

This approach to substituting Cristiano Ronaldo, is also very possible in the era of Ralf Rangnick, given that the German is very obedient with pressing play.

This pressing game, not only got rid of Cristiano Ronaldo on the bench, however, the midfield trio as shown by Carrick in the match against Chelsea became the solution.

There is much speculation that Darren Fletcher, getting a call from Ralf Rangnick, confirmed by Sky Sports, was not a call from this German.

However, it is natural for the public to think that Fletcher got a call from Rangnick, because shortly after, Fletcher asked Aaron wan Bissaka to step up and help press when United lost the ball.

And Fletcher was much more of an assistant coach than a Technical Director, being the most vocal on the touchline, even arguing with Thomas Tuchel, who was shown a yellow card in this game for violent protests.

Fletcher, will likely play a similar role under Rangnick, and of course, it will be interesting to see how Rangnick adapts his approach at Manchester United.

Interestingly, after the match against Chelsea, Eric Bailly was interviewed by one of the French media, and said that all Manchester United players already knew who would be their manager at the end of the season.

And the surprises for Manchester United, still continue.

Manchester United’s players returned to training after their hard-fought weekend draw at Chelsea, with a quick turnaround ahead of Thursday’s Premier League meeting with Arsenal.

The match will be their third under caretaker manager Michael Carrick, with Ralf Rangnick confirmed as incoming interim manager but still waiting on the resolution of visa issues before he is able to take charge,

Carrick faces some big selection decisions, with Harry Maguire available again after serving a one-match ban and Cristiano Ronaldo pushing for a start after being named among the substitutes at Stamford Bridge.

Ronaldo was among the players spotted heading into the training ground, while United fans will be buoyed by the sight of Raphael Varane as the defender continues his recovery from injury.

“Ralf Rangnick was announced as interim manager on Monday but, while the club follows the regulatory process around a work visa, [Michael] Carrick will continue at the helm,” a statement from United on Tuesday read.

“Michael has communicated this to players and staff at Carrington in a busy week for the club.”

Carrick has avoided defeat in his first two games, with Ronaldo opening the scoring in a 2-0 win at Villarreal before Jadon Sancho’s goal was only enough for a point on Sunday.

Carrick opted for a more conservative approach on Sunday, with a midfield three of Fred, Nemanja Matic and Scott McTominay.

The approach looked to have paid off when Sancho struck first, only for Jorginho to level from the penalty spot.

Former United midfielder Paul Scholes has suggested one of the midfield trio could drop out if Ronaldo is recalled, though Marcus Rashford could also make way after being withdrawn for the closing stages against Chelsea.

United have been without Luke Shaw for both of Carrick’s games, with the left-back suffering from concussion, though he could be in contention to return.

In the England defender’s absence, Alex Telles has deputised on the left of the back four, and it is yet to be determined whether the Brazilian has done enough in the last two games to justify a prolonged run in the first-team.

Another man brought in from the cold by Carrick after a spell on the fringes is Donny van de Beek, who started the win at Villarreal after scoring in Solskjaer’s final game in charge.

The former Ajax midfielder made a late cameo at Chelsea on Sunday, replacing Bruno Fernandes for the closing moments, and has earned praise from the caretaker manager for his versatility.

However, with Ronaldo pushing for a recall and Mason Greenwood also available again after a positive Covid test, Van de Beek may have to wait.

French defender Varane has spent close to a month on the sidelines after leaving the field early in United’s 2-2 draw with Atalanta, but fans will hope the sight of him en route to training means a comeback is not too far away.

United’s last Premier League victory, away to Tottenham at the end of October, came with the former Real Madrid man in the starting line-up.

Jamie Carragher suggested all of United’s players will be on audition for Rangnick, who will hope to take over in time for Sunday’s game at home to Crystal Palace.

United can close to within two points of Arsenal with a victory on Thursday night, though they lost at home to the Gunners last season.

Another defeat at Old Trafford would leave the Red Devils eight points outside the Champions League places and facing an uphill battle when Rangnick begins his stint in charge.