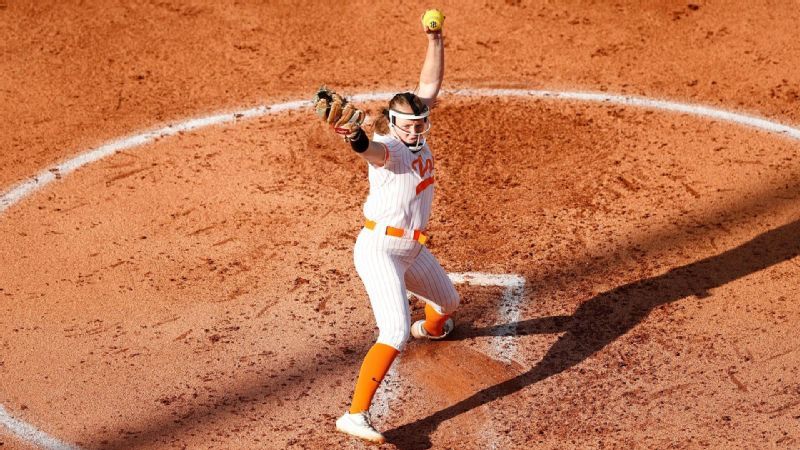 McCachren was credited with the win, improving her record to 5-2 on the season, and dealt a career-high tying four strikeouts without allowing any runs or hits. Lady Vol starter Ryleigh White started the game and added four strikeouts to her season tally.

Junior outfielder Kiki Milloy blasted her 11th home run of the season and drove in a game-high four RBIs on the night, pushing her RBI total to 31 on the year. Freshman left fielder Lair Beautae went 2-for-3, drove in two runs, and homered for the fourth time this year, while rookie infielder McKenna Gibson had a two-hit outing that included her fifth bomb of the season.

Tennessee (23-9, 5-3 SEC) gained an early 1-0 lead in the bottom of the first with some savvy baserunning. With runner on the corners, Zaida Puni took off for second to record her first-career steal, which allowed Beautae to advance home from third to give the Lady Vols a one-run edge.

Lipscomb (13-19, 3-3 ASUN) recorded their only hit, a two-run homer, in the top of the second. Freshman Elise Shewmaker was hit by a pitch before left fielder Maci Cunconan brought her home with a two-run shot over center field, giving the Bisons a 2-1 lead.

In the bottom of the second, Tennessee proved they too can hit the long ball. Gibson blasted her fifth homer of the season with a solo, two-out blast over left center leveling the score at two.

The Lady Vols kicked off the bottom of the third with some fireworks. Milloy and Beautae got the show started with back-to-back solo shots to lead off the inning, Puni singled to third, and Rylie West ripped a double to right-center to bring Puni home and make the score 5-2 after three innings.

In the bottom of the fourth, Milloy walked, stole second, and Beautae brought her home with a single to right, recording her second RBI of the game as the Lady Vols took a 6-2 lead.

Super senior Ashley Morgan placed her name in the Tennessee records when she was hit by a pitch in the bottom of the fifth. She moved into a tie for first place with former Lady Vol Chelsea Seggern (2017-21) for the most career HBP in program history.

After Morgan’s leadoff HBP, Tennessee loaded the bases on Gibson’s single and a walk drawn by pinch hitter Amanda Curran. Milloy brought them all home, clearing the bases with a three-run double to right-center to put the Lady Vols ahead 9-2.

McCachren kept the Bisons at bay in the sixth and seventh innings to secure the midweek win. A pop-up by Lipscomb junior Meghan Kline was secured in the glove of shortstop Ivy Davis to ice the 9-2 victory.

With the win, Tennessee improves its all-time record against in-state foes to 140-4. The Lady Vols have outscored teams from the state of Tennessee 37-8 this season.

UP NEXT: The Lady Vols will welcome the Mississippi State Bulldogs for a three-game series running Friday to Sunday, April 1-3. The series opener starts at 6 p.m. Friday while Saturday’s first pitch is scheduled for 2 p.m., and Sunday’s game will begin at noon. The first two games can be streamed on SEC Network+, while the game on Sunday will be televised on SEC Network.