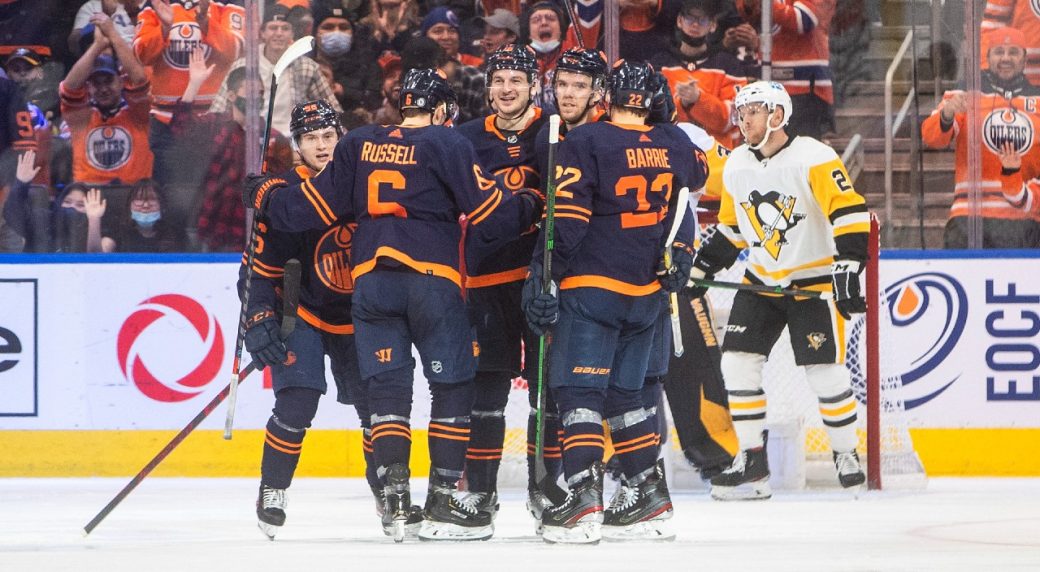 EDMONTON — It was billed as Sidney Crosby versus Connor McDavid. And let’s face it: it will always be that way when Edmonton and Pittsburgh meet, until the day Sid hangs ‘em up.

But as the game wore on the fight — with Crosby’s season parsed by a recovery from wrist surgery and a bout with COVID-19 — just wasn’t a fair one.

On a night where Pittsburgh owned the opening 40 minutes — but Edmonton exploded in the final frame — so too did the 34-year-old Crosby fade as the game went on while McDavid, 24, turned it up as the teams skated out for the third period tied 2-2. The Penguins fairly dominated the opening 40 minutes, but Edmonton turned a 2-2 tie into a 5-2 win, needing only 20 dominant minutes to walk away with two points that put them atop the Western Conference at 16-5-0.

If points percentage is your thing, Edmonton’s .762 is officially the NHL’s best.

“It came down to working harder, which I know sounds cliché,” McDavid said. “They were bringing it to us in the second period and we needed to up our work ethic and get pucks to the net and good things happened.”

Of his four points Wednesday — McDavid had three assists and an empty net goal, going plus-five — half came in a third period where Edmonton simply pulled away from Pittsburgh, a long-time nemesis. Crosby closed the game with an assist and a surly minus-four, his energy seeming to fade just as McDavid’s went up a notch or two.

“He’s just so good at creating something from nothing,” Crosby marvelled of McDavid. “It’s like, there is not a lot of danger going on and all of a sudden he’s on a two-on-one or he’s got a fast break. It’s a pretty small margin for error and they get a couple of two-on-ones and execute them well. That’s kind of what it came down to.”

McDavid fed both Zach Hyman and Evan Bouchard on a pair of two-on-ones, and then gave Hyman a one-foot shot into an empty net that appeared to be his hat trick goal. As the hats rained down from the stands, however, the replay showed that Kailer Yamamoto had been offside, robbing Hyman of his first NHL hat trick.

On Sunday, Hyman had been invited to light the Menorah to celebrate the beginning of Chanukah in Edmonton. On Wednesday he lit up Penguins goalie Tristan Jarry, and could have had his hat trick again when he went in on a two-on-one with McDavid while Jarry was on the bench.

Alas, McDavid was forced to shoot. He felt like The Grinch afterwards.

“I almost feel guilty putting it into the net,” McDavid said. “But (Evan) Rodrigues kind of glued himself to Hyman and you have to put it away as well. I was obviously trying to get him the puck but just couldn’t find a way.”

“He had no chance to get it to me,” said Hyman, who has 11 goals in his first 21 games with his new team. “I told him, put it in, finish the game and we’ll get another one another time.”

Edmonton is in the midst of a blue line crisis, with defencemen Darnell Nurse (broken finger), Duncan Keith (back), Slater Koekkoek (ankle) and Cody Ceci (COVID-19) all out of the lineup.

That left No. 7 D-man Kris Russell, offensive specialist Tyson Barrie and rookie Evan Bouchard as the only regulars facing Crosby and the Pens, along with Bakersfield call-ups Philip Broberg, William Lagesson and Markus Niemelainen, who broke his NHL maiden Wednesday wearing jersey No. 80.

“Good and bad,” he said. “Hopefully we don’t have to do that every night.”

They gave Russell a handsome belt buckle before the game, commemorating his standing as the all-time NHL leader in shots blocked. Then they dropped the puck, and it was a rodeo in the Oilers zone for much of the opening 40 minutes.

“We can be better,” said Tippett, whose team is 4-1 since Nurse was injured. “We can be cleaner with the puck and harder on loose pucks. We were in the third, but I’d like to see it for 60 minutes.”

He was impressed with Hyman, whose dogged work ethic is really something to behold night after night. The mix of skill and determination is a coach’s dream — an on-ice example every night for the rest of the Oiler players.

“We should have a few of our players stop looking at the iPad and start looking at Hyman out there,” Tippett said. “He plays the game hard. We could use more guys like that.”