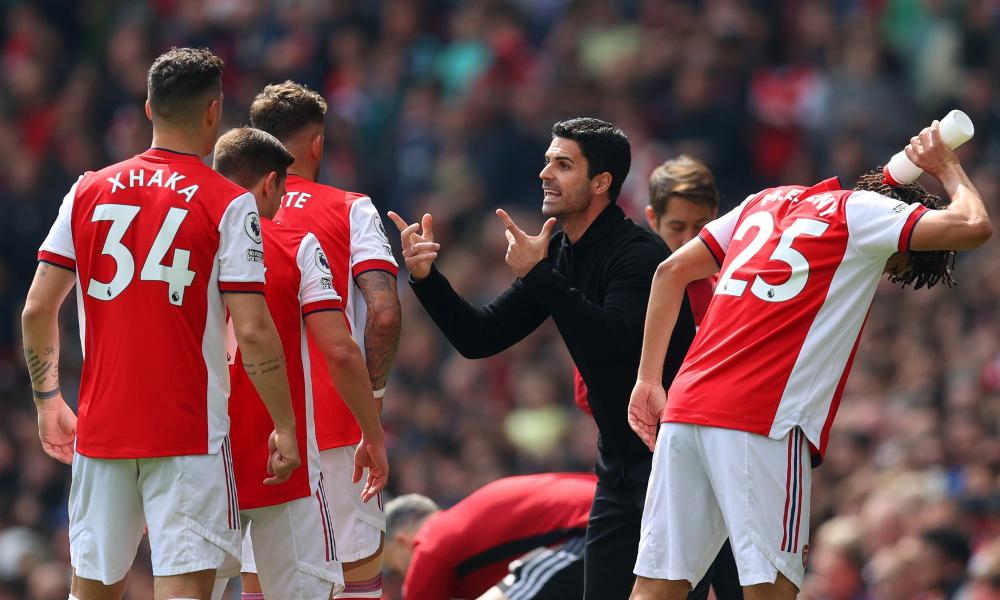 The question was met by a rolling of the eyes and an exaggerated shudder. Fun as Arsenal’s ultimately convincing win over Manchester United was, would Mikel Arteta sign up for five equivalent white-knuckle rides over the remainder of their run-in?

“Hopefully not,” he replied after the minor theatrics, which preempted his point, had subsided. “But the last games of the season tend to go a little bit like that, [because of] the fatigue of the players, the stress of different elements. It’s possible. So we have to handle that chaos as well if it happens.”

Arteta had described the United game, which was hardly a ringing endorsement of either side’s ability to place a steady hand on the tiller even if Arsenal were superior, as a “rollercoaster”. That has been one of the manager’s pet phrases: he used it as far back as February when predicting the nature of the chase for Champions League places and he has learned not to be too surprised when, within minutes of kick-off, the most carefully-laid plans become dust.

But it is not deployed with relish. Arteta, a touchline micromanager who would pre-ordain every one of his side’s movements if he could, has a natural aversion to disorder but knows his team must develop coping mechanisms for any loss of control. “It’s something that is part of our training, part of the plan we have in every game,” he said. “How we control a situation, how we take a situation into our favour. But in football a lot of things are unpredictable and we need to know how to react to them.”

Ideally, though, Arsenal would tread a far more stable path to elite European football. It is rarely sustainable to turn games into high-octane coin tosses over a lengthy stretch, even if you have enough quality to feel confident playing the odds. That is even more so when you are facing close rivals although West Ham, eight points and three places behind, have more or less been seen off in the top-four battle.

For Arsenal, what might once have seemed a knife-edge London derby now looks more like an occasion to assert authority and avoid doing anything stupid. Nobody gets an easy ride from David Moyes’s side, as his former mentee Arteta knows exceptionally well, but the prognosis looks favourable given the assignment West Ham face in Frankfurt on Thursday and the lung-busting efforts with which Declan Rice, Jarrod Bowen and company attempted to turn around their Europa League semi-final first leg until the very last.

Should results go their way this weekend, Arsenal will be guaranteed a top-six spot and effectively certain of a return to Europe in some form. On Friday, Arteta was swift to point out that their ambitions do not end there. A curious run, those topplings of United and Chelsea coming on the back of puzzling defeats to Crystal Palace, Brighton and Southampton, has ended with Arsenal just about holding pole position for fourth; they have veered up and down just as Arteta feared, although the demands placed upon his squad offer much of the reason.

At London Stadium, Arteta will almost certainly start with Mohamed Elneny in central midfield and Eddie Nketiah, whose two goals at Stamford Bridge may have placed a question mark above what had appeared a cut-and-dried summer exit, leading the line. Nuno Tavares, an entertainingly loose cannon who visibly exasperates Arteta at times, will continue at left-back.

At least he knows what he is getting from the first two: unflashy steadiness and security from Elneny; energy and an ability to snaffle scraps in around the six-yard box from Nketiah. Neither player had been particularly close to his Premier League starting XI until the past fortnight and both had to fill voids, created by injury in the middle and chronic bluntness at centre-forward. Elneny’s selection was intended as a measure to mitigate the absence of Thomas Partey, who is unlikely to play again this season and in whose presence Arsenal have a vastly more consistent record.

“The win rate when Thomas is there is higher and that is something that is not good for us,” Arteta said. He spoke of “using [alternatives] in a different way, changing formation and finding ways to compensate”. It is a fancy way of saying Arsenal have had to patch and mend, which is not a state of affairs conducive to maximum levels of control.

When Partey played alongside Granit Xhaka, usually combining with Martin Ødegaard further in front and receiving possession from Ben White behind, Arsenal looked a finely-tuned machine born of hours’ work on the training pitch and bundles of natural talent.

Kieran Tierney, whose injury meant Arteta was eventually persuaded to trust Tavares, would know intuitively when to surge forward and receive one of Partey’s raking passes. In Tavares’s case, nobody is quite sure what the next move will be, although a pretty important one was the opening goal against United. To improvise necessarily means to compromise; Arteta has been given little choice but to tolerate his stand-ins’ foibles, give himself up to a few of those late-season uncertainties and hope Arsenal can roll over the line.

If they capitalise on West Ham’s distractions and dominate as they would like at London Stadium, taking another win, they will edge closer to what had seemed an unthinkable turnaround in fortunes. Last March, Arsenal went three goals down at the same venue before salvaging a point and almost escaping with all of them; Arteta would be horrified at the idea of a repeat but must know by now that any celebrations in three weeks’ time will not have been earned the easy way.