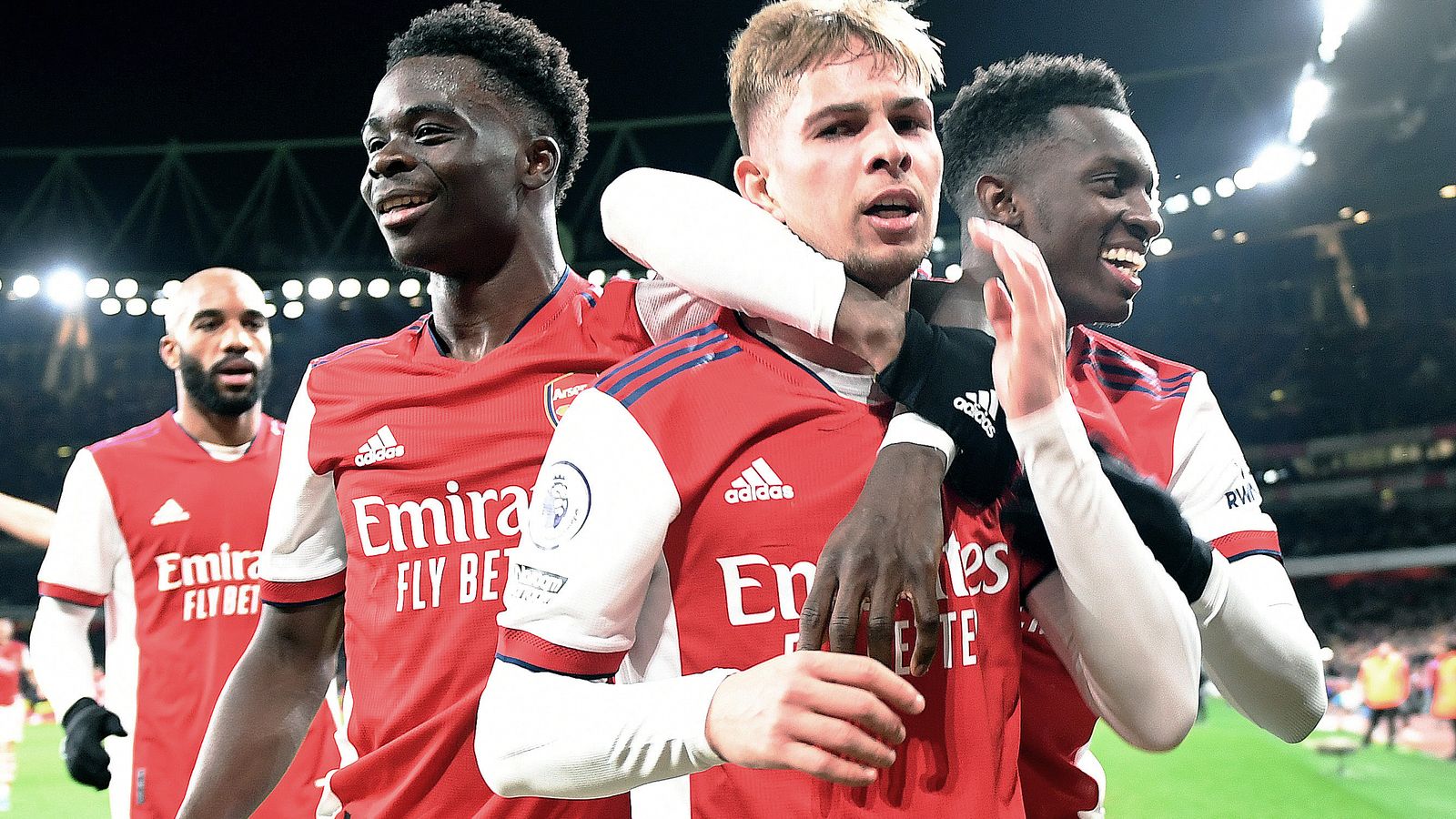 Arsenal’s youngsters shine as Gunners move into fourth spot; Mikel Arteta would not be drawn on any more debate around Pierre-Emerick Aubameyang; Gabon striker stripped of captaincy and wasn’t in squad in 2-0 win over West Ham

Mikel Arteta was left marvelling at the chemistry between Arsenal’s young stars after the 2-0 victory over West Ham moved them into fourth.

Arteta, who also refused to say whether ousted captain Pierre-Emerick Aubameyang would play in the next game against Leeds on Saturday, saw his side move into the Champions League spots for the first time this season thanks to goals from Gabriel Martinelli and Emile Smith Rowe.

Nearly a year ago, Arsenal were beaten 2-1 at Everton and sat just four points above the drop zone, before Arteta began introducing youngsters like Smith Rowe and man-of-the-match Bukayo Saka to the senior side. Despite “bumps along the way”, the Spaniard is delighted with the way his side have transformed, and praised the influence of senior players.

“I think [the young players] were really good, all of them, and the senior players led by example. We had some sound performances needed to beat this team. I am really pleased. It’s important for Gabi [Martinelli] to score a goal like he did today.

“It helps because they know each other, some of them are from the academy, and the chemistry is there. I really like the link and the senior players are contributing and really enjoy helping the boys raise.”

Ten of Arsenal’s 23 Premier League goals this season have been scored by players aged 21 or younger, the most by any team this season.

“They are really positive signs, but the way the team is playing, we have made progress, but there is still a lot to do. We had some bumps in the road, but we have learned a lot since then. We have had to stick together and have to stick together, the staff and the players.

“The biggest compliment is the way we have our crowd behind us. To see that chemistry is unique and I am so proud of that.

“The players play for the club, with the pride and energy that we all expect from them, I was really happy, the focus they had, to play the game and put in a good performance. We had to play really well to beat West Ham and I think we’ve done it.”

Arsenal are beginning to make the Emirates a fortress, winning eight of their last nine at home, but Arteta was keen to temper expectations with the season not yet at halfway.

“The league finishes in May. Obviously it’s much better than where we were, but we want to be higher. This league is absolutely ruthless. Tomorrow is different.

“We are building a project, and to build a project without the people we play for is impossible. They are the biggest pillar to the project. When they are with us and the team grabs that pillar, we can be really strong, so I am really pleased with that.”

Arteta had been ruthless in stripping Aubameyang of the captaincy and dropping him from the side for a disciplinary breach, but the Arsenal boss would not be drawn on any more debate around the Gabon striker.

“No news, no news,” he said in his post-match press conference, having told BT Sport: “We will talk about that another day. He wasn’t eligible for this game and this game is gone now.”

Despite missing a penalty, Alexandre Lacazette put in an impressive performance, and Arteta praised his leadership skills after the game, with the Frenchman looking set to take the armband having been Aubameyang’s vice-skipper.

“He’s the next in line, and he’s taken it the way everyone expected today, with pride and commitment and I’m really happy with the way he played.