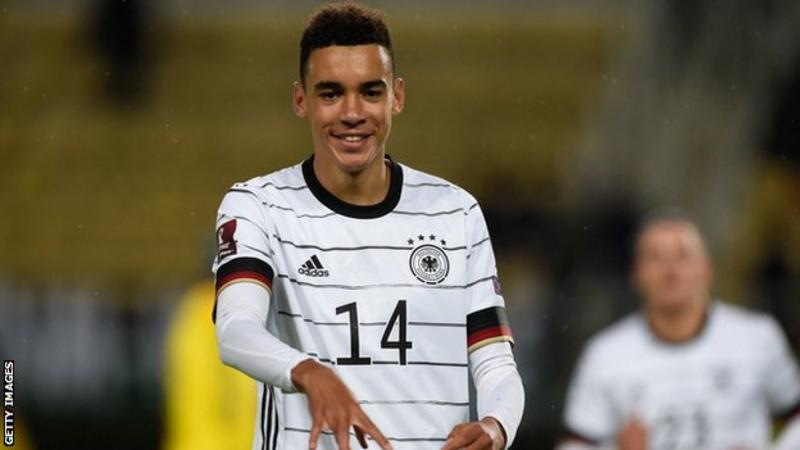 For an 18-year-old Jamal Musiala fit a lot into his career, he lived in two countries – both represented – won a title and now helped Germany to the World Cup.

The attacking midfielder was born in Germany, where his mother is from, but has a British father. At the age of seven, he moved to England and played for the Chelsea youth team – before returning home to join Bayern Munich.

He represented England from U15 to U21 (and Germany’s U16) before deciding to play for Germany’s senior national team – and to represent them at Euro 2020. He scored his first international goal on Monday when they defeated North Macedonia to qualify for the 2022 World Cup.

In his early years in England …

When I was young at home I would cry when I didn’t score.

My mother went to university in Southampton and we were there for four months. I tried Southampton for a while.

Chelsea was watching me do one of the games in Southampton and they offered me a trial and I was like, ‘Why shouldn’t I go to Chelsea?’

My mom asked me if I would like to play football in England because moving from Germany to England is a big step and I was really ready for it. I didn’t hesitate, I just wanted to play football.

I was kind of nervous. I didn’t speak the language very well. I learned English in about six months.

When returning to Germany …

Bayern Munich came up with a good plan for how I would gradually switch from age group to age group, but made sure that I wasn’t rushed. I just trusted what they said and went with it.

Now it just feels very comfortable. At first I was very nervous and if you just look at the [Star] players, yes, you see Robert Lewandowski regularly, that’s not normal!

And after a while it just becomes normal and I can tell that they are kind of my friends now.

When I first came in it was Thiago [who caught my eye during training]. His passing technique was just great to watch, but there are a lot of players. Lewandowski, that’s his finish and all that, or Joshua Kimmich’s technique. It’s all great!

My mom still drives me to training and also picks me up. It’s good. It’s chilled, but I’m working on my license. I should have it in the next few weeks.

About the representation of Germany instead of England …

Sometimes I don’t like to think about it because it’s a tough decision and sometimes it’s better to think about something other than just making the decision. At the end of the day I just thought about what’s best for me and where it feels most comfortable and just decided on Germany and you can’t look back.

Everything is going in the right direction. I feel like I made the right decision even though England made it to the final [Euro 2020]. I regret nothing.

I still have this love for England, my boys are there like Jude [Bellingham, his former English youth team-mate and current Borussia Dortmund midfielder]. I always wish Jude the best. And when England is doing well, I am happy.

About his friendship with Bellingham …

We are still in contact. We have always been good friends. At every England camp we were always in the same room, we were really close. It’s crazy to think about how far we’ve come and he’s doing well, scoring in the Champions League and playing in the European Championship too.

It’s nice, we change shirts after the games, it’s all friendly, but we still want to beat each other. It’s crazy because we used to play together in England as friends and now we have a bit of rivalry.

Before the game [against each other] we say ‘hello’ and all that and leave it at that so that we can both focus on the game and then talk again after the game so that everything is professional.