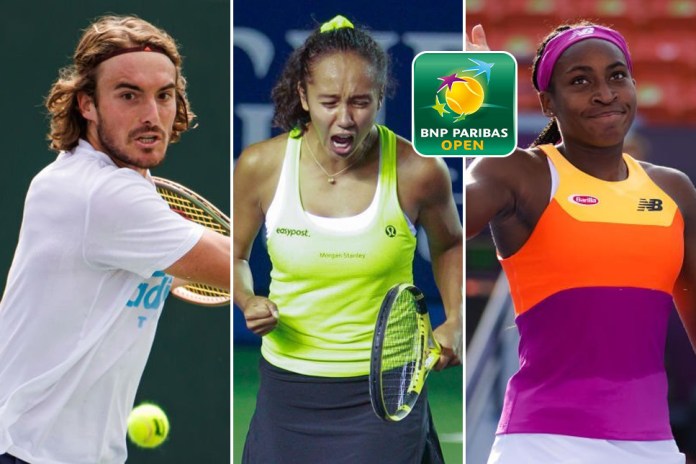 All matches kickstart 0.30 AM IST onwards on Sunday, March 13

Spanish tennis legend Rafael Nadal will face off Sebastian Korda in the second round of the Indian Wells Masters on Sunday. Nadal is the favourites to enter the next round after clinching the Australian Open, Melbourne and Acapulco ATP titles. He will be looking to weave his on-field magic as part of mission 2022 after the record 21st Grand Slam.

Another veteran Sebastian Korda will be looking to impress against Nadal after failing to leave a mark in the ATP tournaments this year. He has won 6 out of 9 matches in the ongoing calendar year.  The 21-year-old will face stiff competition and could rely on powerful serve and groundstrokes that helped his Australian Open Final competitor Daniil Medvedev win the first two sets against Nadal.

World No.1 Daniil Medvedev has got a very easy draw in form of Tomas Machac from the Czech Republic. The 21-year-old qualifier will be playing Medvedev after victories in the Qualifying stages of the 1000 ATP tournament. However, he will face an uphill task against the Russian who will be keen to make an impact from Game 1 after Nadal delayed his maiden ATP titles at the Australian Open & Mexico Open last month.

Greek giant Stefanos Tsitsipas will face off Jack Sock of the USA in his opening contest of Indian Wells Masters. The latter beat Argentina’s Juan Manuel Cerundolo in straight sets to set the clash against the World No.5. Tsitsipas is having a phenomenal season and impressed at the Australian Open and ATP Rotterdam Open. He has already notched 14 wins in 19 games this season. Rival Sock, meanwhile, has registered 6 wins in 9 matches. Tsitsipas is expected to easily beat World No. 147.

Naomi Osaka will play Russia’s Veronica Kudermetova in the second round of Indian Wells on Sunday. The Japanese is coming on the back of 3 sets victory against Sloane Stephens while Kudermetova defeated Arantxa Rus of the Netherlands in straight sets. The four-time Grand Slam champion Osaka is expected to make light work of Kudermetova as she looks for her first WTA title and end a dry run of the trophy after winning the Australian Open last year.

US Open finalist Leylah Fernandez will play Amanda Anisimova in the second round of Indian Wells. She was thrashed in the exhibition match by Paula Badosa and needs to quickly return to winning ways if she wants to carry on her Mexico Open heroics. She has already won 6 out of 8 games and looks set for a brilliant 2022 after clinching the Monterrey Open. Her opponent from the USA, Amanda Anisimova, is proving to be a tough contender as she has already defeated the likes of Naomi Osaka, Paula Badosa and Belinda Bencic among top-ranked players in the ongoing calendar year.  She has notched 10 wins in 13 games this year.

US teen star tennis player Coco Gauff will play counterpart Claire Liu in the opening contest. She will be looking to finally shine in the upcoming contest after failing to live up to expectations at the Australian Open and Doha Open. World No.17 has already lost 5 of her 12 matches in the ongoing calendar year. She will be in the quest for her maiden WTA title in 2022 and repeat her grand slams magics last season. Her opponent Claire beat Viktoriya Tomova of Bulgaria in straight sets to enter the second round of the WTA 1000 tournament.