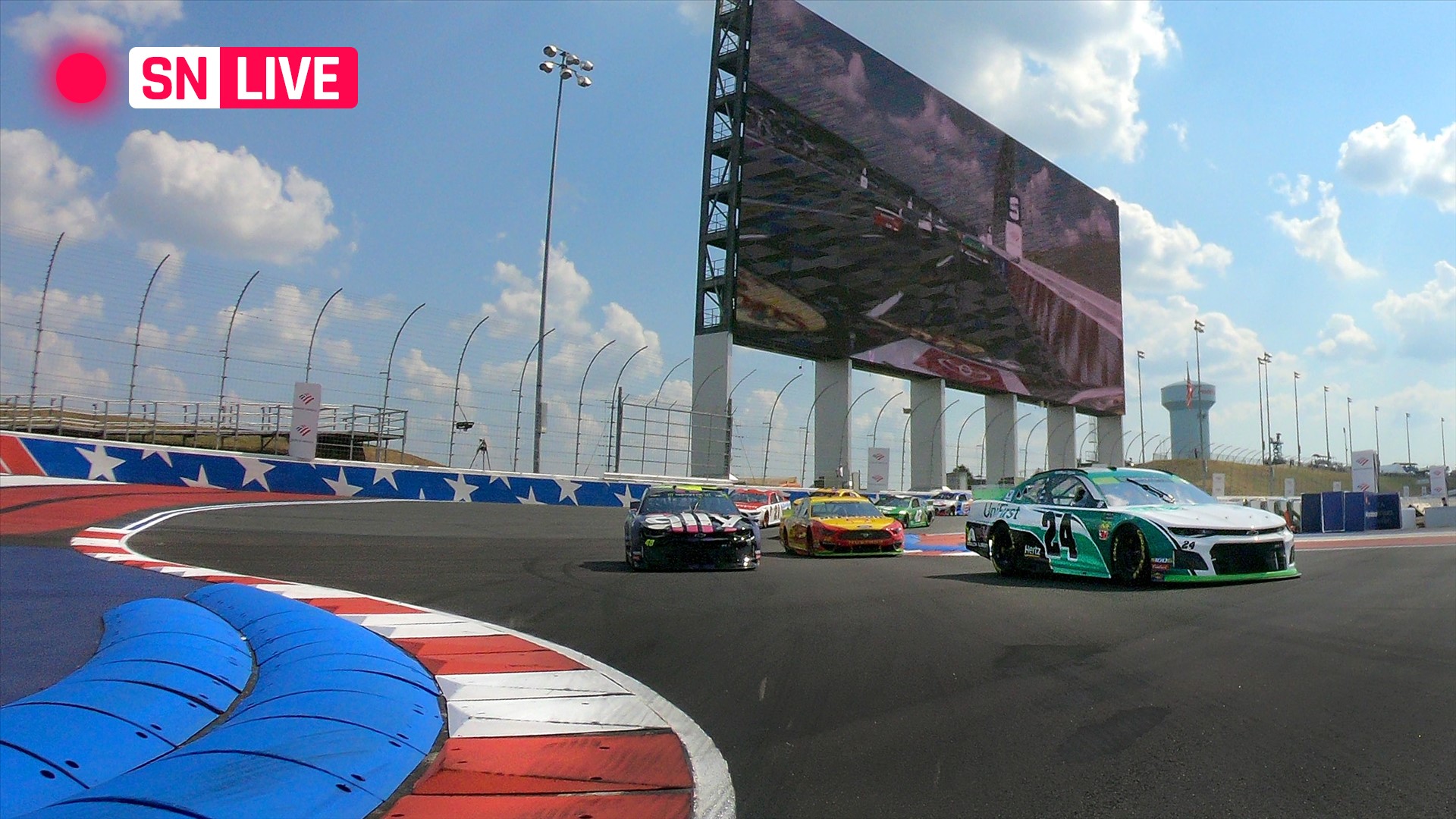 There will likely be chaos Sunday as 39 cars line up for the final race of the NASCAR Cup Series playoffs Round of 12.

The Bank of America ROVAL 400 on Charlotte Motor Speedway’s road course will be the last opportunity for 11 of the 12 playoff drivers to advance to the Round of 8. Denny Hamlin qualified after his win in Las Vegas two weeks ago. He leads the playoff standings with 3,116 points. Kyle Larson dropped to second after suffering a crash at Talladega. He trails Hamlin by 19 points.

Chase Elliott, who is seventh in the standings, has won on Charlotte’s 2.28-mile course each of the past two years. Another win by him Sunday would give Hendrick Motorsports the perfect boost. The team has earned just one win in the playoffs (Larson) and two Hendrick drivers face elimination. William Byron and Alex Bowman are both outside the top eight.

As the playoffs become more competitive, chaos ensues. Monday’s weather-shortened race at Talladega, which was won by non-playoff driver Bubba Wallace, increased the likelihood of chaos Sunday at Charlotte.

Sporting News is tracking live updates and highlights from NASCAR’s playoff race Sunday. Follow for complete results from the Bank of America ROVAL 400.

5:45: Kyle Larson heads past the checkered line to advance further in the playoffs and win his seventh race of the season.

5:43: Byron goes onto the grass and into the wall with two laps to go. Buescher takes third and trails Larson by nine seconds going into the final lap.

5:40: Truex Jr. spins out in the back of the pack, risking his playoff standings.

5:37: Larson stretches away from Reddick and has a two-second lead over Byron with four laps to go.

5:35: Byron makes his way up to third as Chris Buescher aggressively presses Hamlin on the corner.

5:33: Larson takes the lead from Hamlin as he passes from the inside. Hamlin falls to third as Reddick stretches ahead.

5:29: Caution is brought out with 10 laps to go. Keselowski is in the final spot above the cutline.

5:26: Harvick misses the corner on turn one and crashes into the wall. Harvick is out of his car as his hood is up in flames. The crash ends his chances at clinching a playoff spot as he falls far below the cutline.

5:25: Larson gets inside of Reddick and fights for second.

5:23: Kurt Busch is forced onto the grass as he misses the chicane. Reddick passes Larson to put pressure on Hamlin.

5:20: Hamlin takes the lead following the green flag with 14 to go. Larson pressures his bumper on turn six. Hamlin gets the advantage following the chicane.

5:14: Caution for debris is brought out following the wreck.

5:11: Byron gets contacted in the rear, forcing him to miss the chicane and push him back to the 11th position with 18 to go.

5:10: Keselowski spins out and is stopped on the track after a rear tire rub. He is forced back to ninth in playoff standings following the chicane.

5:08: Hamlin leads the pack into the green flag followed by Reddick. Larson is battling Byron for third.

5:04: Bowman is forced to the rear after speeding on pit road.

5:00: Elliott’s bumper breaks loose and caution is brought out with 23 to go. Keselowski is five points ahead of the cutline while Harvick is five points below.

4:56: Elliott’s bumper flails behind him after the repair cover breaks. He reports a left rear tire rub with 26 to go.

4:52: Hamlin hands the lead to Byron as he heads to pit road. Hamlin falls back to eighth following the pit stop.

4:48: Denny Hamlin takes the lead after Buescher heads to pit road. DiBenedetto trails by nine seconds, followed by Byron. Harvick is two points above cutline while Elliott is two points below after the pit stop.

4:40: Byron holds a two-second lead ahead of Reddick with 35 laps remaining.

4:34: Elliott confirms he is losing about a second a lap and is running at the 33rd position, 11 points below the cutline with 39 to go.

4:30: Denny Hamlin drops to sixth after missing the backstretch chicane.

4:25: Larson gets past Busch at 18th making his way back into the pack.

4:17: Allmendinger goes to the side and falls to the rear. He heads to pit road and determines his car has an engine failure, which prohibits him from continuing the race. Elliott is attempting to meet minimum speed.

4:12: Elliott falls below the cutline as he heads onto pit road to assess the damage. Harvick appears to have some damage on the front of his car.

4:10: Chase Elliott suffers severe damage to his track bar following contact from Harvick that sent him into the wall. Cole Custer was caught in the path and spun out onto the grass. Joey Logano escaped unscathed.

3:57: Elliott creeps up past Harvick at second. Kyle Busch clinches a win in the second stage.

3:56: Larson gets back up to seventh, and lands above the cutline on the final lap. Harvick falls below the cutline.

3:36: Larson falls below the cutline with 13 laps remaining in the second stage. He fighting to keep his position in the middle of the pack while dealing with an alternator belt issue.

3:34: Kyle Busch takes the lead followed by Harvick and Byron coming off the caution.

3:32: Larson and Alex Bowman will head to pit road for a battery change. Bowman gets his tires changed and goes green after his crew chief advises for the battery change at the end of the second stage. Larson had his battery changed, but his crew couldn’t fix an issue with the alternator belt.

3:28: Ricky Stenhouse Jr. pushes Chase Briscoe, and causes him to spin out on the front stretch. Caution is brought out as he gets going again.

3:12: Elliott clears Allmendinger and takes a victory in the first stage.

3:11: Blaney and Elliott close in on Allmendinger, who holds the lead going into the final lap.

3:10: Ryan Preece spins and goes up against the wall. Following evaluation, he can continue.

3:08: Allmendinger and Blaney fight for the lead coming off the caution.

3:05: Denny Hamlin gets a penalty for speeding on pit road that forces him to start at the tail end of the field with four laps to go in the first stage.

2:59: Ryan Newman suffers a tire issue that causes him to spin and crash into the wall, just missing Keselowski. After returning to pit road, he is confirmed out for the day.

2:56: Blaney, Logano, and Elliott extend their lead from the pack with eight laps to go in the first stage.

2:53: Keselowski is pushed by Alex Bowman and spins out. He’s able to get going again from the back.

2:49: Ryan Blaney takes the lead coming off the caution. Joey Logano and Chase Elliott fight for second in the pack.

2:42: Bell gets a penalty for speeding on pit road.

2:41: Christopher Bell comes into pit road early for tires with no fuel. Hamlin leads the pack into pit road ahead of the competition caution.

2:38: Almirola takes a hit and goes for a minor spin, but goes to the back of the pack.

2:20: Engines are fired ahead of the green flag.

2:10: The flyover kicks off the starting procedures at Charlotte Motor Speedway.

1:45: Drivers are being introduced ahead of this afternoon’s race. Here’s one of the most popular in Charlotte.

1:30: NASCAR confirms that Garrett Smithley is headed to the rear after multiple tech failures.

How to watch NASCAR at Charlotte

Snider, Dave Burns and Parker Kligerman will be the pit reporters. Rutledge Wood will provide additional reporting during the race.

Denny Hamlin moved into the lead in the standings with a seventh-place finish at Talladega. He passed Kyle Larson, who dropped to second after a 37th-place finish brought on by a wreck. Larson also lost a lot of his cushion between his place and the playoff cut line. He’ll enter Sunday 22 points ahead of ninth-place driver Kevin Harvick.

The playoff bubble has a lot of pressure on it after Talladega. The difference between sixth place (Ryan Blaney) and ninth (Harvick) is just 15 points. Between the bunched standings, the fact that 11 of the 12 drivers are still fighting for a Round of 8 spot and the Roval’s history of wrecks, Sunday promises more chaos before NASCAR reduces the playoff field by four drivers.

Here is the complete NASCAR starting lineup for Sunday’s playoff race at Charlotte Motor Speedway, the Bank of America ROVAL 400. Playoff drivers are denoted by a “P” next to their names.