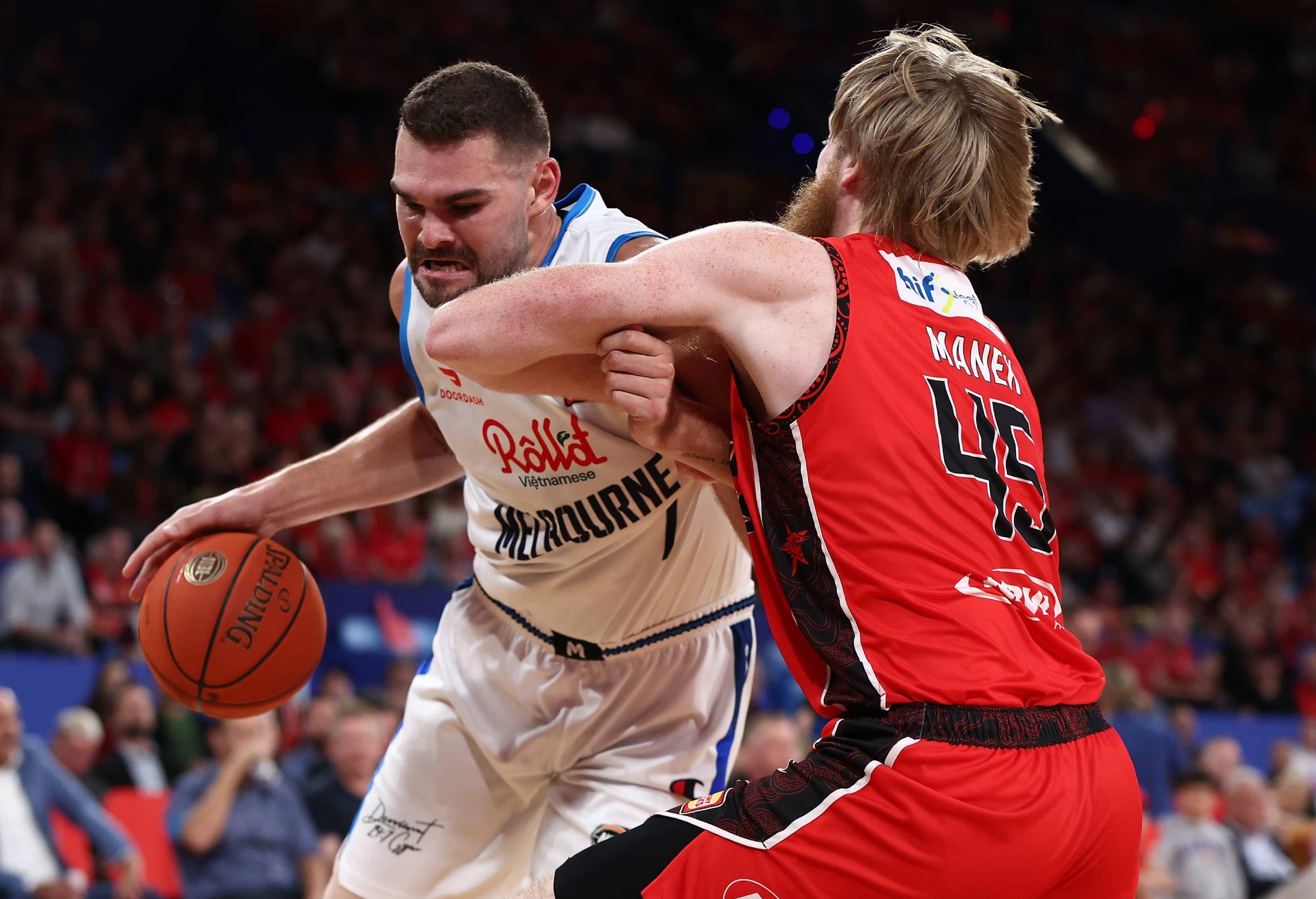 The NBL’s first active openly gay player Isaac Humphries has applauded the league’s decision to host a pride round for the first time.

The NBL’s pride round begins from Wednesday and across nine games, players will be invited to wear jerseys that feature a pride logo on it. Across the week, all courts will display that logo as well as a pride progress flag.

The NBL confirmed to AAP that players would be permitted to play wearing their regular jerseys if they would prefer.

Players, coaches and staff also have the option to participate in LGBTQI awareness training as part of pride round.

“I welcome the NBL’s inaugural Champion Pride Round, as it is another step towards the League and basketball becoming a more comfortable and welcoming environment,” said Melbourne United’s Humphries, who came out earlier this season.

“Since I made my announcement, not only has it made me feel free and happy, but it has also inspired me to help create serious change and set an example that you can be a professional athlete, or anything you want to be, and still be gay.

“The support I have received has been overwhelming and I’ve been so thankful for that. The challenge now is to help others on their journey and make a real change.”

The NBL’s pride round follows pride games scheduled in the AFL, Super Netball and A-Leagues during the most recent seasons. The Super Rugby hosted its first pride round in 2019

NRL club Manly faced resistance from members of their playing group for introducing an inclusion jersey this season without player consultation.

The NBL has developed the round in cooperation with its players union, the Australian Basketball Players’ Association (ABPA).

According to ABPA CEO Jacob Holmes, the round has the support of the players.

“The Pride Round provides an opportunity to celebrate the value of diversity within the League and society,” he said in a press statement.

NBL commissioner Jeremy Loeliger expected some players may not warm to pride round but that the initiative was nevertheless worth pursuing.

“We acknowledge, at times, there will be challenges with various stances we take as an organisation and they may conflict with some people’s beliefs,” he said in a statement.

“Regardless, we will continue to work together to support each other, and we will always respect that people may have different views, opinions and values to ours.

“Basketball is for everyone and we have always been strong advocates for diversity and inclusion.

“We will do all we can to ensure the NBL is a community where everyone is welcomed and supported, and individuals are encouraged to be themselves without fear of discrimination or judgement.”

South East Melbourne coach Simon Mitchell fears Ryan Broekhoff’s NBL season may be over after the ex-NBA swingman went down injured in the 112-91 win over Perth Wildcats that keeps the Phoenix’s finals hopes alive.

Broekhoff appeared emotional during a timeout in the fourth quarter in Melbourne on Sunday as he told Mitchell he had tweaked his groin.

The former Dallas Maverick had enjoyed his best game of the season with 26 points but played no further part and was consoled by his teammates at courtside.

Broekhoff, whose season ended early last year with a shoulder complaint, was up and about at the end of the game with ice on his injury. He will undergo scans on Monday.

“It’s horrible. The guy just can’t take a trick but it’s professional sport. We’re just hoping for the best and hopefully it’s not too bad.

“If history has given us a lesson then it’s probably not going to be good news for us or ‘Rowdy’ (Broekhoff).”

The Phoenix came into Sunday’s game seventh on the ladder with only one win to their name since Christmas and could all but kiss finals goodbye if they lost – particularly given tough games ahead with Cairns and Sydney.

But the hosts led from the outset at the State Basketball Centre, starting with a 12-3 run that featured two Broekhoff triples in quick succession.

While the Wildcats came within one point on three occasions later in the game, they never took the lead as the desperate Phoenix had the better of an offence-driven game.

Broekhoff had six triples from nine attempts in the first half, going into the main change with 22 points, more than he has scored in a full game all season.

He cooled off as the contest went on but the Phoenix had other avenues to basket.

Big man Alan Williams (27 points, 14 rebounds, six assists) was a threat in the paint as the Phoenix kicked their habit of dropping off in second quarters.

Bryce Cotton was the Wildcats’ best with 25 points and four assists but the only man who can rival Cotton for scoring this season, Phoenix star Mitch Creek (20 points, six assists, eight rebounds), took control late to ensure a comfortable win.

The Wildcats had come off a short turnaround, having beaten the Sydney Kings at home on Friday, and a flight cancellation meant they did not arrive in Melbourne until after midnight on the night before the game.

“Those (situations) can go one of two ways, you can come out with great energy and spirit and play really well,” said coach John Rillie. “We just couldn’t get over the hump tonight.”

Sydney Kings coach Chase Buford is remaining calm after the reigning champions’ first back-to-back losses of the season came just weeks out from the NBL playoffs.

The largest crowd for any NBL game this season – 14,232 – turned out for a possible finals preview against the New Zealand Breakers, who claimed a 93-88 win that brings a four-game losing streak to a halt and has them closing in on a finals spot.

The Breakers had the Kings’ measure in the first half and shot better from the three-point line (seven from 14) than the Kings did from the field (nine from 27).

While the home side clawed back to take the lead again in a see-sawing final quarter, a Jarrell Brantley three-pointer in the final 15 seconds sealed the result for the visitors.

“It’s hard to win games against anybody when you miss as many point-blank shots at the rim as we did,” Kings coach Chase Buford said.

“I don’t think (the loss) is cause for concern. The start hurt us again, we spot them a lead early and then playing catch-up is hard to do sometimes.”

The Kings’ game plan typically relies on controlling the paint and outpacing their opposition but the Breakers found ways to frustrate Sydney on the offensive end, despite struggling to control the reigning champions on transition.

At halftime, no Kings player had registered double figures for points and MVP candidate Xavier Cooks had only one basket from the field from four attempts.

As Barry Brown continues to sit out with a groin injury, Will McDowell-White (20 points, 10 assists, six rebounds) and Brantley (30 points, nine rebounds, five assists) were the Breakers’ most prolific scorers and went into the half on triple-double watch with the visitors 14 points up.

Scoring dried up in the third quarter but Dejan Vasiljevic hit a three-pointer at a tight angle in the last ten seconds to reduce the deficit to two points and give Sydney all the momentum heading into the final change.

Cooks (11 points, four assists) showed flashes of his brilliant best in the final quarter, first levelling the scores with a lay-up and then sending a no-look pass to Vasiljevic to give the Kings the lead for the first time since the opening period.

With the scores tied, Brantley came up with a clutch play that could not be equalled by Kings big man Tim Soares, who missed his own shot from deep that could have levelled.

Breakers coach Mody Maor lauded his side’s ability to win during a busy period in the schedule, without Brown or Izayah Le’Afa (back injury) and after dropping seven of their previous nine games.

He expects Brown may be available for Thursday’s match against Brisbane.

“I’m very proud of our guys,” he said. “There was a lot of stuff stacked against us in this situation and they came out and played like men.”

A three-point shooting barrage has propelled Melbourne United back into the NBL top six with a 94-87 victory over the Adelaide 36ers.

Import Robert Franks (24 points, 10 rebounds) led the charge for the 36ers who, without Ian Clark (leg), could not contain the perimeter assault as they fell to their fifth straight defeat, their finals dreams now dashed.

“We’ve been able to put together some solid wins on the road against good teams in January,” Melbourne coach Dean Vickerman said. “Great start from us – CG (Goulding) got us going right off the first possession. The shot-making in the second half was quite incredible.”

The only sore point for United was luckless point guard Shea Ili going down early in the second half with his third bout of concussion for the season.

Swingman Antonius Cleveland opened Adelaide’s account with a stunning coast-to-coast dunk over big Marcus Lee but he was forced to sit for extended stretches after finding enormous foul trouble.

The Sixers’ season-long defensive woes were again being laid bare early but they lifted at the defensive end in the second term, behind the efforts of noted stopper Sunday Dech.

After falling behind by 10 points, Adelaide outscored Melbourne 13-2 across the last five minutes of the second quarter to pinch a one-point halftime lead.

With Goulding, Tucker and Rathan-Mayes – who was scoreless at halftime – combining for 9-of-12 from downtown for the term, Melbourne moved ahead 70-64 with one quarter to play.

Rathan-Mayes inspired an 11-0 run after the 36ers levelled the scores midway through the fourth before United held off an Adelaide 11-2 tear down the stretch as Cleveland fouled out and Tucker made some key plays.

“Clearly our defence hasn’t been good enough to help us get a few more wins,” 36ers coach CJ Bruton said.

“Tonight it was the three-point line that kicked our butt.”