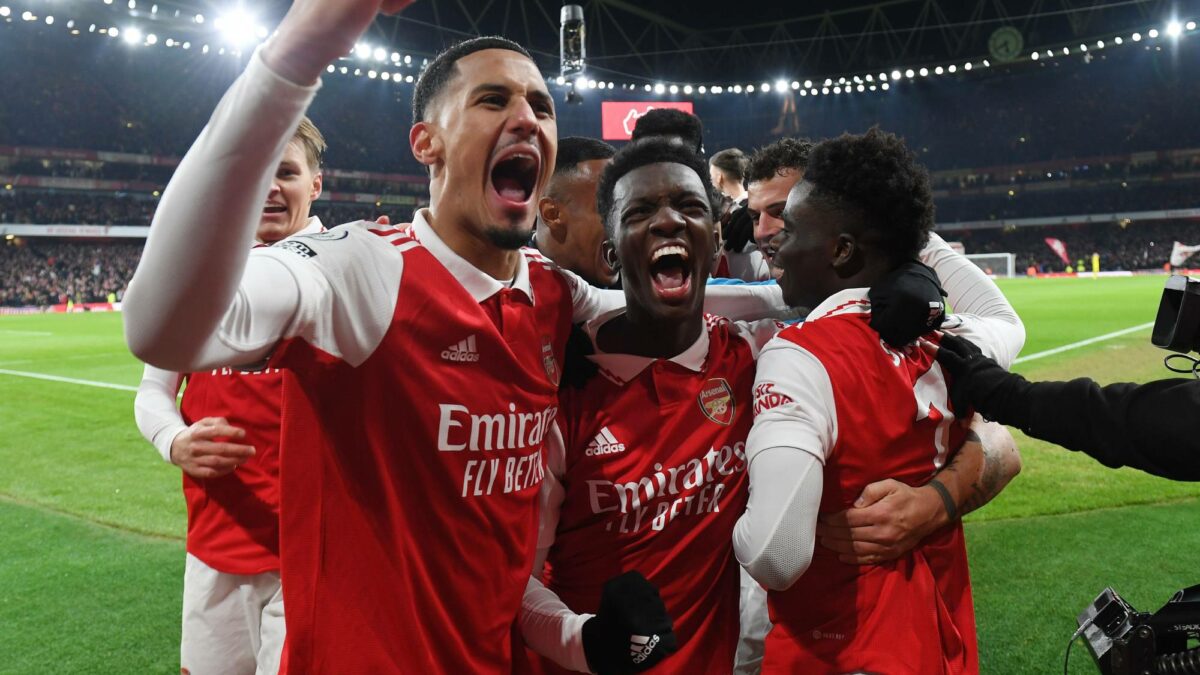 Arsenal’s quest for a first Premier League title since 2003/04 moved a little bit closer after a 3-2 victory over Manchester United, with stand-in striker Eddie Nketiah scoring late to deliver a statement win.

United had opened the scoring through another Marcus Rashford stunner, before goals from Nketiah and Bukayo Saka had the Gunners leading. Lisandro Martinez equalised before drama again intervened late on. On results like this are title-winning campaigns built.

Arsenal stayed five points clear of second-place Manchester City and have a game in hand. The top two must still meet each other twice in the league, so there is scope for a turnaround.

City fulfilled their side of the bargain earlier in the afternoon, with Erling Haaland marking a return to form – his dip in form had only moved him down to the plane of mortals – with another hat trick to dispose of Wolves.

But it will need Arsenal to slow down and Haaland to keep on scoring if the lead is to be overturned. Currently, there’s no sign of either of those things happening.

“Emotional, passion and a lot of quality — it doesn’t get much better than that,” Arsenal manager Mikel Arteta said.

“We never panicked, we kept believing.”

Remarkably, Arsenal have only dropped seven points from a possible 57 by the halfway stage of the season and have just come through a tough-looking run of games against Brighton, Newcastle, Tottenham and United by taking 10 points from 12.

With Haaland, though, there is hope for defending champs City.

The Norway striker moved to 25 goals in his debut league campaign in England by scoring all of City’s goals against Wolves. That would be enough to win the Golden Boot in the Premier League in any of the previous four seasons.

If Haaland stays fit, he is on course to smash those records.

The quickest a player had previously scored four hat-tricks in the Premier League was former Man United striker Ruud van Nistelrooy, in 65 appearances. It has taken Haaland just 19 matches.

“When he scores I don’t know how many hat tricks and goals (people say) he is the solution in our team and when he does not score a goal he is a problem in our team. This is a grey vision,” City manager Pep Guardiola said.

Arsenal and City meet for the first time in the league on February 15. Before that, they play each other at City’s Etihad Stadium in the FA Cup on Friday.

United and third-place Newcastle are both six points behind City now and likely focusing more on securing a top-four finish to get in the Champions League. Tottenham are a further six points back in fifth ahead of Monday’s game at Fulham.

United manager Erik ten Hag said it was “maybe” a reality check for his team.

Meanwhile, Leeds’ winless run in the league is up to six matches.

A 0-0 draw with Brentford at Elland Road moved them a point clear of the relegation zone but it was another frustrating game for the home fans.