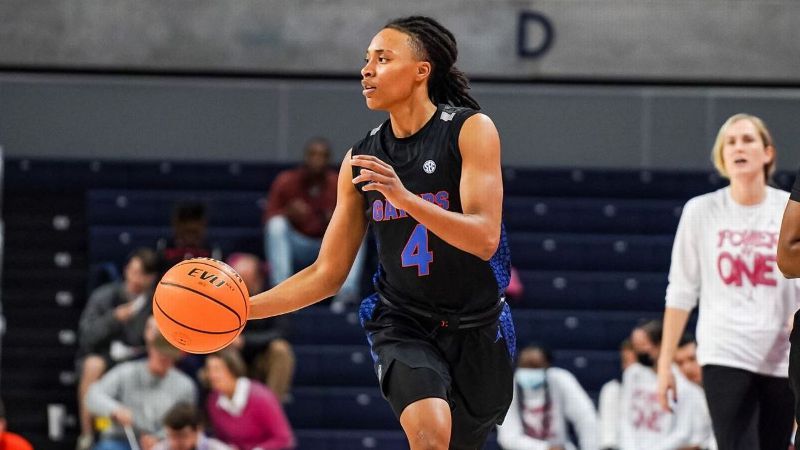 AUBURN, Ala. – Florida women’s basketball had to put together 40 minutes of hard-nosed basketball to overtake Auburn on Monday evening, and that’s just what they did, holding off a hungry Tiger team, 83-77.

Five athletes scored in double figures for the Gators (19-6, 9-3 SEC), led by Zippy Broughton in her homecoming with 18 points in addition to six rebounds, three assists and three steals.

A key difference in the game, Florida was impressive from the free throw line, knocking down 23 of their 28 attempts (82.1%).

The battle on the boards was dead-even between the two squads, with both teams pulling down 38 rebounds. Broughton led the Gators with six rebounds while Merritt and Rickards each brought down five of their own.

Defensively, Florida locked down the Tigers, forcing 20 turnovers throughout the evening. The Gators tallied nine steals, with Broughton and Smith leading the way with three steals each. The defensive intensity helped UF to a 15-9 advantage in fast-break points.

For the second time in as many outings, the bench put on a strong performance to propel the Gators. The Florida reserves outscored Auburn 28-7 off the bench, led by Moore’s 15.

The game began quickly for Florida, with the Gators opening with the first four points of the game. Rickards battled for an offensive rebound put-back on the opening possession, followed by a Smith floater in the lane. The Tigers, however, responded with a 6-0 run, holding UF scoreless for over five minutes.

Floor Toonders would break the scoring drought, connecting on the first three-pointer of her collegiate career with 4:13 remaining in the quarter. Again, the Tigers would respond and take a 14-11 lead late in the period, eventually taking a 17-16 lead into the second following an exchange of triples from each side.

After draining the three at the end of the quarter to keep the Gators within one, Moore would do it again at the start of the third to keep Florida within one at 20-19. Auburn would push their lead to four at 23-19 with 7:49 on the clock, but the Gators would use a quick 5-0 spurt, capped off with a three from Broughton, to reclaim the lead at 24-23.

With the score evened at 27, UF together a string of six points to open their largest lead of the half at 33-27. Defense fueled the outburst, as Smith made picked a pocket for two at 3:48.

Over the final three minutes of the half, both squads would trade punches with Florida taking the 39-36 lead into the break. Florida picked up their defensive intensity in the second quarter, forcing the Tigers into five turnovers while holding the opposition to 6-of-18 shooting in the period. For the half, UF forced seven total Auburn turnovers.

The Gators pulled out to a 43-37 lead to start the second half behind buckets from Smith and Faith Dut, but the Tigers used an 10-0 run over two minutes to take the lead, 47-43, with 6:03 remaining in the quarter. Broughton would put an end to the streak, scoring five straight points to give the Gators the lead back with 5:15 on the clock.

Auburn reclaimed the lead off of Jala Jordan three-pointer, but Merritt would pick up the intensity. After tying the game at 50 with a scoop-and-score, the sophomore would reject a shot at the top of the key and connect on two at the charity stripe for a 52-50 lead at the 3:27 mark.

Six free throws at the backend of the period, paired with eight points from Merritt in the quarter, helped UF to a 60-56 lead with one to play.

Any chance of an Auburn victory was put to rest almost right away in the fourth quarter. Moore, a senior leader for the Gators, once again made her presence known, scoring the first five points of the frame, helping UF to a 67-55 lead with 8:15 on the clock. Florida’s lead would eventually peak at 14 points before taking the victory, 83-77, in Auburn Arena.

The Gators will be back in action on Thursday, Feb. 17 when they host Arkansas for their Play4Kay game in Exactech Arena.