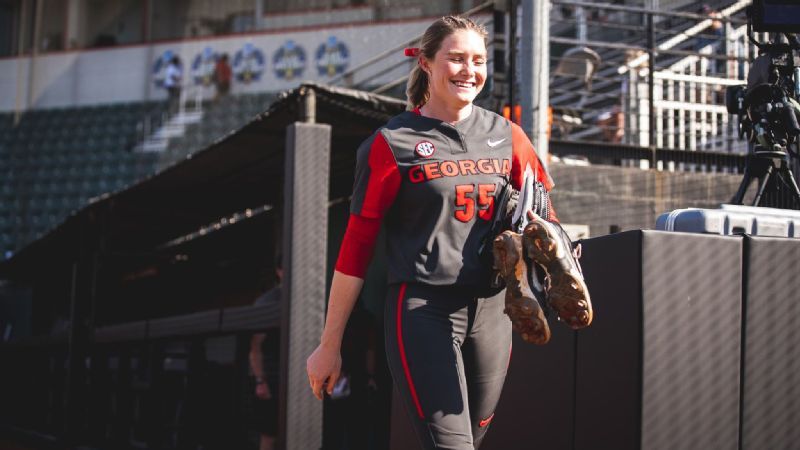 ATHENS, Ga. – Down three in the sixth, the 15th-ranked Georgia Bulldogs plated eight runs in the bottom of the inning to come back and defeat Georgia Southern 12-7 Wednesday evening at Jack Turner Stadium.

Sophomore Madison Kerpics worked two perfect innings with four strikeouts in her start in the circle. Britton Rogers (four runs, four hits) and Lauren Mathis (two runs, three hits) each saw time out of the pen. Freshman Kylie Macy (8-1) earned the victory, working two and a third innings, striking out four and allowing one run on one hit.

The Bulldogs plated four runs in the opening frame. With two on and one out, three-straight RBI singles from Lacey Fincher, Jayda Kearney, and Kuma drove in three runs. A groundout from Black plated the fourth run of the first inning, 4-0 Georgia.

A five-run fourth inning for Georgia Southern (8-18) pushed the Eagles into the lead, 5-4.

Solo home runs in the fifth and sixth innings widened the Georgia Southern lead to three, 7-4.

An eight-run sixth propelled the Bulldogs ahead of the Eagles. The scoring started when leadoff batter Kuma scored from first on a double off the bat of Black. Pinch hitter Savana Sikes then drove in Black on a single to center. Mosley stepped in and blasted a three-run home run to right center, putting Georgia ahead 9-7. Fincher went back-to-back with Mosley, sending a solo shot off the video board in left. The scoring wasn’t done yet. Kearney’s second hit of the night was a single through the right side then she scored from first on a double to the wall by Kuma. Kuma then scored on a single through the left side from Black, her second RBI of the inning and third of the night. When it was all done, Georgia led 12-7.

Macy held the Eagles in the seventh to complete the comeback.

Georgia travels to Tuscaloosa for a three-game series at No. 4 Alabama this weekend. The series begins Saturday at 4:30 p.m., EDT, on ESPN2.

On his team’s ability to overcome the deficit…

“I thought it was competitive, Wednesday night softball. Like I just told the team, I’m proud of the way we started. I thought Madison [Kerpics] was sharp there in the top of the first. We came out and strung together some good at-bats. Then, I think we had a little lull there mentally. As I told the team, this game will humble you quickly when you’re not in a competitive mindset. The other team was and hats off to them. I thought they really competed, and they punched us right in the mouth there. We deserved it. I think we had a little lull there, and I can coach us better during that stretch, and our players can manage that stretch better. At the end of the day, I am proud of the way that they got a competitive mindset back, and we showed some of that resilience that we’ve had all year. When we’re in that place and we’re disciplined at the plate, we can be a pretty explosive offense.”

On whom has stepped up as the voice of the team…

“At the end of the day, they all have personalities that add to our environment. Every single player who’s on our team has the opportunity to either add to the environment or take away from it. We have a lot of people that are adding right now, and I think that is why, generally speaking, we’ve been a fairly consistent thinking team. We’re not always perfect but fairly consistent in our mindset and our ability to be resilient and competitive. Some of the older players, they’ve been through this, so they have a good voice. You have a lot of people who have a voice, and I’m just proud of the environment that we have right now.”

“Well, our pitching has to continue to control the ball better. They have to be able to change speeds and keep the hitters off balance. I didn’t think we did a really good job of that tonight. We’ll go back and watch the film and see what led to that. The place that I’m disappointed in right now is that we’re not playing defense the way that we’re capable of. I refuse to believe that we’re anything other than a really good defensive team, and we’ll just keep working and fighting the fight until that shows up again.”

On her mindset before her home run…