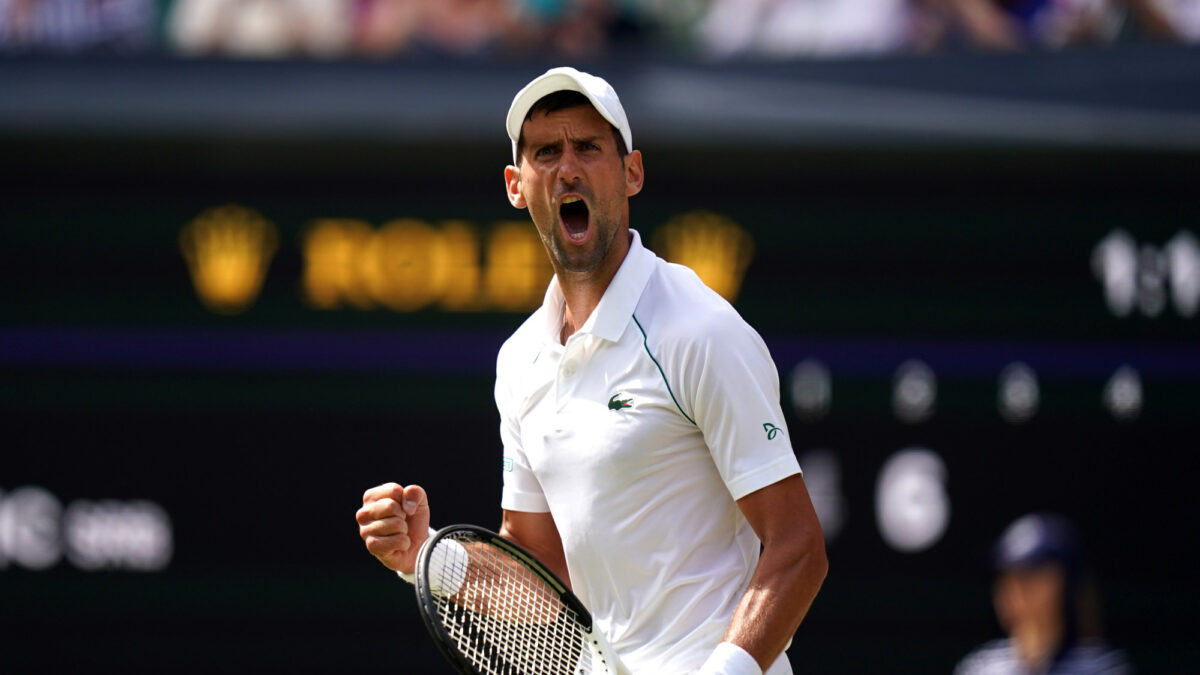 Novak Djokovic has ended Nick Kyrgios’ fairytale Wimbledon run with a typically magnificent performance in the final, securing a 21st grand slam and seventh championship at the All England Club in four captivating, controversial and thrilling sets.

The Aussie claimed the opening set and looked well and truly a chance of an upset victory, but the Serb regrouped to pounce on several critical moments in the second, third and fourth sets, winning 4-6, 6-3, 6-4, 7-6 (3).

The victory moves Djokovic into outright second on the list of most men’s grand slam titles, ahead of long-time foe Roger Federer’s 20, with Rafael Nadal (22) the only man ahead.

But despite the inevitable outbursts, most notably a meltdown at the end of the third set that helped Djokovic close it out, Kyrgios can leave with his head held high, having produced some scintillating tennis that would have been enough for victory against almost anyone else in the game.

“He’s a bit of a god, I’m not going to lie. I thought I played well!” Kyrgios admitted in defeat.

“It’s been an amazing couple of weeks for me personally… I’m so tired! Myself, my team, I think we’re so exhausted, we played so much tennis.

“Hopefully, maybe one day, I’ll be here again, but I don’t know about that.”

Djokovic, too, was full of praise for Kyrgios after his victory.

“Nick, you’ll be back. Not just Wimbledon, but finals,” he said.

I know it’s tough to find consolation words after a tough loss like this, but you showed why you deserve to be one of the best players in the world, particularly on this surface.

“I think you are a phenomenal tennis player, and athlete… everything is starting to click for you.”

Poking fun at his previously stormy relationship with the Australian, which has now been mended, Djokovic added: “I never thought I was going to say so many nice things about you, considering the relationship.

In two previous encounters with, and defeats to, the enigmatic Australian, Djokovic had never so much as broken serve; and Kyrgios wasn’t about to give him any clues in a blistering opening.

Keeping Djokovic guessing with a tactical tapestry, chipping and charging on his serve, slicing regularly and even rolling out a trademark underarm serve, the six-time champion could only muster two points on Kyrgios’ serve by the tenth game of the opening set.

“I really like the way he’s tactically come out in these first four games,” mused Todd Woodbridge on Nine.

“He’s keeping everything off balance for Djokovic.”

By that point, Kyrgios had drawn first blood, breaking for a 3-2 delight to delight a one-sided crowd keen to see a new champion crowned.

A brief hiccup threatened when the Aussie was taken to deuce serving for the set, but a thundering ace eased the tension, securing the set 6-4.

With 14 winners to just four unforced errors, it was thoroughly deserved, too. Belying his status as the lowest-ranked Wimbledon men’s singles finalist since countryman Mark Philippoussis in 2003, Kyrgios was on fire on the grandest stage of all.

For the third consecutive match at the All England Club, Djokovic would need to rally from a set down.

But just as he’d done against Jannik Sinner and Cameron Norrie to make it to the final, the Serb raised his game accordingly. Moving substantially farther back on Kyrgios’ first serve, having looked to stand aggressively close and paying the price in the opening set, Djokovic trusted his unparalleled returning skills to blunt the Aussie’s trump card.

It worked: the aces dried up, as did the short returns, as Djokovic came screaming back into the contest. Remarkably, Kyrgios landed a perfect 10 from 10 on his first serve in the first four games of the set: yet he’d been broken to love, a stroke of luck off the net securing Djokovic his first ever break of the Kyrgios serve.

“Too much effort, too much effort,” Kyrgios complained during the game, as Djokovic found his groove and began to work over the Aussie.

Suddenly under the pump, outbursts from the Australian firebrand became more and more common. Frequently pleading for his players’ box to offer more support, Kyrgios was still capable of miracles – an incredible chase of a Djokovic drop shot bringing the crowd to its feet.

With three break points to get the set back on serve, this was Kyrgios’ chance. But Djokovic hasn’t just stumbled on 20 grand slam titles: locking down and refusing to offer anything cheap, Kyrgios would thrice crack under the strain to be brought back to deuce.

Saving a fourth break point with an exquisite drop shot, far more effective today against the slower Kyrgios than they had been against the speedy Sinner in the quarter-final, the opportunity was lost.

“Champion’s tennis, that,” commentator Andrew Castle gushed: at one set all, the champion was back.

Kyrgios’ temper continued to be tested in the third set; after a rowdy heckler distracted him sufficiently for a double fault to be taken to deuce, he earned his first code violation of the match, venting furiously at chair umpire Renaud Lichtenstein for not acting earlier.

A pair of booming serves rescued the game, but Kyrgios wasn’t done.

“She’s drunk out of her mind… she’s the one who looks like she’s had 700 drinks,” he said to Lichtenstein as he once again attempted to get her ejected.

Around the implosions, the Kyrgios game remained strong; an outrageous backhanded volley off an imperious Djokovic cross-court backhand drawing applause from even the Serb.

But at 5-4, things came to a head; an increasingly testy Kyrgios’ serve began to lose its venom, with Djokovic pouncing on the opportunity. 40-15 became deuce, and then a break point; after escaping trouble for much of the set with a clutch serve, he wouldn’t escape again, finding the net to let Djokovic serve for the set.

“40-love, 40-15, then nothing. Why? Why do you stop? Say something?” Kyrgios ranted at his box at the change of ends. Unlike Stefanos Tsitsipas, though, Djokovic wasn’t to be distracted. A pair of narrow misses from Kyrgios closed out the set in the Serb’s favour: you just can’t miss against Novak Djokovic.

From 0-40 when serving for the second set, and then forcing a break from 40-0 down late in the third, Djokovic had come up clutch in both the match’s flashpoints.

As the rants continued from Kyrgios at the sit-down, Woodbridge was aghast.

“It’s hard to watch from my perspective… he’s self-destructing,” the former doubles great lamented before the fourth set.

“You’re a set-all, four-all, in a Wimbledon final and he’s disengaged mentally and left the court.

“That first set there wasn’t one word uttered until he got a break and he said ‘yeah’. Since then, everything is outside the perimeter of the tennis court.”

The break in play seemed to do the trick, though: a rejuvenated Kyrgios began to wrest control of his service games back for the first time since the opening set.

Noted Woodbridge: “When he plays his best tennis he has this adrenaline and is highly strung… you can sense right here he’s come off that from the interaction at the end of the third, somehow.”

With the let cord the new source of Kyrgios’ frustration – adamant, not for the first time in his career, that the vibration sensor on the net was overly sensitive – aces began to fly thick and fast again.

But it wasn’t enough to lift his game, for Djokovic was in full flight by now. A perfectly placed Kyrgios drop shot would have been enough against any other player, perhaps in the history of the game: but the 20-time grand slam champion tracked it down, and flicked a mesmerising passing shot that Kyrgios could only watch sail by.

“This recovery and athleticism, and then that control? All you can say is too good,” Woodbridge laughed.

The Aussie’s serving would again be his saving grace for the game, but that point felt symbolic. 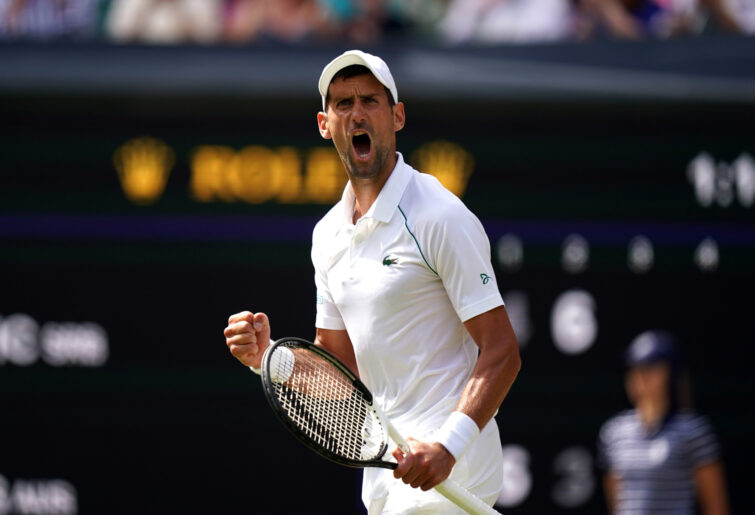 A bizarre moment when Kyrgios failed to challenge a forehand that clipped the line, which would have secured a 6-5 lead, could have been the tipping point: but was instantly followed by his 29th ace of the match, as the Aussie refused to yield.

The availability of challenges didn’t stop Kyrgios having another go at Lichtenstein, blasting the chair umpire for being too ‘hesitant’ in overruling errant calls.

With not a single deuce game to be found, let alone a break point, the set was destined for a tie-break. A booming second serve from Kyrgios that missed the T by a matter of millimetres was the first blunder from Kyrgios; an inopportune time to risk so much.

A shanked forehand into the net from Djokovic showed both men were feeling the strain of the occasion. A wide forehand, though, would hand the mini-break back, with Djokovic, as he’d done in the 2019 final against Roger Federer, locking down completely.

A wide backhand following an extraordinary Djokovic return of a near-perfect serve, and the gap was 4-1.

“The Kyrgios dream is coming to an end here, at the hands of a relentless performance from the six-time champion,” Castle said at the change of ends, with the score 5-1.

And with the Serb simply refusing to make a mistake, the errors would come at last: Kyrgios defiant to the end, two booming serves making Djokovic serve it out, but simply overwhelmed by perhaps the greatest tennis player of all time.