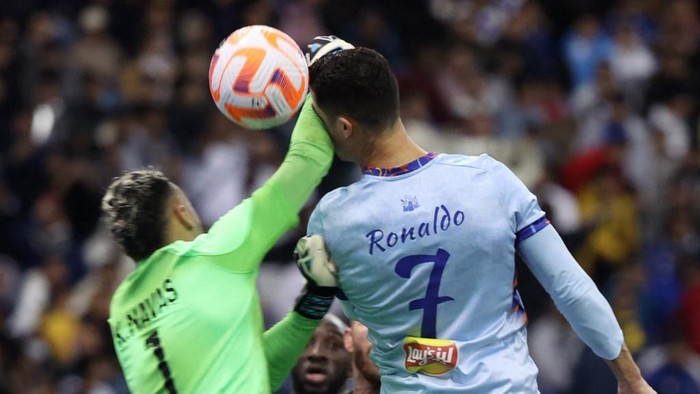 Riyadh – Cristiano Ronaldo stole the attention after scoring two goals even though the Riyadh All Star lost 4-5 to Paris Saint-Germain. However, Ronaldo experienced a bit of an unpleasant incident.

The Al Nassr football superstar started when the Riyadh All Star faced PSG at the King Fahd Stadium, Friday (20/1) in the morning WIB. Les Parisiens took the lead thanks to Lionel Messi’s flash goal when the game had not started for three minutes.

Riyadh All Star exerted pressure by trying to maximize Ronaldo’s heading ability. However, when a cross slid into the PSG penalty box Keylor Navas and Ronaldo were both about to welcome the ball.

The Costa Rican goalkeeper tried to punch the ball but it hit Ronaldo’s face, causing him to fall to the ground. Fortunately, the former Manchester United, Real Madrid and Juventus star was not seriously injured.

Ronaldo then took the Riyadh All Star penalty. The 37-year-old striker successfully netted the ball into the top corner of the PSG goal while equalizing the score at 1-1 in the 34th minute.

The French giants then took the lead again thanks to a Marquinhos goal. However, Ronaldo again made his name on the scoreboard after his header again beat Navas to balance the game before halftime.

Ronaldo then left the area of play after the hour mark to be replaced by Matheus Pareira. PSG responded by pulling out Messi and then entering Ilyes Housni.

In the process, Riyadh All Star had to recognize PSG’s superiority in the nine-goal drama. In the remaining game time, the Saudi Arabian team was only able to add two other goals from Jang Hyun-moo and Talisca while PSG managed to score three additional goals through Sergio Ramos, Kylian Mbappe (penalty), and Hugo Ekitike.

Cristiano Ronaldo is now on the verge of making his debut with Al Nassr. Al Nassr is scheduled to host Al Ittifaq in the continuation of the Saudi Arabian League on Monday (23/1/2023) in the morning WIB.